Hey guys. In order to generate some extra awareness of this blog I need your help. Here's the concept.

Back of baseball cards have a lot of neat stats, BUT they also provide some very interesting facts.  Sometimes they mention other players career achievements on the back. I would like to make a segment (not sure if it will be monthly or weekly or random) where I highlight the player in question.

In a way I see these segments becoming similar to a Spider-Man Team Up comic book.  It's still a Spider-Man comic, but each month a new "guest" will appear. 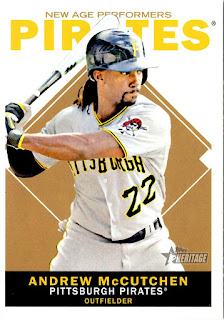 Today's card is a 2013 New Age Performers card (#NAP-AM) from Topps Heritage.  It compares Andrew's near MVP performance in 2012 to Tony Oliva's 1964 season. 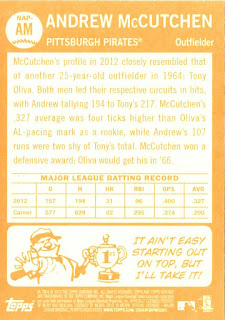 Being a baseball fan, obviously I am aware of Tony's accomplishments in short recognition.  It wasn't until I read this card though that I decided to research all that Tony accomplished in his brief injury ridden career.

In reviewing his accomplishments, I think that Tony Oliva belongs in the Hall of Fame.  He missed getting voted in by the Golden Era Committee by 1 vote in 2014.

Tony suffered many injuries which lead to him becoming a full time DH.  His first eight seasons lead to him being an All-Star which at the time was a record previously held by Joe Dimaggio. He had 1,917 career hits and 220 Home Runs. At his career peak 8 seasons, his Hall of Fame worthy career reached 42.3 Wins Above Replacement.

2)Pimp the contest by sharing on your blog, twitter, or other social media and provide a link in addition to suggesting a title for this segment
This will earn you some free cards

3)The name I find to be most clever will earn the Andrew McCutchen Triple Threads card you see below. 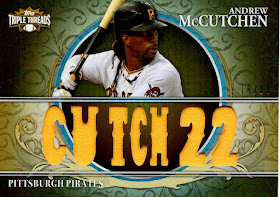 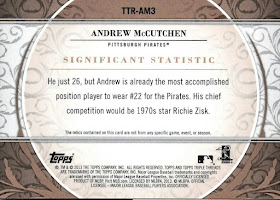 This contest will end on Opening Day 2017. If I find the suggested name to be offensive, you will not be qualified to receive cards.