With the All-Star game voting now available, I wanted to take this opportunity and ask everyone to vote for Andrew McCutchen.  I know his stats might not be elite, but ..... 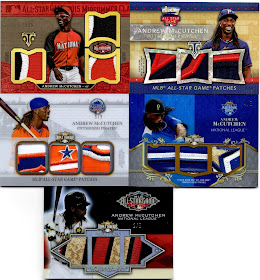 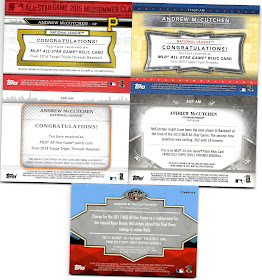 Each year Triple Threads puts out a subset of All-Star patches from the previous year's All-Stars.

Here they are as individual cards with a quick note about how Cutch did during the game.

2011
Cutch had one at bat. He grounded out to the pitcher. 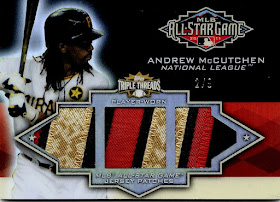 2012
Cutch was looking to be an early season MVP as he batted over .360 with 18 Home Runs.  He was a late selection for the Home Run derby, but was eliminated in the first round. 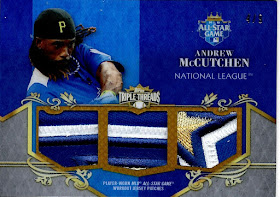 2013
This was Cutch's MVP season and he came in to the game as a pinch runner for Carlos Beltran.  He stole 2nd base as a Pinch Runner, but struck out in both his plate appearances. 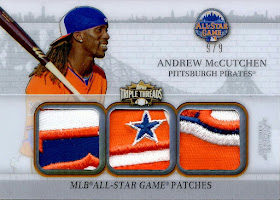 2014
Cutch started his first All-Star game and in his first at bat lined a ball up the middle that Derek Jeter (in his final season) made a diving stop to almost throw out Cutch.  He would later steal second. 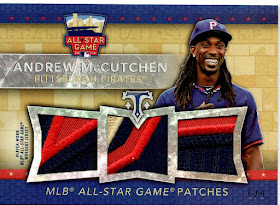 2015
Cutch was a starter again this year and blasted his first ASG HomeRun in his final at bat of the evening. 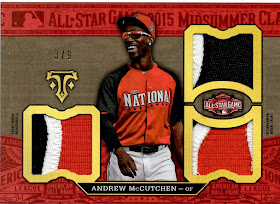 I have plenty more All-Star game cards of Cutch, but I will use the ASG FanFest weekend to show off those cards.

If you look at the standard counting stats, Cutch is having a terrible season, but if you look deeper into the numbers his BABIP (batting average balls in play) is almost 70 points below league average.  He has blistered a lot of balls that unfortunately have lead to outs.