This Day In Cutchstory: Epic Walk Off Win!

It was early in the 2018 season when San Francisco quickly realized the potential that a 31 year old Andrew McCutchen could bring to the ballclub.  The Giants were opening up their homestand against their rivals, the Los Angeles Dodgers, who had gone to game 7 of the previous year's World Series.

The rivalry of the Dodgers and Giants was fairly new to Cutch who had played his entire professional baseball career with the Pittsburgh Pirates.

On the evening of April 7th, 2018, the seventh game of the young season, Cutch showed up in a big way.

He collected 6 hits on the evening and raised his batting average 175 points.  Over the course of the night he saw 32 pitches thrown, but it was during a 12 pitch at bat in the bottom of the 14th inning with two men on and his team trailing by a run, that Cutch battled and fought off pitch after pitch until he finally drilled a homerun in the left field stands to secure the win for the Giants.
The boxtopper pictured above is from 2018 Topps Heritage High Numbers.  I actually have two of them.  The players featured on the front are Austin Gomber, Andrew Romine, and Caleb Smith. 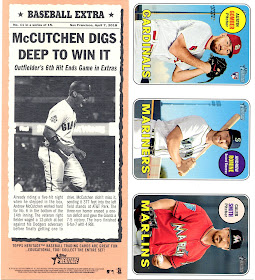 Since today is Sunday, here is a scripture about overcoming anxietity. 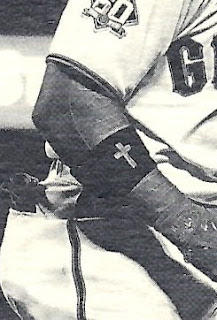 1 Peter 5:7
Cast all your anxiety on him because he cares for you.

Topps went crazy talking about Cutch's big day and nearly every 2018 post All-Star Break product (Update, Triple Threads, Heritage High Number, Bowman Best, etc) talked about Cutch's big day.  I will have plenty of cards to discuss This Day In Cutchstory in the future.
Collecting Cutch at 6:08 AM
Share