Thanks for Being a Loser, Greg Maddux...

Did the title of this post, get your attention?

I sure hope so, because had it not been for Greg Maddux losing a meaningless game to the Cincinnati Reds on September 28th, 2004 the Reds could have had a better draft position than the Pittsburgh Pirates in the 2005 draft.  That Reds victory over the Cubs ensured that no matter what, the Pirates would be drafting ahead of the Reds even with a three game set to close out the 2004 season looming.

Of course it is well documented that the 2005 draft class was a great draft class with names like Justin Upton, Troy Tulowitzki, Ryan Zimmerman, Andrew McCutchen, Jay Bruce, Ryan Braun, Alex Gordon, and the list goes on and on.

The Pirates had the 11th overall pick which they used on Andrew McCutchen and that pick transformed the entire organization.

The Reds used the following pick, 12th overall, on Jay Bruce.  Bruce was a highly touted prospect of his own and even cracked the top 5 overall prior to his call up.  An article was written on Blog Red Machine about Nick Senzel and the Reds prospect system since Jay Bruce made his debut.

Here are my cards of Cutch with Jay Bruce 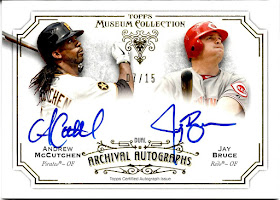 This dual on card autograph of Cutch and Bruce was released in 2012 Museum and is numbered to only 15 copies. 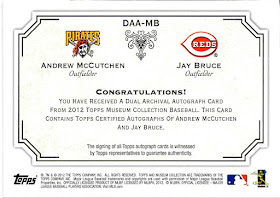 I also have a triple sticker autograph of Cutch, Bruce, and Troy Tulowitzki. 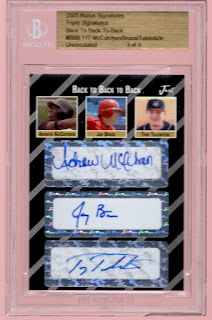 It is numbered 3 of 3 and was uncirculated. 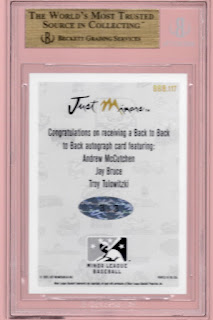