Prior to this year I hadn't owned Andrew McCutchen's best rookie card, 2009 Bowman Sterling. The reason was because the price point was just way too high ($35+ for the base and over $200 for color parallels).

After his down year last year and rough start this year, Cutch cardboard dropped in prices.

I had no issues with that in my pursuit of Collecting Cutch.  I finally grabbed not only the base refractor but also the gold version for $35 combined.  That was a huge accomplishment to add those two cards after being so stubborn about them for years.

Then this rarity hit the market.
I was the only bidder on it and it wasn't cheap, but I could finally cross it off the list. 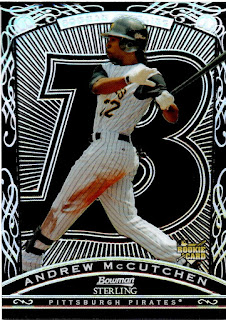 These Black Bowman Sterling never hit the market anymore.  When they do, they go for big time dollars because only 25 copies exist.  David Price and Rick Porcello both have graded copies over $100 listed now.  Nick Perez recently sold for $40. Nick Perez?  Michael Pineda over $45?

I knew if I didn't win this auction, I may not see another pop up again soon.  So I had to pounce on it.
Posted by Collecting Cutch at 12:09 PM