Is it just me or has it felt like Black Friday has been going on for a few weeks already?
It seems like everyone has been having Black Friday deals going on from electronics to furniture to appliances in stores like Kohl's, Target, and Home Depot.
Maybe this has always been the case, but it definitely feels more unique to this year than year's past.
There are a few things that I will be picking up for the new house today, which I am really excited about. 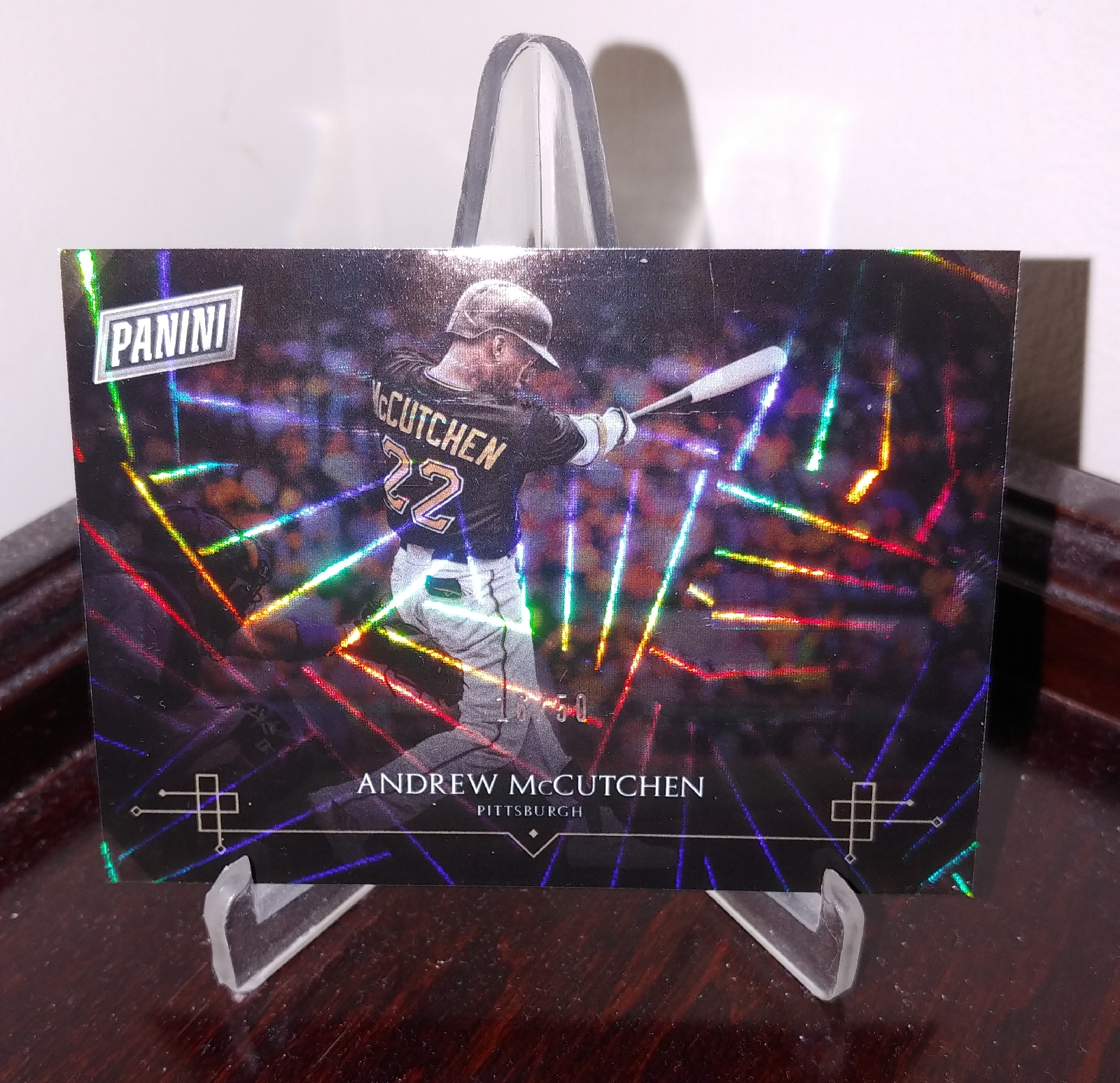 Above is the 2016 Panini Black Friday Decoy parallel numvered to 50 copies. 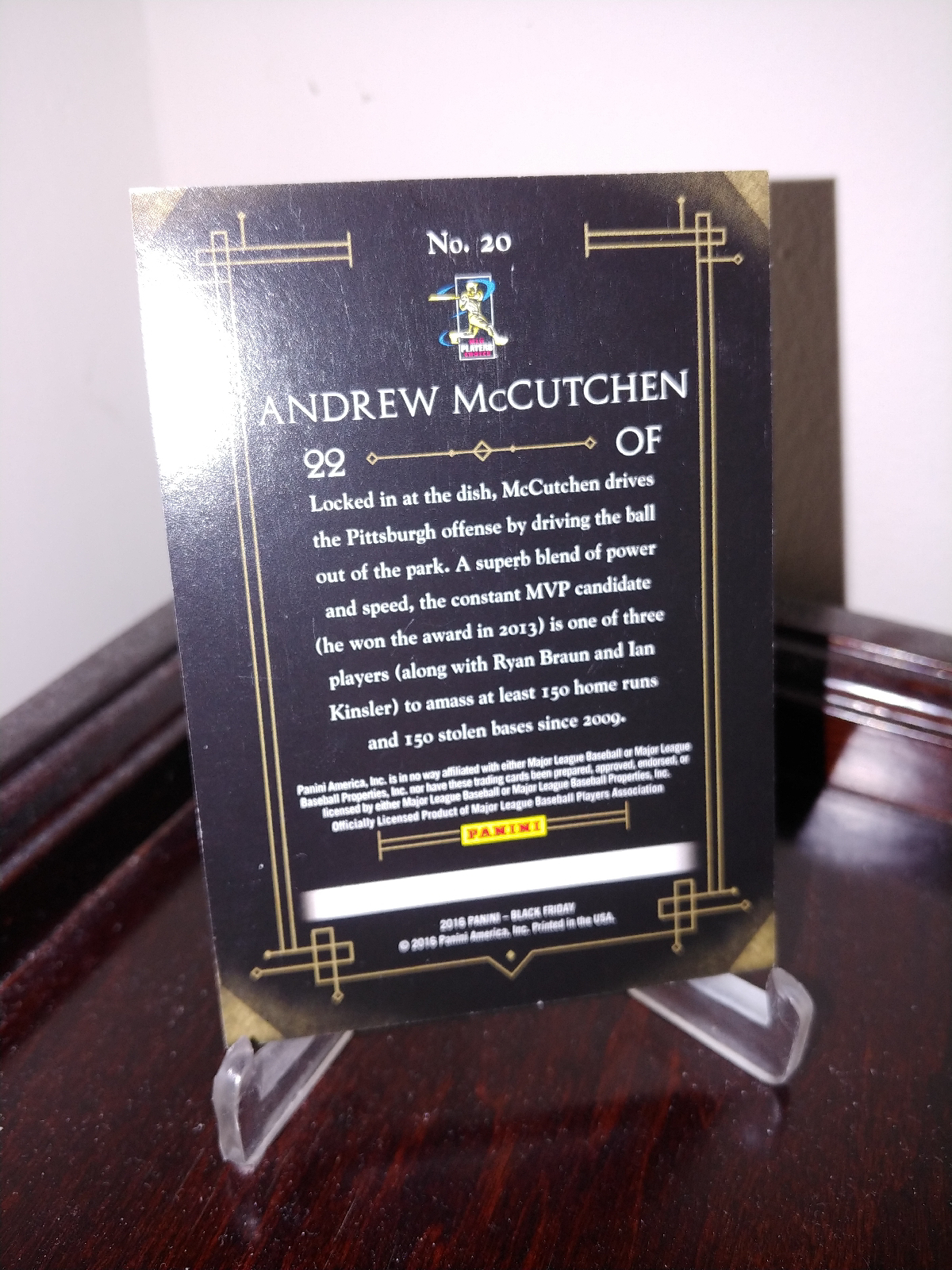 Have you notice a surge of pre Black Friday sales?
Posted by Collecting Cutch at 6:18 AM 3 comments: I am thankful that very very soon I will have a place to properly display my Cutch Cave. 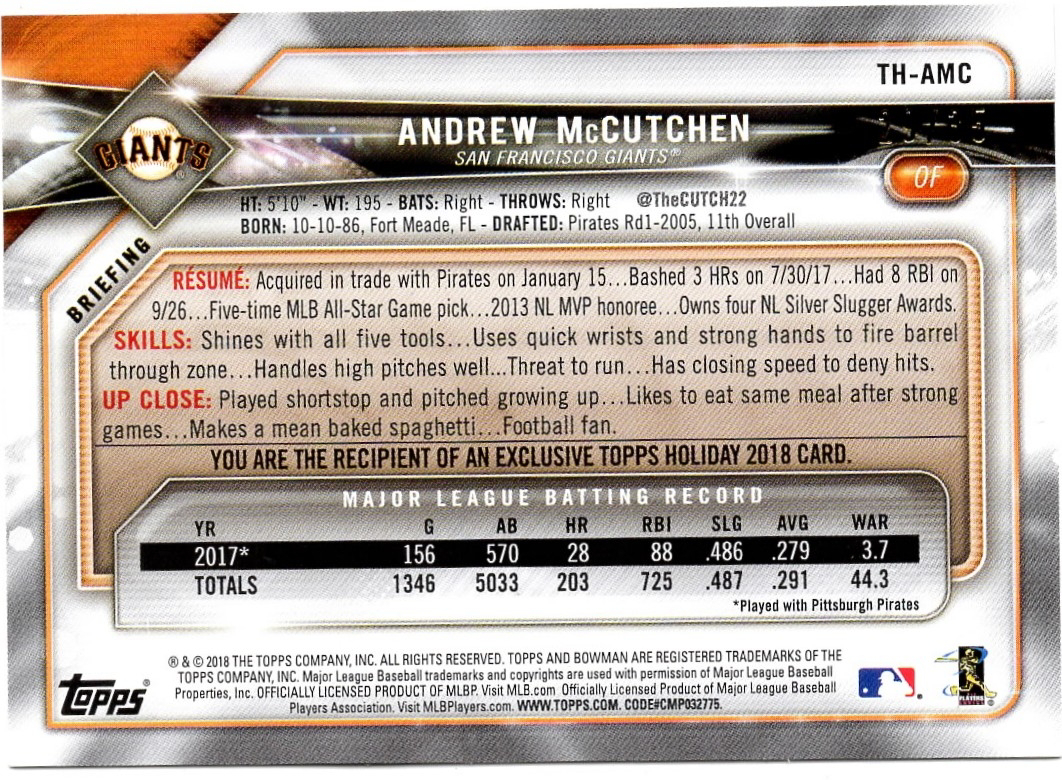 I am thankful that my commute to work each day will save me 2 hours daily once I move. 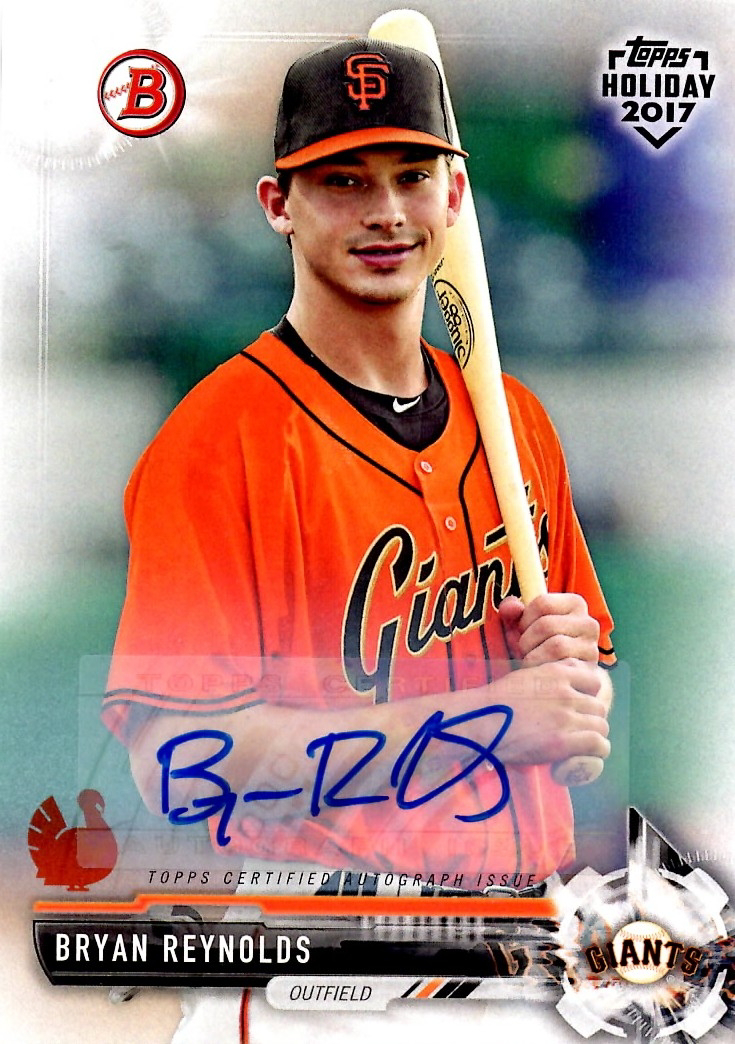 I am thankful for Topps releasing autograph cards with turkeys on them because turkeys are awesome. 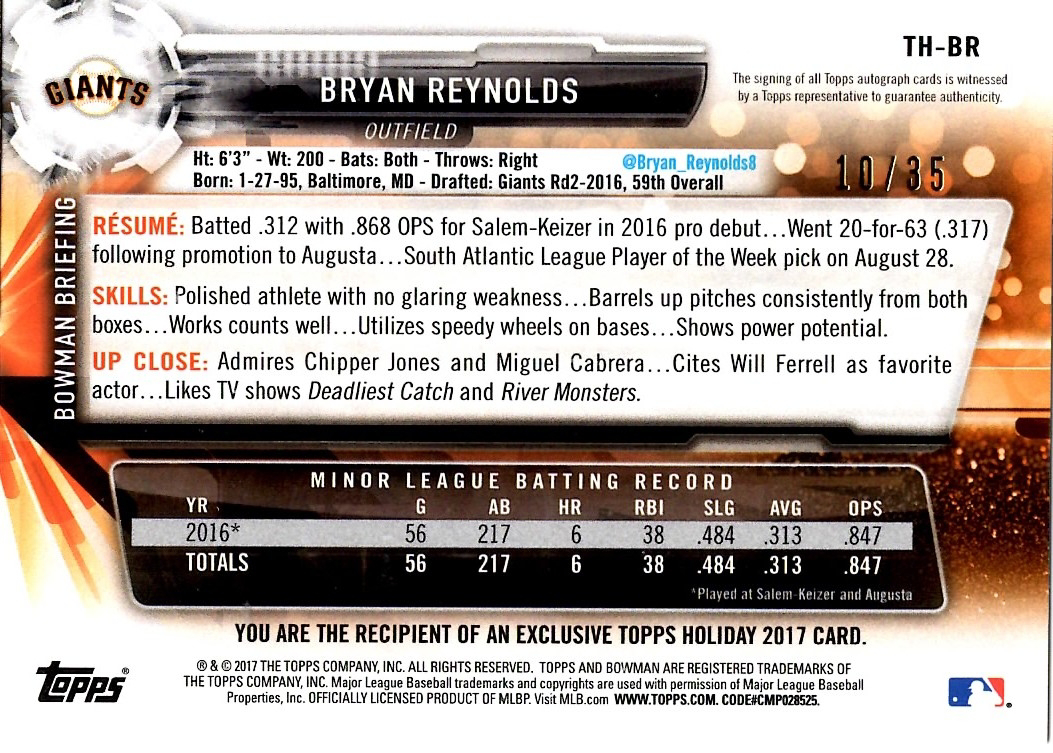 I am thankful for all the food I am going to consume today.
I am thankful for Ghostbusters: Afterlife finally being released which I will be watching tomorrow.
What are some unique things you are thankful for?
Posted by Collecting Cutch at 7:50 AM 4 comments:

Yesterday I promised I would show off one of my recent 1/1s I have acquired over the past few months.
Well here it is, my first Logoman of Cutch in a pinstripe Phillies uniform. 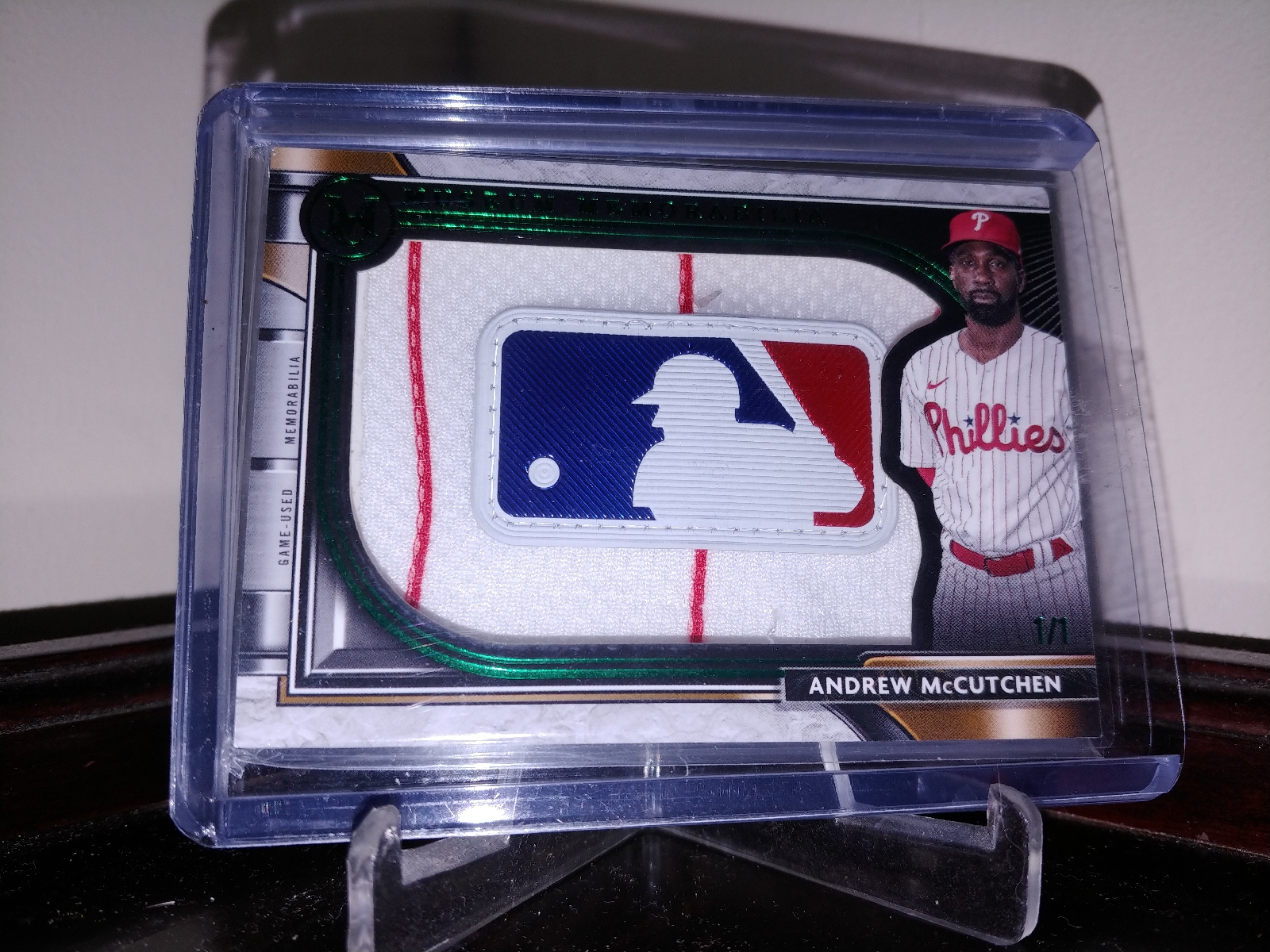 Pretty stoked to add this to the collection as it looks much different than all my other Logoman cards.
Wow 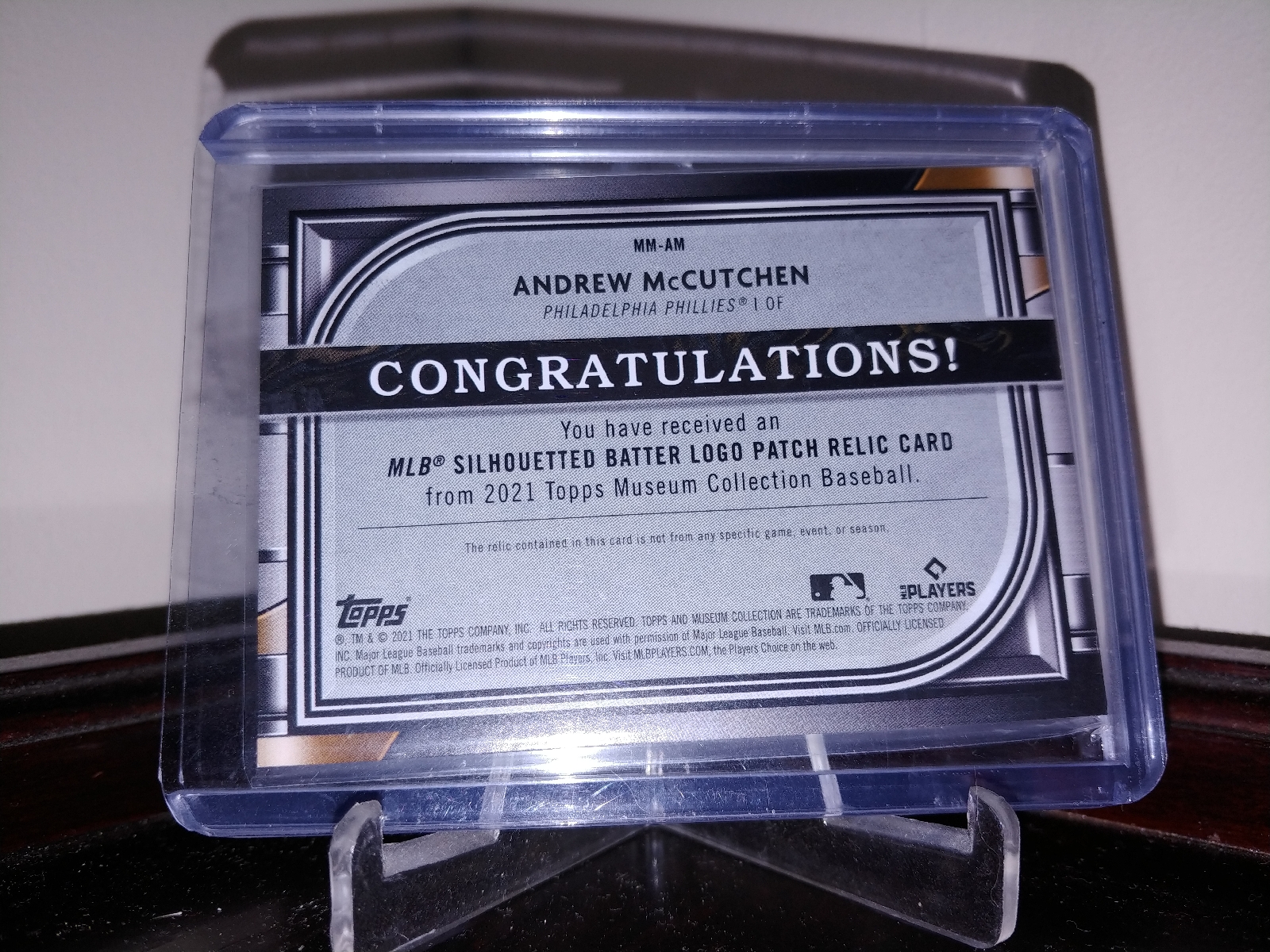 The back is typical for what you'd see from a 2021 Topps Museum card.
If MLB was to update the MLB Logoman with a silhouette of a baseball player who should it be?
Posted by Collecting Cutch at 1:00 PM 3 comments:

I hate to say this, but my favorite athlete of all time is getting close to that retirement age.  Far too often we see players retire in their mid 30s.  Very few play until they're in their late 30s or early 40s.  Those that do are often legends and no doubt Hall of Famers.
Again I hate to say this, but I'm not sure there is enough on Cutch's resume to declare a no doubt Hall of Fame nod.
For every Lloyd Waner or Ralph Kiner in the Hall of Fame there are guys like Luis Gonzalez, Steve Garvey, Dale Murphy, Kenny Lofton, and Bernie Williams that never really came close to the Hall of Fame, but had really good career counting stats.
While Cutch certainly has had key moments in his career he never had that one career defining moment, that clutch postseason at bat or that spotlight on him.  Sure he's had the spotlight on him in his early part of his Pittsburgh career, but taking a franchise with 2 decades of losing records into the postseason three years in a row was basically just noticed by the fans of Pittsburgh.  I'm not sure the rest of the nation got a chance to see how special Andrew was to the franchise.
He was one of the best hitters of the past decade, but largely goes undervalued and under appreciated by the casual fans.
Not to me though (obviously).
Cutch was and is my favorite athlete ever.  I got back into baseball in 2005 when I attended a Pirates baseball game in Philadelphia.  It was the first time since the 1994 strike shortened season that I attended a baseball game.
I fell back in love with the game and decided that I would start up a baseball card collection again and researched the Pirates future.  They had just drafted a teenager named Andrew McCutchen and I knew if he ever made it to the majors I would start collecting all of his cards.  I had no idea how difficult that task would become in the parallel era of collecting we are currently experiencing in the hobby.  I also had no idea how much the hobby had changed since 1994 when I gave up on collecting baseball cards.  There were so many rare low numbered cards that I never knew existed.
I've been told that my player collection has helped inspire others to collect more heavily their favorite players and I'm honored that I have been able to do that.
Someone that inspires others can sometimes be called a luminary. 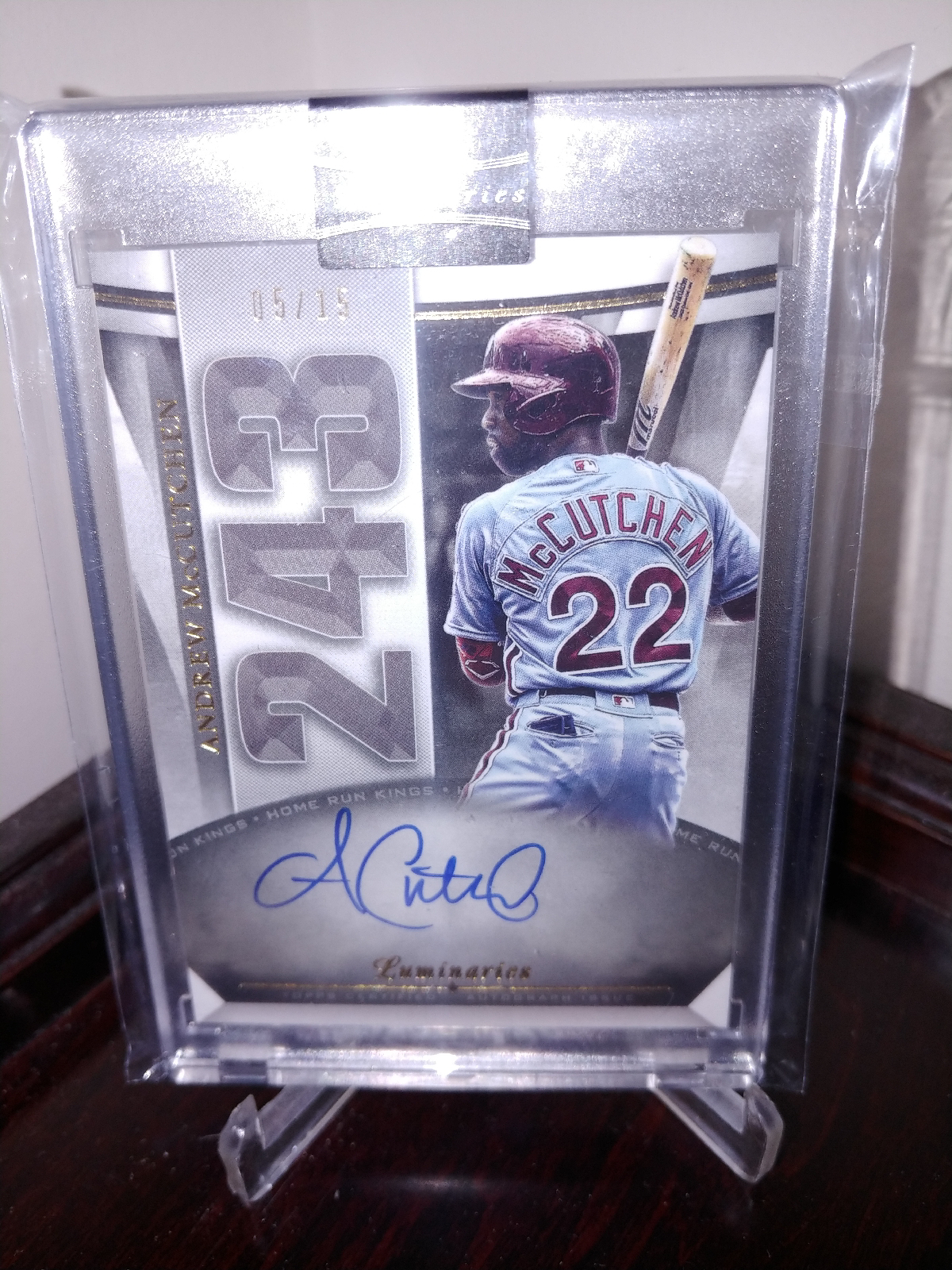 Andrew McCutchen helps inspire me.
Look closer at this 2021 Topps Luminaries autograph and you'll see why I am being inspired on a daily basis from my favorite baseball player.
When it comes to my collection I have tried to keep pace with Cutch by having an equal amount of 1/1s to the number of Home Runs hit by Cutch.  They can be printing plates, Superfractors, color parallels (red for Big League Baseball, gold for Topps Now, etc), Logoman patches, sketch cards, etc etc etc...
This Luminaries card has a bold 243 on the front signifying that Cutch has hit 243 homeruns entering the 2021 season. 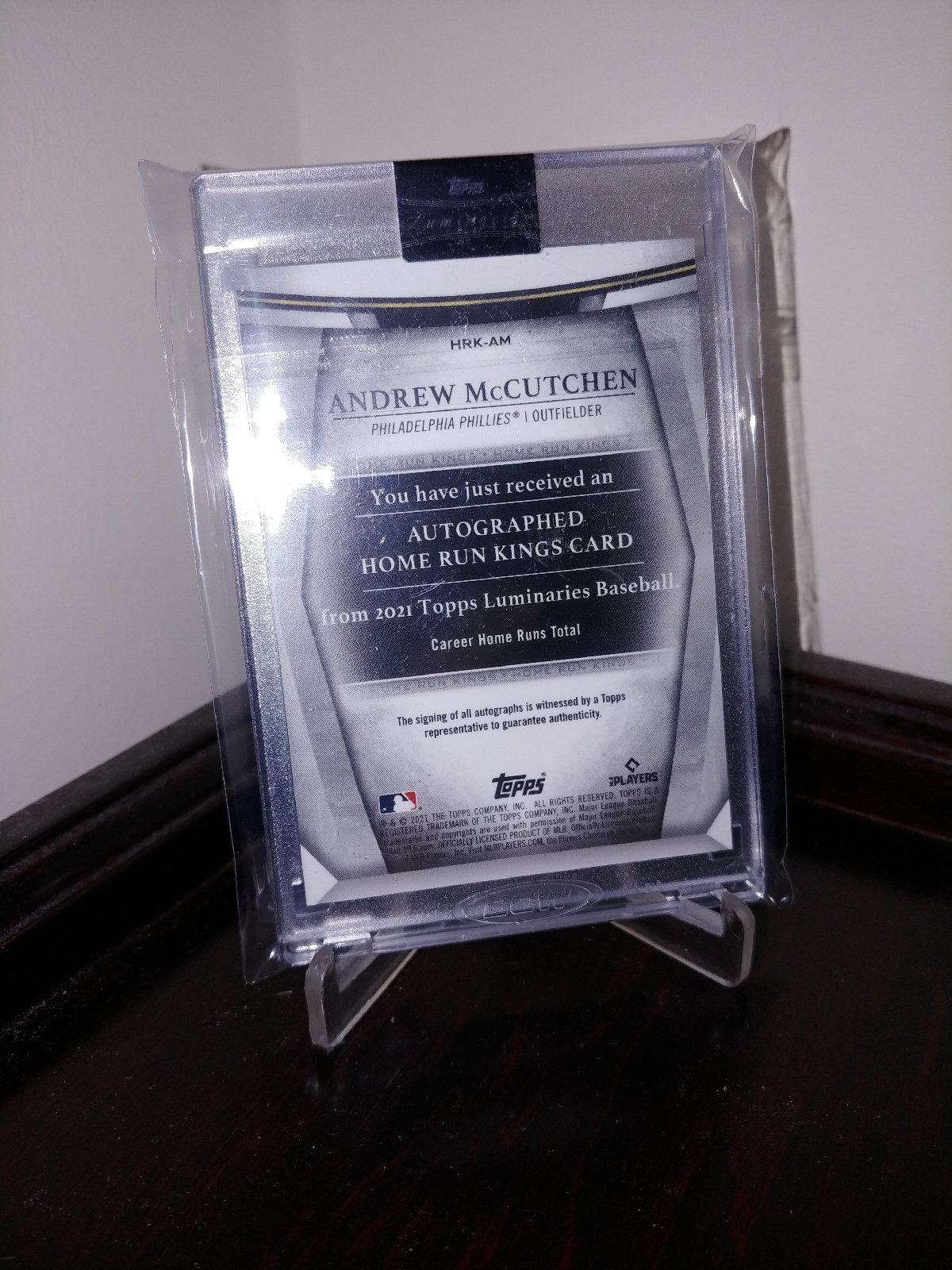 While this card isn't a 1/1 it does remind me of all the work I need to do to keep pace with Cutch.
Cutch had hit another 27 round trippers over the course of the 2021 season bringing his 270.
Looks like I've got some serious work to do during the off season as I will need to add 18 more 1/1 cards to the PC prior to Cutch's 2022 debut as I am at 252 one of ones in the collection.
I'll show off one of my more recent 1/1 pickups tomorrow.
Do you keep track of your player collections compared to any of that player's numbers?
Some examples could be
Having an Ozzie Smith autograph collection equal to his Jersey number (1)
Having 355 Greg Maddux base cards equal to his career Win Total
Having 73 Barry Bonds insert cards (equal to the historic 2001 season
Having 1,271 Tino Martinez cards equal to his career RBI total
Posted by Collecting Cutch at 6:27 AM 7 comments:

Bryce Harper won the NL MVP for the second time in his career. 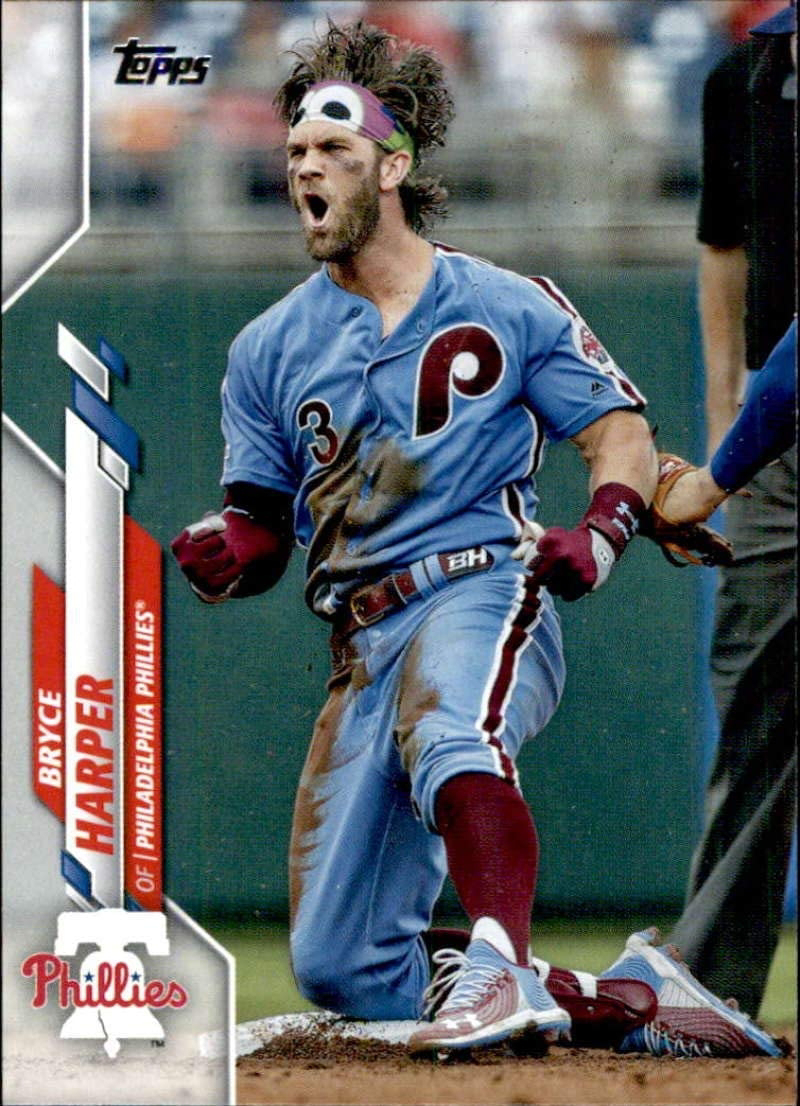 I like Bryce Harper.
A lot!
I love the way he plays the game 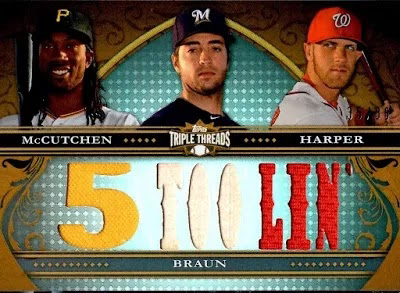 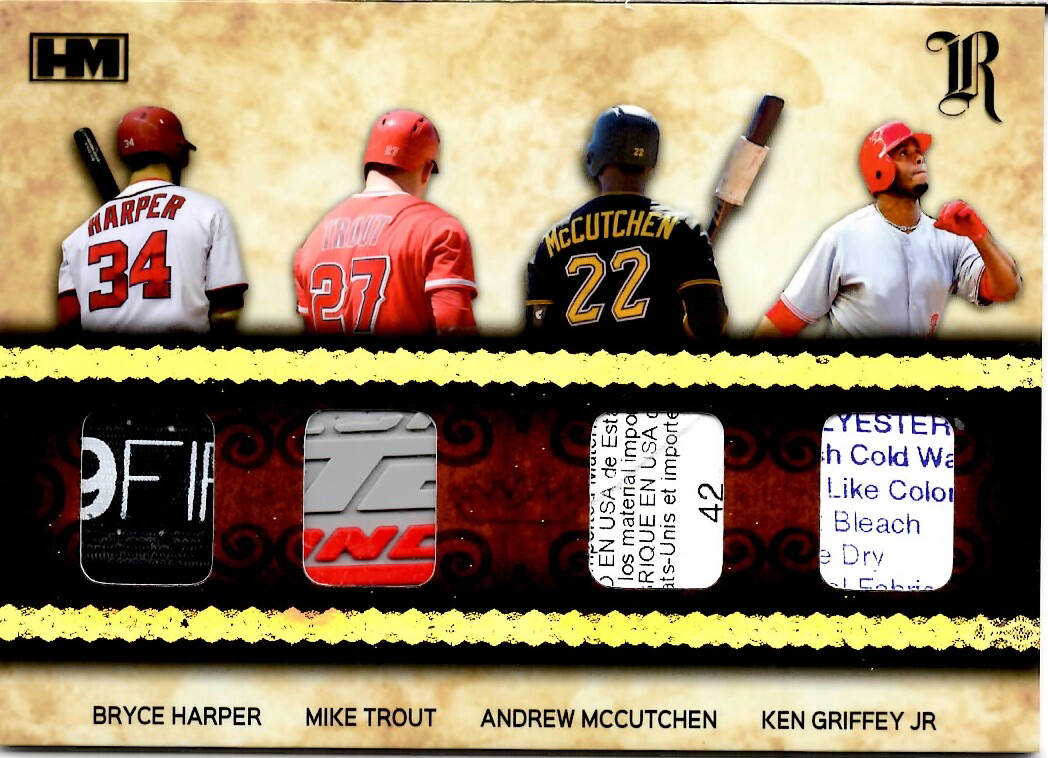 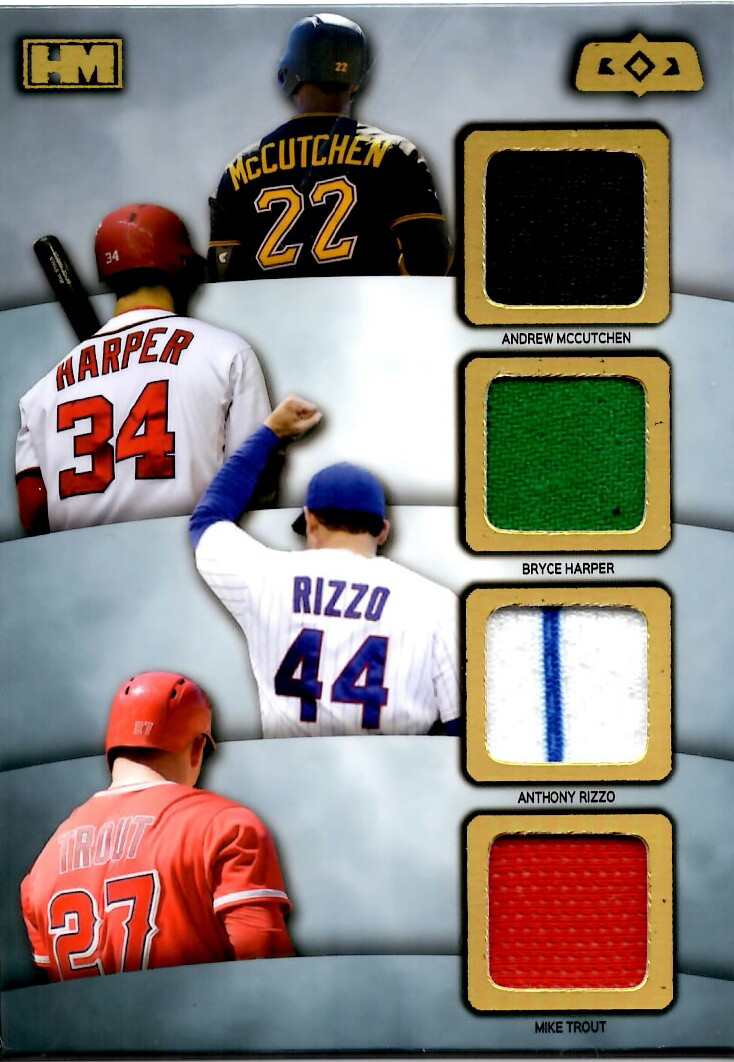 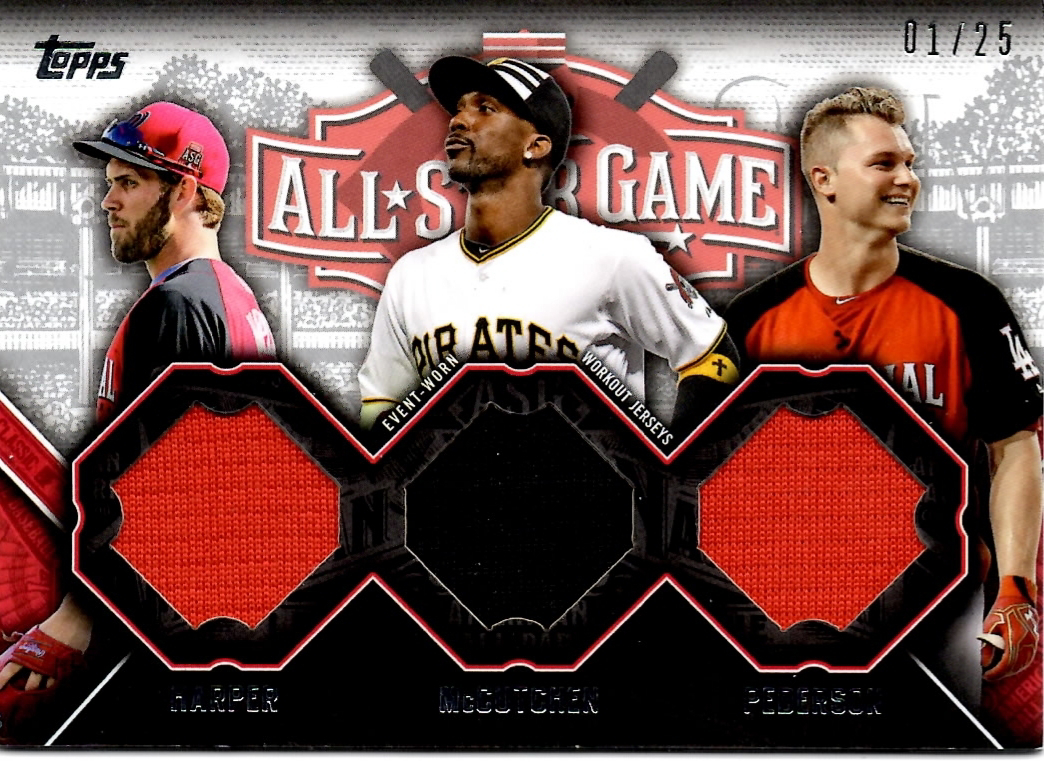 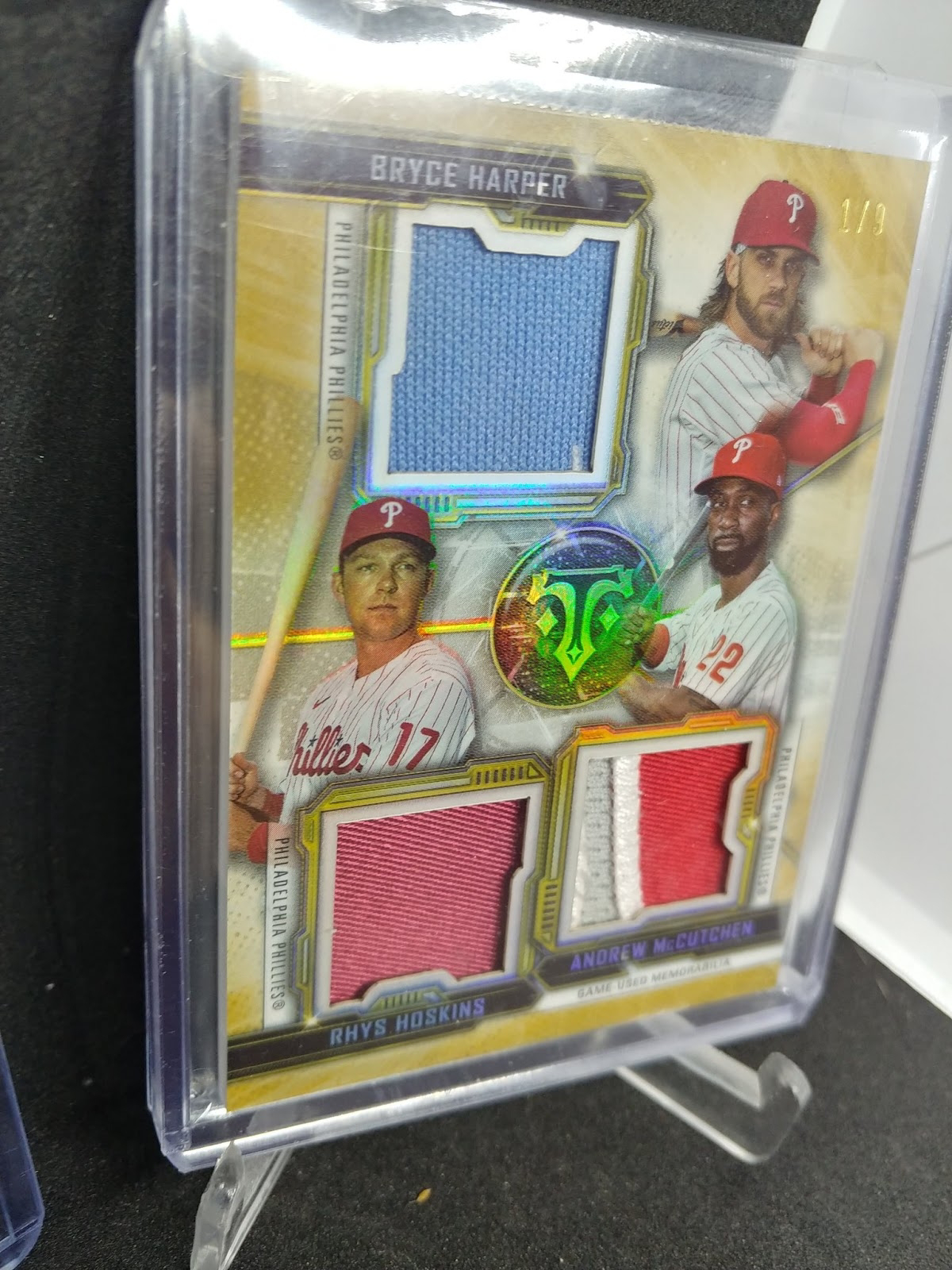 Above are all my Cutch cards that also feature Bryce Harper.
Posted by Collecting Cutch at 8:35 AM 4 comments:

Another Runner Up Performance

Always the bridesmaid, never the bride.
Isn't that the saying?
I'm not sure if that could be related to Cy Young Awards, but Gerrit Cole has to start feeling like that at this point in his career.
Despite leading the American League in Wins in 2021, it was announced Wednesday night that Gerrit finished second in the Cy Young voting.
I believe that the "sticky stuff" conversations hurt Gerrit's chances of capturing his first Cy Young award.
Since 2015 Gerrit has finished in 5th place (2018), 4th place (2015 and 2020) and 2nd place (2019 and 2021). 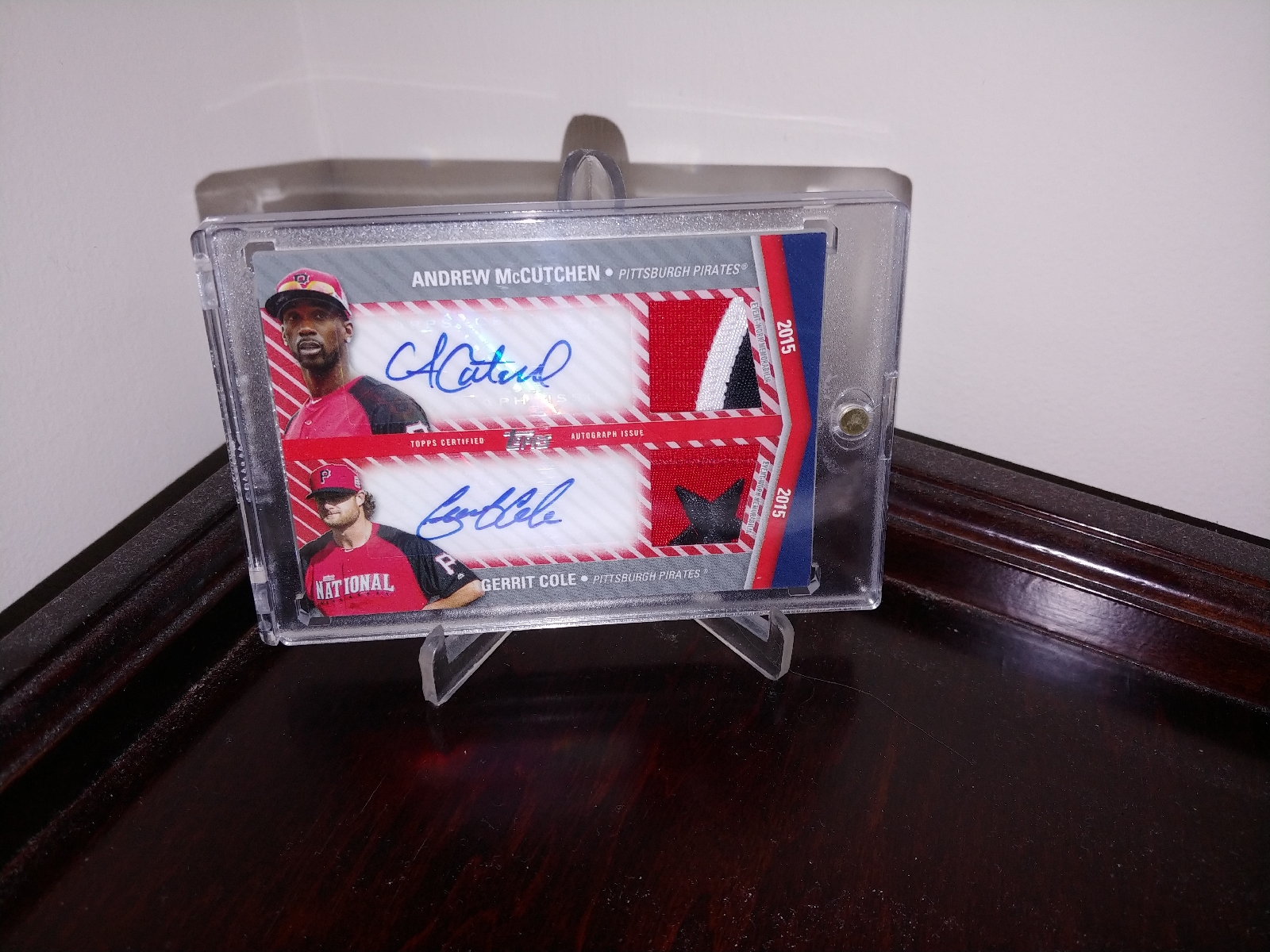 The 2015 Pittsburgh Pirates were one of my favorite teams to watch and sadly failed to win a single postseason game (eliminated in the Wild Card game).  They had a starting rotation of Gerrit Cole, Charlie Morton, AJ Burnett, and a resurgent Francisco Liriano.  They also had top pitching prospects like Tyler Glasnow, Jameson Taillon, Clay Holmes, and Nick Kingham in the minors.  That pitching staff could have become legendary if they reached their ceiling of talent and stayed healthy together.
I really missed that 98 win team and the way the management tore down the position player core within a year and the entire starting rotation in 2015 was gone within 3 years.
One of the most famous pitchers to have an incredible career, but never win a Cy Young award is Nolan Ryan.
Through their Age 30 seasons here is a comparison of Cole vs Ryan
Cole
117 Wins
3.20 ERA
1,449 Innings Pitched
1,673 Strikeouts (10.39K/9)
1.12 WHIP
5 top 5 Cy Young Finishes
4 All Star Games
Ryan
141 Wins
3.06 ERA
2,234 Innings Pitched
2,426 Strikeouts (9.77 K/9)
1.31 WHIP
3 top 5 Cy Young Finishes
4 All Star Games
The all time strikeout king had only SIX top 5 finishes for the Cy Young Award.  His career 4.7BB/9 may be a reason why.  He was always giving up free passes. For comparison sake yet again, Gerrit Cole's BB/9 is only 2.3BB/9 (twice as good as Nolan Ryan).
Do you think Gerrit will eventually win a Cy Young Award in his career?
Do you think Gerrit Cole's career will be tarnished by the spider tack allegations that occurred this past season?
Posted by Collecting Cutch at 7:15 AM 5 comments:

I have been so extremely busy preparing for our closing date of moving into our new house.
It has been an absolute roller coaster of emotions.  From the fun moments of looking at houses to putting in offers and the anticipating of knowing if the offer would be accepted to all other things this process has been extremely stressful and taxing mentally and physically.  Hopefully we will have everything finalized early in December and I can show off the new Cutch Cave early next year.
About 2 months ago I showed off a box of relics that I never logged or showed off.  I haven't had much time to go through all my boxes still as I prepare for the move, but did come across this nice card from 2015 Topps Museum. 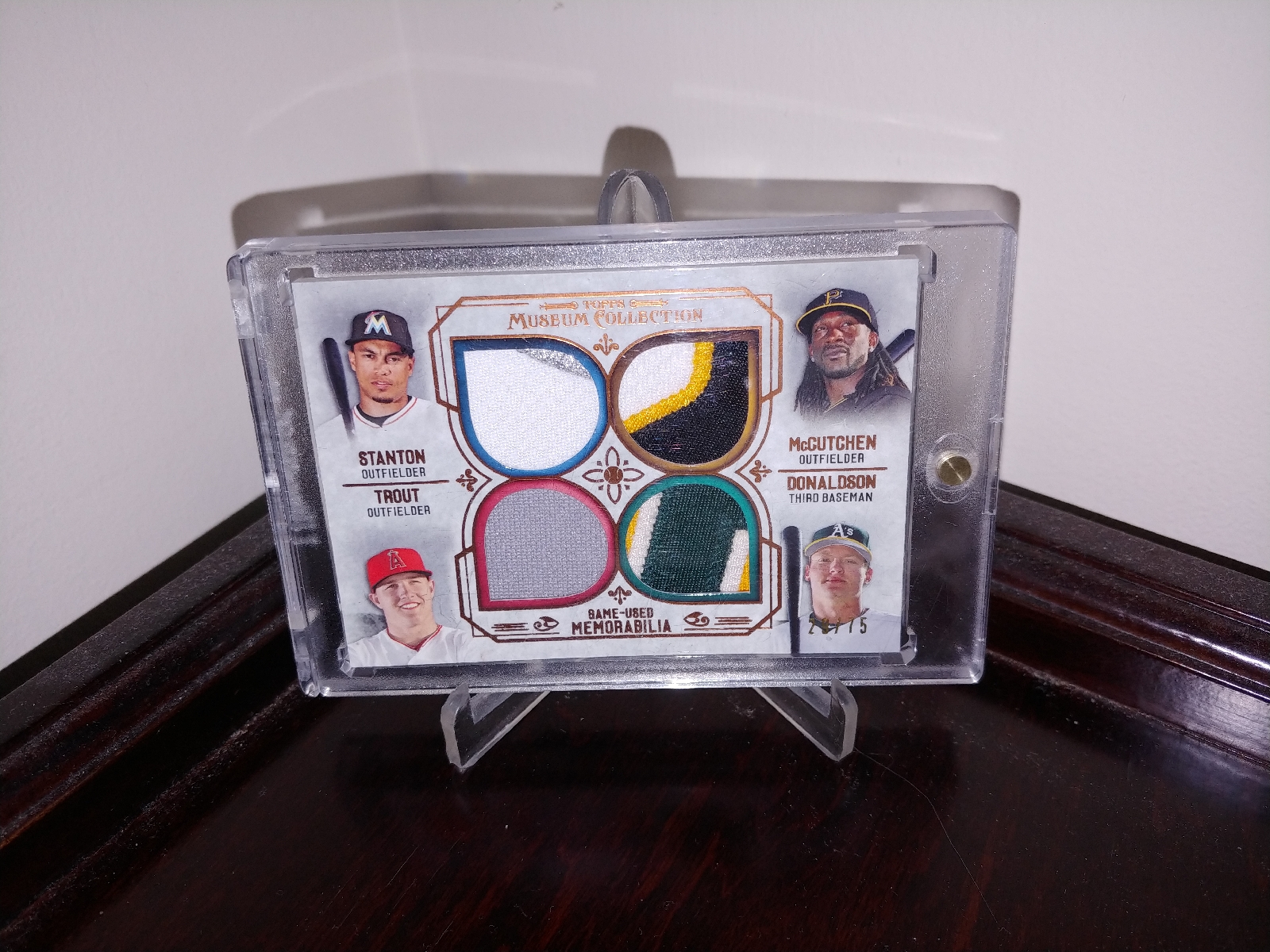 What a beauty of a card!
The Cutch and Josh Donaldson patches are really nice!  I love the tiny sliver of silver from the Stanton patch too.
It's unfortunate that the Trout relic is just a boring grey jersey relic.
Fun fact, this card has 1,178 career Home Runs between the 4 players featured on it.
Giancarlo Stanton leads the pack with 347 career homers.  He hit 35 last year leading the four featured players in 2021.  He won the NL MVP in 2017 and finished second in 2014.
Mike Trout has the second most career round trippers, but hit only 8 last year due to injuries.  He has 9 seasons of top 5 MVP votes.  He has played only 9 full seasons in the majors, winning the award three times.  He is this generation's greatest ball player.
Cutch has 270 career homers and hit the second most in the 2021 season among the four with 27. He has finished in the top 5 MVP votes in 4 consecutive seasons (2012-2015), winning it in 2013.
Josh Donaldson has 251 home runs and hit 26 in 2021.  He was the AL MVP for the 2015 season and has finished in the top 5 three times.
Overall these are extremely impressive numbers for the four players featured on the card.
How many of these guys do you think will be immortalized in the Hall of Fame one day?
Posted by Collecting Cutch at 6:59 AM 2 comments: