I missed an opportunity to add some of the other color parallels of this rainbow to my collection recently, but have had the "base" version numbered to 15 copies for many months sitting around. 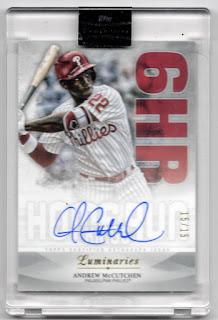 2019 Luminaries features on card autographs (for the most part) inside 1 touch mag cases and sealed with a security sticker on top.

The set focuses on Hit Kings, Home Run Kings, and Masters of the Mound.  While not known as a Home Run hitter, Cutch got the HR treatment for his entry into the set.

On the front of the card you will notice that it says 6HR.  Surely Cutch has more than 6HR in his career.  But, if you flip the card over... 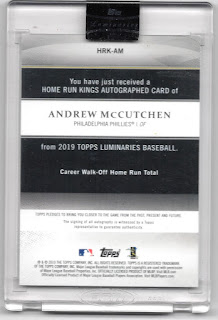 you will notice it talks about Cutch's walkoff homers.

Among active players, Cutch has the third most walkoff homers trailing only Albert Pujols (12) and Ryan Zimmerman (11).

Cutch hit 5 walk off homers with the Pirates tying him for second place on the franchise all time records.  He also hit one as a member of the San Francisco Giants.

It happened 2 years ago when Cutch hit his 6th All Time Walkoff Homerun April 7th, 2018.

Back to back days of This Day In Cutchstory?

As I predict I will do every April 7th due to Cutch's epic day at the plate of Game 7 of the 2018 season, I will show off a card that discusses his 6 hit performance that was capped off with a walk off homerun in the 14th inning.

Here are some fascinating facts about that epic at bat:

This was Cutch's 1st SIX hit game of his career and the first time he collected FIVE hits in a game since 2010.


Cutch was the first player since 1969 to collect six hits and a walk off homerun in the same game.  Jim Northrup and Cutch are the only players from 1900 to do such feats.

Andrew McCutchen became the first player to hit a walk off homer in the 14th inning or later with his team losing since July 11, 2015.  The player that did that?

It was the 3rd time in 4 games of only a 7 game season that the Giants had beaten the Dodgers decided because of a homerun.


Do you remember Cutch's walkoff for the Giants?
Posted by Collecting Cutch at 7:16 AM

Email ThisBlogThis!Share to TwitterShare to FacebookShare to Pinterest
Labels: 2019, April 7, luminaries, This day in Cutchstory, walkoff