A Call To Arms: Who Will Pilot The Blue Lion?

9/11.  There really isn't much that I can say about what this day meant to our country.  We probably all remember where we were when the planes hit the towers that morning.  I was in a college class with my good friend Bob.  We both only had that class that day and were planning on going to TCNJ that night to meet up with my (ex) girlfriend's sister, Jenny.  We were dismissed from class early and after many failed attempts using Bob's cell phone we finally got in touch with Jenny.  We decided not to go to her campus as fear struck her paralyzed.  Jenny had been to NYC just a few weeks prior and couldn't believe the towers were hit in a terrorist attack.

Bob and I decided we would just go to the mall and grab some pizza while we figured out what else we would do that day.  We grabbed pizza then went to the comic book store.  We tried to ignore what was going on in real life and were trying to just be two 19 year olds enjoying a normal day, the best way we could.  After the comic shop, we went to an antique shop.  I saw a 6 inch die cast metal vintage Voltron figure from the 80s.

I had remembered Voltron as a kid, but didn't have the Lion Force Voltron.  I had the "car" Voltron also known as Dairugger.  I bought the Lion Voltron for $20 and promptly displayed it in my car in the back window.

We ended up just walking around the mall and Main Street for the rest of the afternoon then parted ways.

My memories of the day are filled with pizza, comics, friendship, and Voltron.

In the following days, weeks, and years that followed I would see the terror of that day and how many people it impacted.  I am grateful that no one I personally knew at the time was there that day.  I am saddened by those that were.

Tonight I am going to the Phillies and Braves game with a trio of coworkers.  Two of them are too young to remember the tragedy of 9/11 (they're in their early 20s).  One of them is slightly older than me.

I always try to focus on watching baseball today.  Maybe it is a subtle way for me to avoid the situation, but the one constant in my life that has made me happy has been baseball. It reminds me of my youth and allows me to dismiss any real life problems.

I haven't been adding a lot of new cards of Cutch in a Pirates uniform to my collection lately. This is largely due to the fact that there isn't a lot out there that I don't already have. This has been a blessing in that it allows me to enjoy my cards I already have more.

I was thinking of a post I could come up to discuss my 9/11 memories today and found a card that reminds me of the day.

We all know that Topps tends to reuse their images.  I decided to take a look at this 2017 Topps 5 Tool insert and see if I can assemble the card using images from other Topps cards. 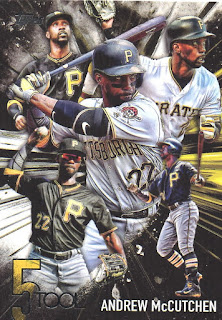 So with the Dynotherms Connected, Let's Form This Card, Voltron Style.  For each card I will post there are multiple parallels to chase. 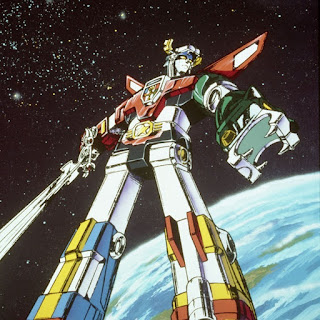 Starting with the image in the top left corner, we will work clock wise to find what other cards these images were used on. 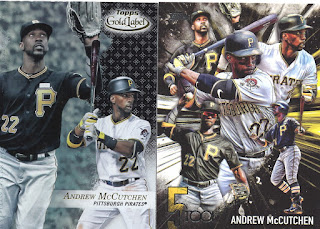 The image of Cutch catching the fly ball is from 2017 Topps Gold Label Class 1.  Cutch is a decorated defender, having one the 2012 Gold Glove and finished as a top 3 finalist in 2013.  With 2,954 career putouts he ranks third among all active Centerfielders in putouts.  He had 5 seasons as a top 3 centerfielder in putouts.  Even with missing the final month of 2018 because of a trade, he ranked 2nd in putouts as a rightfielder last season. 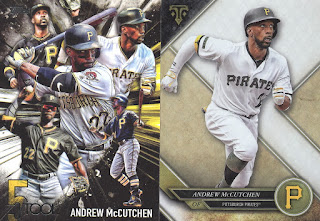 In the top upper right is an image of Cutch running.  This can be seen on his 2017 Triple Threads card.  Even though Cutch has slowed down a bit over the years and is more selective about his stolen base attempts, Cutch still has 187 career stolen bases, which is 18th among all active players. 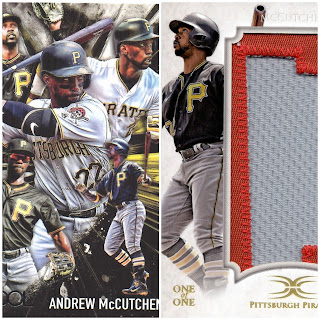 Moving to the bottom right corner we see an image of Cutch presumably looking at a homerun shot.  Not many people can claim to have an image of that on a card as this image was used for 1/1 letters in their 2017 high end Definitive release.  I am the one person that can claim to have one. Cutch has 233 career homeruns.  Prior to this season only Giancarlo Stanton and Nelson Cruz could claim hitting 20 or more homers from 2011 to this year.  Unfortunately with the injuries that have plagued both Cutch and Stanton, only Nelson Cruz could claim that now. 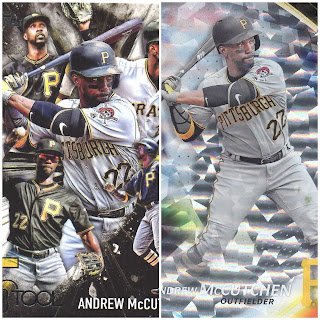 The image in the center is a little tricky.  It is clearly from the same game based on the eye black and road jersey, but the Bowman Platinum version looks like Cutch is a little more into his swing than the image used for the 5 tool card.  Cutch lead the league in hits in 2012 with 194.  His 1,664 career hits ranks him 23rd among active players.  For three straight years he was among the top 10. 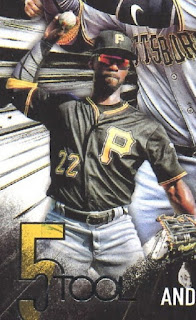 That moves us to the bottom left corner.  I can't find a card using the same image as this card.  Cutch has always been thought of to have a less than average arm in the outfield, but with 63 career assists as a centerfielder, that puts him 3rd among active players.  In 2011 and 2013 Cutch lead the league in double plays turned by a centerfielder with 5 and 3 respectively.  With missing a month thanks to a trade last year from the NL to AL he still ranked third among all right fielders with 8 outfield assists.


I guess it is fitting that the tool that Cutch is most associated with not having is the image that hasn't shown up on many cards.
Posted by Collecting Cutch at 9:04 AM