Yesterday's post was very dark and pessimistic.  In all my years of being a Pirates fan in the Huntington era I always wanted to trust the process and believe in Neal.

I am still not sure what will happen come the last day of July, but announcer Joe Block reminded us fans yesterday that as recent as 2014, the Pirates had a sub .500 record of 7 games on this same date that year.  They would go on to have the 4th best record in the senior circuit and gain home field advantage for the Wild Card game.  Unfortunately, that was the year of Bumgarner's post season heroics and he would throw a complete game shutout.

I watched the Pirates game last night and came away with these three things.
1)Gerrit Cole is a freak and very under rated pitcher.  He could bring back a massive haul if traded.
2)Adam Frazier is a great leadoff hitter for this club and should find some way to be in the lineup every day.
3)Cutch looked like classic Cutch out there as he batted 2 for 4 with 2 RBI and 2 stolen bases.  His 2 outs were hard hits at 'em balls to third base and centerfield.  The hot shot to third looked like it could have been a double play off the bat, but Cutch was hustling down the line like he used to so he wouldn't get doubled up.  The last time Cutch stole 2 bags in the same game...2014.

Cutch has always been a slow starter each year.
Once the weather warms up though, WATCH OUT!

Could last night's game have triggered a hot streak for the Pirates?

Will Cutch return to MVP form now that the weather is warming up? 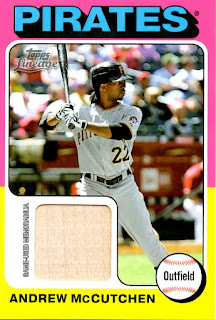 Today I wanted to show off an older bat relic in my collection while making a reference to the 66 Batman.  I don't have many bat relics of Cutch, certainly none that tie into a 1966 Batman theme.  The 1975 mini from 2011 Lineage was the closest I could get.

Topps hasn't produced many bat relics over the years, but Panini certainly has.  Cutch has had bat relics in National Treasures, Diamond Kings, and Donruss releases in the past two years.

I am starting to branch out my super collection of Cutch to include HomeRun tickets.
Here's one from 6 years ago today.
It was Cutch's career HR #36.  It also happens to be a Charlie Morton complete game victory.

Currently these are the tickets I have of significant Cutch moments.

If anyone comes across McCutchen HR ticket stubs and wants to trade them to me, I am open to offers.

Posted by Collecting Cutch at 8:54 AM