I want to say Happy Father's Day to all the dads out there.

I know that the greatest influence on my life is my own father.

He was there for me while growing up.

I still go and visit him once a week and enjoy catching up with him about whatever life is throwing his way.

As someone who is self employed I am continuously impressed with the hard work and ethics he has and how he instilled them i to me.

One of my favorite moments of my childhood was when I was 12 years old in little league. Unlike now where there are pitch limits, all my league had was 6 innings limit for a 7 day period.  My dad was the head coach and I was one of our team's all stars.  I however wasn't our best pitcher.  I was the second best pitcher on the team.

Our star pitcher had been used for 1 inning against what equates to this year's MLB version of the Reds.  They were called the Yankees and the team stunk.  Sean, the stud pitcher, had to be used though because of other inning limits for myself and our third best pitcher, Dave, the previous seven days.

I was cruising through 5 innings of no hit ball striking out 11.  I walked 4, but my Kent Tekulve sidearm pitching style was nasty that day.

My dad told me he was going to take me out since we had a 7-1 lead (few wild pitches caused a walk to turn into a run).

I remember looking at him with determinition saying "I want to finish this".

He then said "I'm probably going to need you for an inning against the Giants," the best team in the league.

While not as firm I remember getting upset knowing that I probably wouldn't win the battle, I looked and said "please Dad".

I went out for the sixth and final inning getting one more strikeout and getting the next two guys to hit groundballs to Sean at shortstop.

We won the game and I pitched a no hitter.
My arm is still fine.
I didn't need Tommy John surgery despite throwing over 100 pitches.

Rain engulfed NJ for the next week so we had to reschedule the game.

Sean was allowed to pitch all six innings against the Giants, which we also won by a score of 1-0.  I got the team's only hit off their ridiculously good pitcher "Woody". I stole second and third, then came home on a sac fly.

Those memories of my dad coaching the team, having my best friend on my team and his dad being so close with my dad are amazing memories that I will treasure for the rest of my life.

After the game we celebrated with icecream and a trip to Sports Authority.  There I got a pack of Donruss Studio 1993 and a Florida Marlins tshirt.  I remember pulling one of those throwback Will Clark cards and thinking how cool it was.

So again Thank You Dad!!!!
Thank you for inspiring me and believing in me!!!

I will start with an unofficial Father's Day card.
This 2011 Bowman and it's Chrome counterparts features an image of Cutch from Father's Day June 20, 2010.  The blue armband and headband combined with the Sunday alternative pinstripe uniforms give the game away.  Cutch would go and help lead the Pirates to a victory ending their 12 game losing streak. 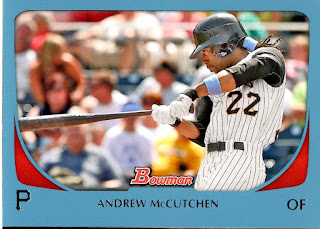 I have 6 of the paper parallels 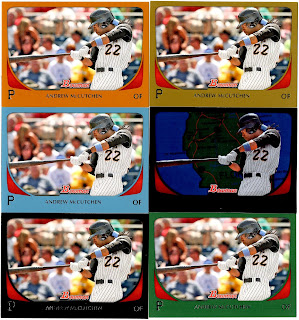 And 4 of the Chrome parallels 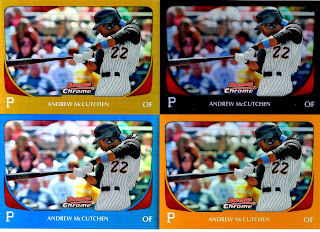 Moving on to 2013 we have the begining of a 4 year stretch that Cutch appeared in Panini's annual Father's Day release.
Meant to look like Donruss Studio 1993 is the 20 year retro look at that classic set.  I have both the lava flow and regular versions in addition to a Cracked Ice autograph version and two production proofs. 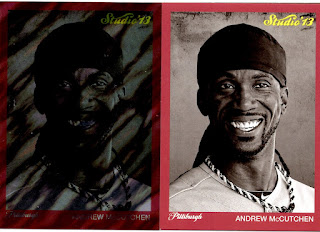 The back features the exact same concept as the 93 version... 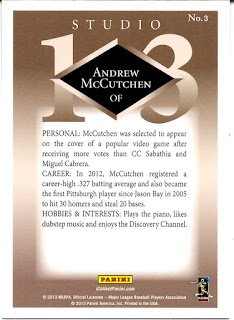 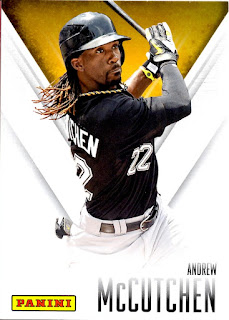 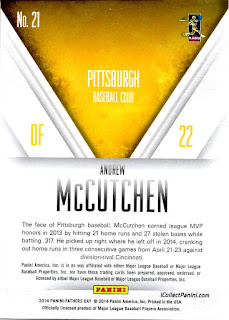 I need a bunch of parallels to this set, but am in no rush to get them.  At least begining in 2014 they designated this as an official set and made it a little easier to catalog.

and a reference to one of my favorite super heroes.  This card is awesome!!!  There may be an autographed version of this card as the checklist states some of the Elements photos have autograph parallels, but I can't find any additional information to confirm who got the autograph treatment. 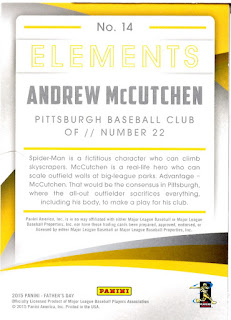 2016 would be the last year that Cutch appears in the Father's Day yearly release.  The design is nice and there are so many parallels that I still need for both the regular stock and thick stock versions.  I currently only have this thick stock base version /50. There are hyperplaid and cracked ice for both regular and thick stock if I remember correctly.  I need that base version too. 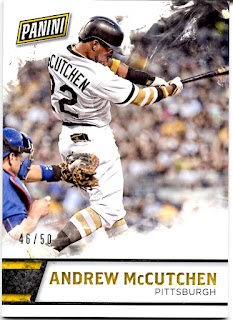 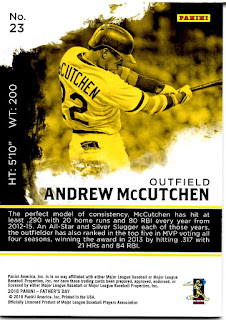 I love the design of this card. 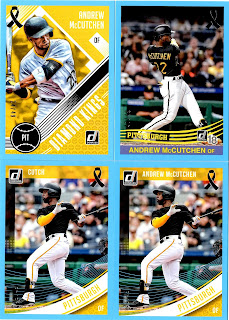 Begining in 2017, Topps started to call their powder blue parallels a Father's Day parallel and numbered them to 50 just like the Mother's Day parallels.  I currently have both the 2017 and 2018 cards, but need the Allegheny Armada with John Jaso from 2017. 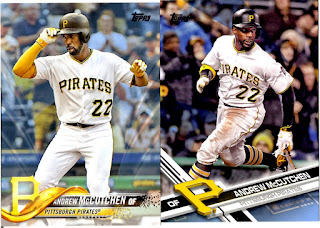 Posted by Collecting Cutch at 8:46 AM