So many hobbyists look at the "decline" of Andrew McCutchen and have basically written his career as being over.

With my recent extended stay on vacation I was browsing some sold items on eBay that I missed out on and am shocked at how cheap some of these cards had sold for.

Back in 2013 these cards would have pulled in roughly $30 to $50 each.  Now they can be had for under $5.  While I missed out on all of these auctions I did enjoy my time in Florida and have not been as obsessive about trying to acquire every McCutchen card on the planet especially since he no longer plays for my favorite team.

That being said, when I see that black and gold (yellow) appear on cardboard I really want to add it to the collection. 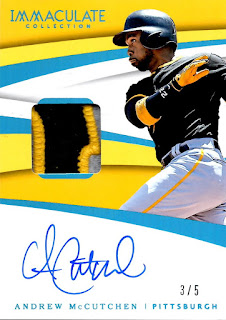 Such was the case with this Immaculate Patch On Card Auto numbered to 5 that I purchased before my vacation. 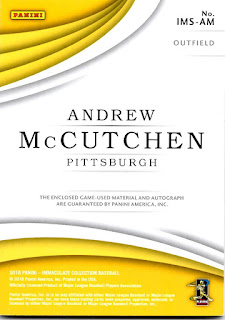 On Card Autographs of Cutch are tough to find as many of his early autos with Topps were sticker autographs.  I think that is why I have been so excited about the 2018 Archives Buyback Autographs as they are all 1/1s and are all On Card and are all Pirates uniforms.

My question to those in the hobby is why is collecting Cutch getting so much cheaper?  I understand he isn't a top 5 MVP candidate anymore and doesn't have his signature dreadlocks, but he is still a star in the game.

He is still having a better batting average than Rhys Hoskins, Bryce Harper, and Kyle Schwarber for the year.  Given the choice of having to put them in a corner outfield spot, I have more confidence in Cutch making the play than the other 3 although Harper is right there with Cutch in my opinion.

With so many players hitting homeruns these days, did you know that Cutch will soon be in pretty exclusive territory of having 8 straight seasons of 20+ HR?  The only other player to hit 20+ HR in the most recent 8 seasons are Giancarlo Stanton (9 straight seasons) and Jose Bautista (with 8 more HR he will have most recent 9 seasons so it is very unlikely he gets to 9).  Other stars either don't have the length yet or have had injury plagued seasons (Pujols).  Cutch only needs to hit 1 HR in next 14 games to achieve that feat.  Seven of those games are held in New York with the remaining seven split between Tampa and Boston.

So as the market for Cutch continues to shift to cards being cheaper, it's good to know that he is still one of the game's best despite being on "the decline".
Posted by Collecting Cutch at 6:58 AM