By now everyone who reads this blog should be aware that Andrew McCutchen is my favorite athlete of all time.  He could still be on the Hall of Fame track for his baseball accomplishments, but more importantly he is on his way to the Hall of Fame in life for everything he does off the field.

Cutch is an absolute class act.

He still contributes to the community and is still relevant in the Phillies clubhouse despite having undergone season ending surgery.

This is the first time I have gotten a chance to get his autograph in a formal setting since Pirates Fest 2010.  I have gotten his auto half a dozen times at games throughout the years though.

Even with as humble and kind that Cutch is to his fans, I can't lie I was a little nervous about asking him to sign a custom made baseball card with a piece of his hair in it.  If you say it aloud or even just quietly in your head, it sounds a little weird, right?

For those that follow me on Twitter you've already seen the end result and it is awesome. 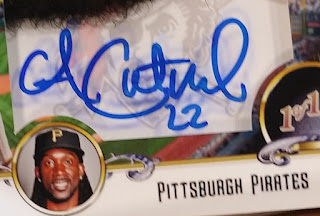 He made it a little easier when I showed it to him and he made comments in a jovial manner that it was hilarious.
Cutch obliged to sign the card and it came out awesome.  A nice bold signature with the 22 inscription added (without charge or even asking for it.) 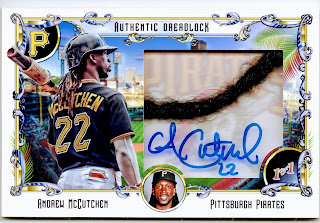 The back of the custom shows the MLB authentication 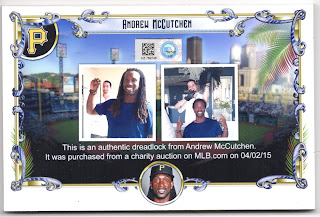 which you can verify on the MLB authentication site. 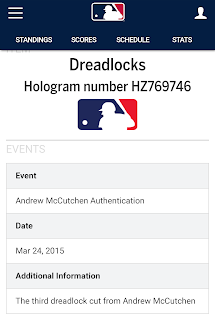 Here are my used ticket stubs from the autograph and photo opp tickets.  Unfortunately the photo studio ran out of paper (how does that happen?) and was unable to provide photos for those of us that paid for the photo.  We will have an online gallery built for us in the future.  Talk about disappointment. 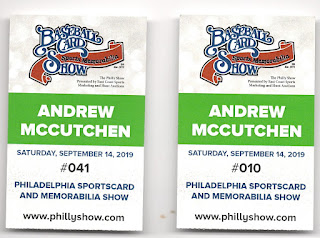 Cutch wasn't the only person I was excited to see at the show though.  I also got a chance to meet up with Brad from Brad's Phillies Blog and his wife, Val. (Shame on me for not getting a pic of us at the show)

I made plans with Brad via email to meet up and got a small package of Phillies extras I acquired in my pursuit of Collecting Cutch to give to him.  Much to my surprise Brad hooked me up with some Cutch cards too. 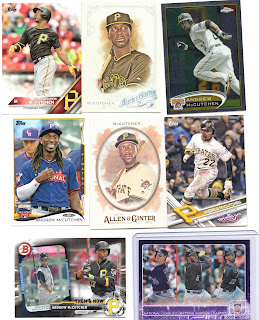 These are duplicates, but that purple TRU exclusive is in WAAAAAAAAY better shape than the one I have.  Mine had all kinds of chipping on the corners.  Thank you so much for the cards Brad.

In my travels to kill time while waiting for Cutch's photo opp and autograph sessions I browsed the floor looking for some new cards to add.

I picked up some trade/giveaway cards from the modern bins, but also grabbed some cards for myself. 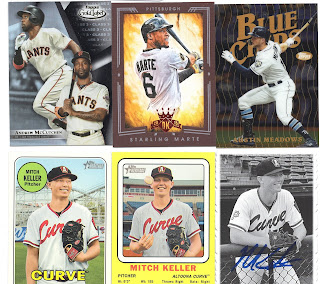 These were all acquired from the 10 cent bins.  The 2018 Gold Label Class 3 Black Parallel was a nice surprise of a Cutch card I didn't expect to find in a dime box.  The trio of Mitch Keller Minors Heritage was exciting too.  I still think Keller can become a top of the Pirates rotation guy.  Seeing Meadows in a Rays uniform is heart breaking. 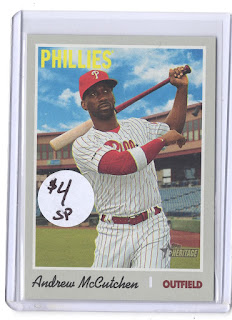 I have the action variant and a few of the chrome parallels of Cutch from 2019 Heritage High Number, but I didn't have the SP Base.  Now I do. 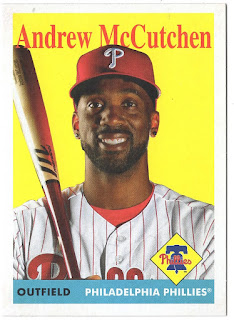 This pickup was awesome...and it was free.  The dealer watched me tirelessly look through his stack of 2019 Archives (which weren't in any kind of order by the way).  After about 8 minutes I found it and held it up with a $1.00.  It was in a .25 bin.
He said "who were you looking for that whole time?"
I said "McCutchen".
"Just take it" he said.
"Awesome. Thank you very much" I replied.

I wasn't done yet though.  I found a pair of dealers who were selling those 5x7 Topps Online exclusives.  I managed to grab 10 of those that were Andrew McCutchen and 1 Stadium Signatures variant of Gregory Polanco. 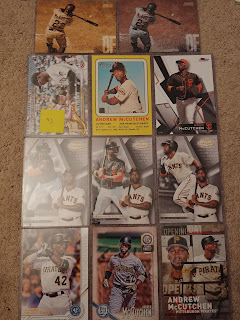 The Stadium Club Gold in top left corner is numbered to only 10 copies. The others are all /49. 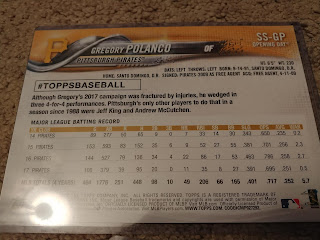 As you can see above the Polanco is a cameo of Cutch on the back.

Overall I had an awesome time meeting new people like Chuck who I waited in line with for an hour just to get into the show, Brad and Val, Debbie who I interacted with on Twitter but didn't get a chance to meet up with, the staff at The Philly Show, and of course Andrew McCutchen. 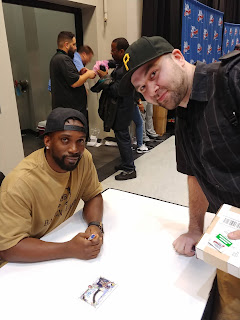 Once I get my official photo sent I will share it.  Unfortunately they ran out of paper mid afternoon Saturday and will need to mail it to me rather than having me pick it up at the show.
Posted by Collecting Cutch at 8:41 PM