Food Journal For the Day

I was challenged by Fuji to somehow connect an Andrew McCutchen baseball card to celebrate Saturday's National Butterscotch Pudding Day.
It was extremely short notice so I didn't have time to gather up cards to somehow make that happen a few hours after reading that ridiculous idea.
But Fuji is a good blogging friend and I didn't want to dismiss the idea so before I get to showing off some pudding, here is my food journal for the day
I started the day off with some Cinnamon Toast Crunch 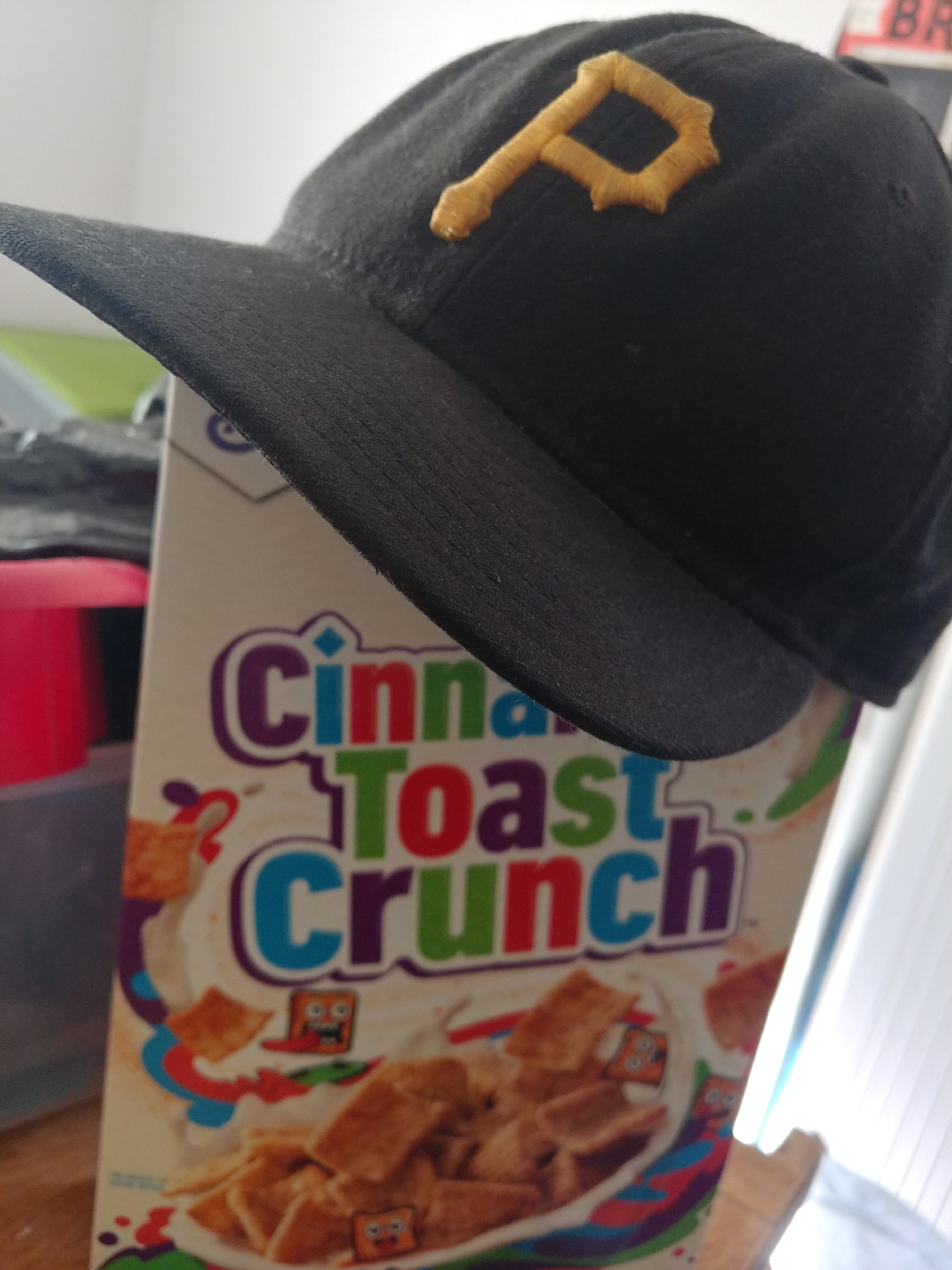 CTC is the perfect cereal if you ask me.
The back of Andrew's 2013 Topps card talks of how Cutch toasted pitchers in 2012, specifically a 50 at-bat span when he batted .560 and crunched 7 HR. 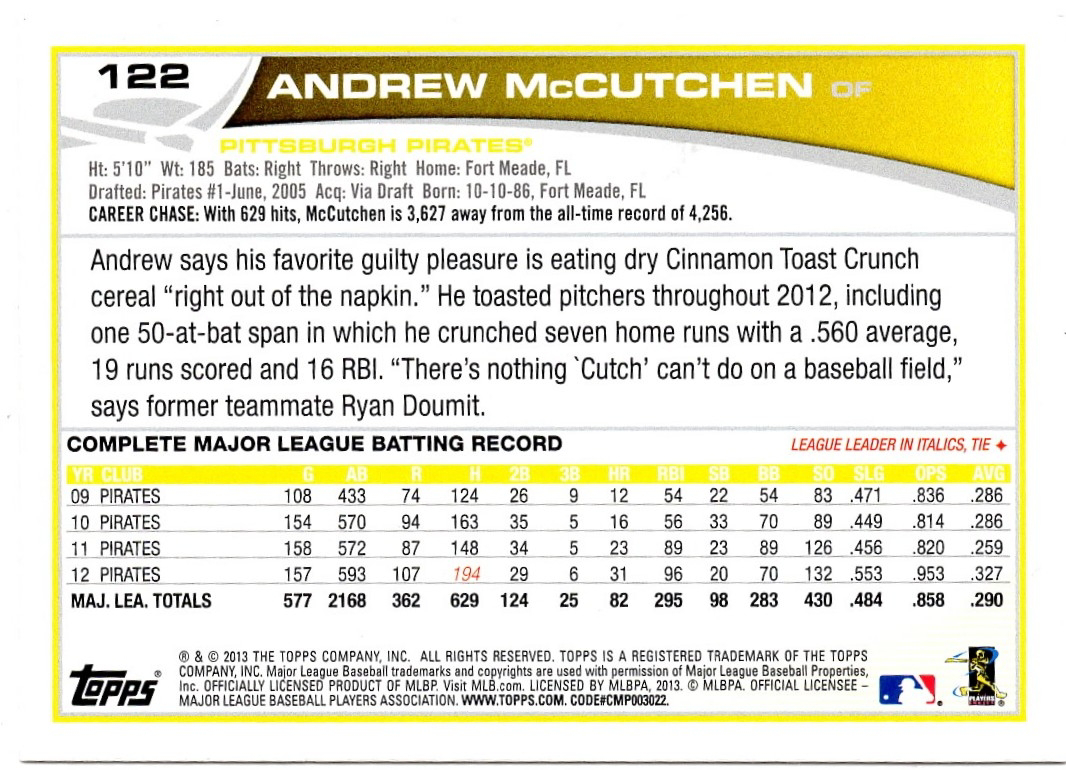 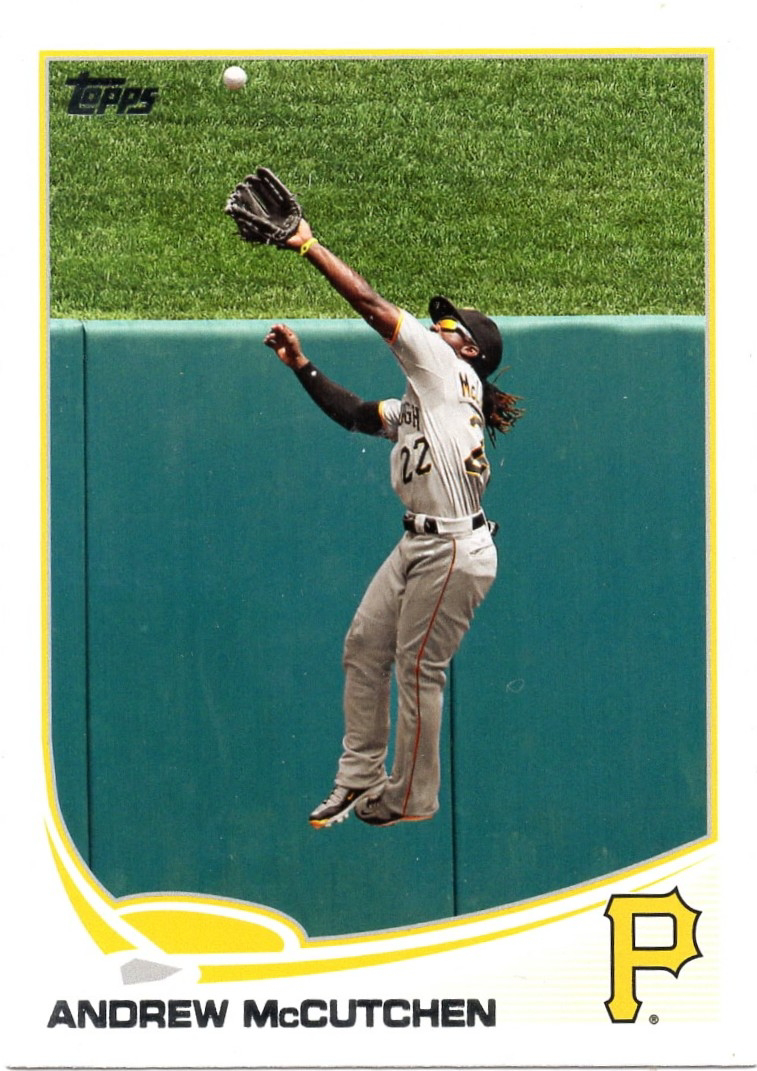 In the afternoon for lunch, I ordered a Pizza Hut big box to share with the lady of the household as I watched the Steelers play against the Broncos. 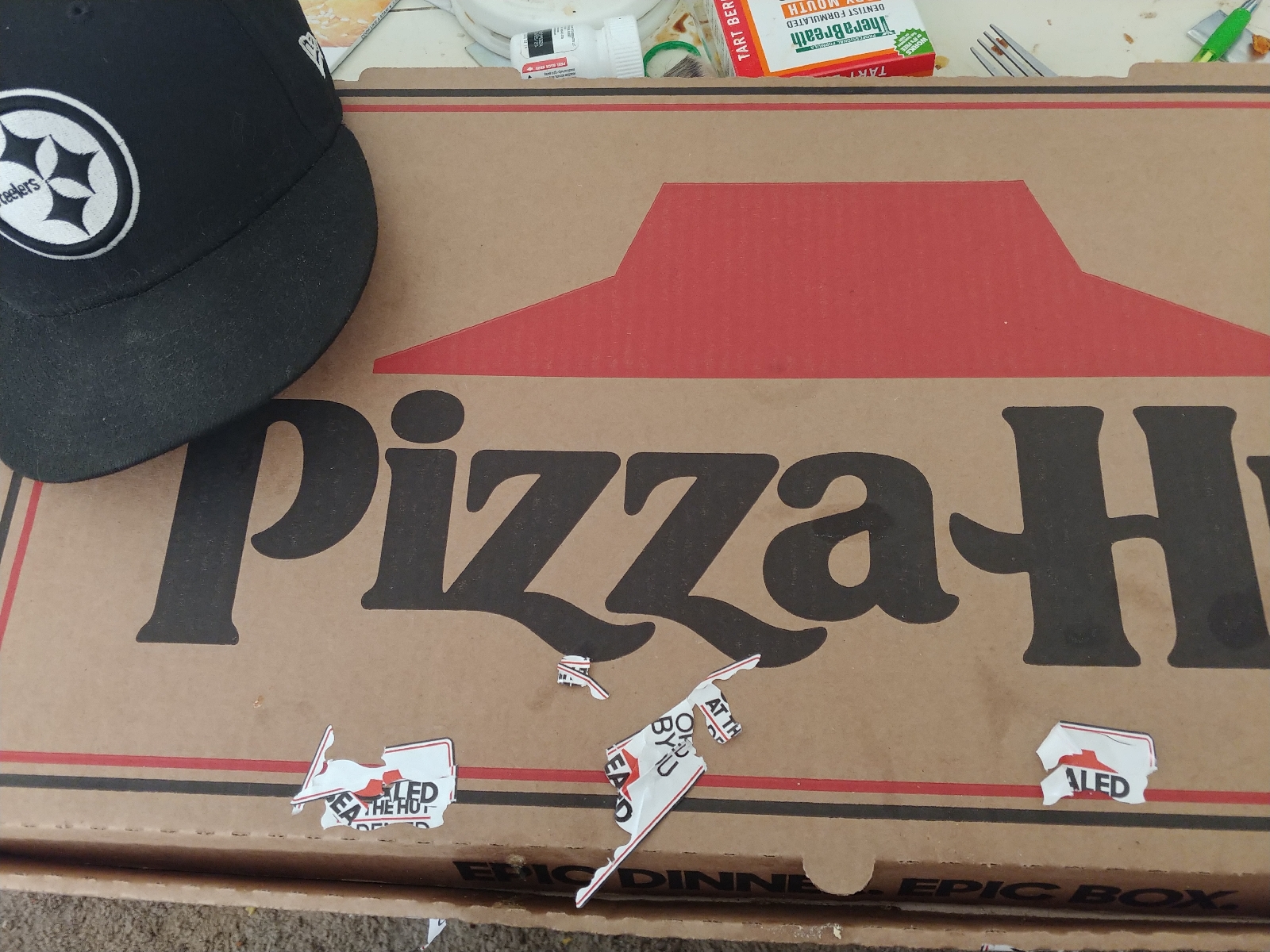 Pizza and burritos are my two go to foods for lunch.  I normally don't get Pizza Hut, but rather instead get pizza from the local pizzeria by my work.  Since we were both home for the afternoon, we got the big box to share wings, breadsticks, and 2 personal pizzas.
On the back of Cutch's Bowman Chrome card, it discusses that he is also a pizza lover. 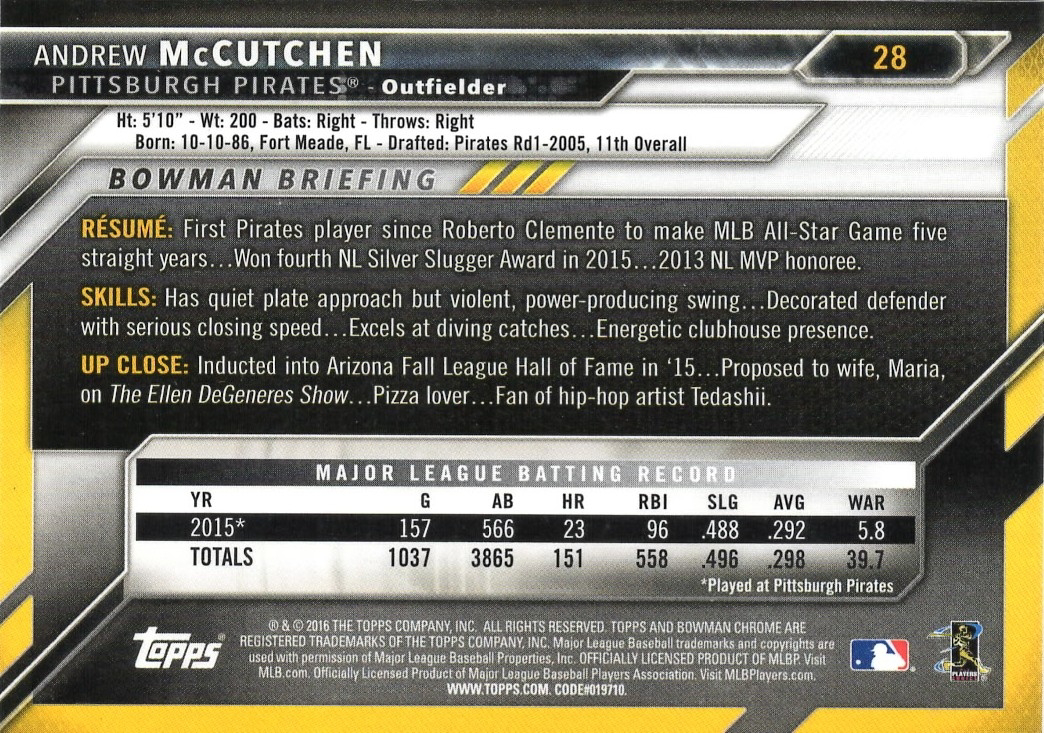 And yes I do sometimes put pineapple on my pepperoni pizza. It is a topping I recommend. 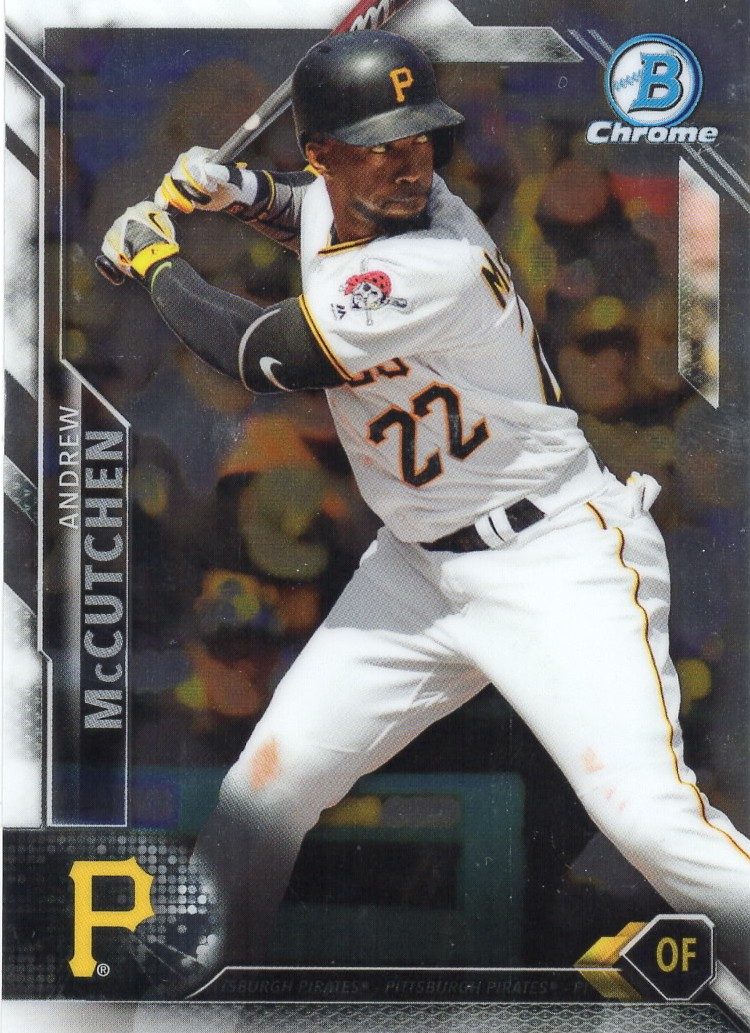 For dinner, I finished up with baked ziti. 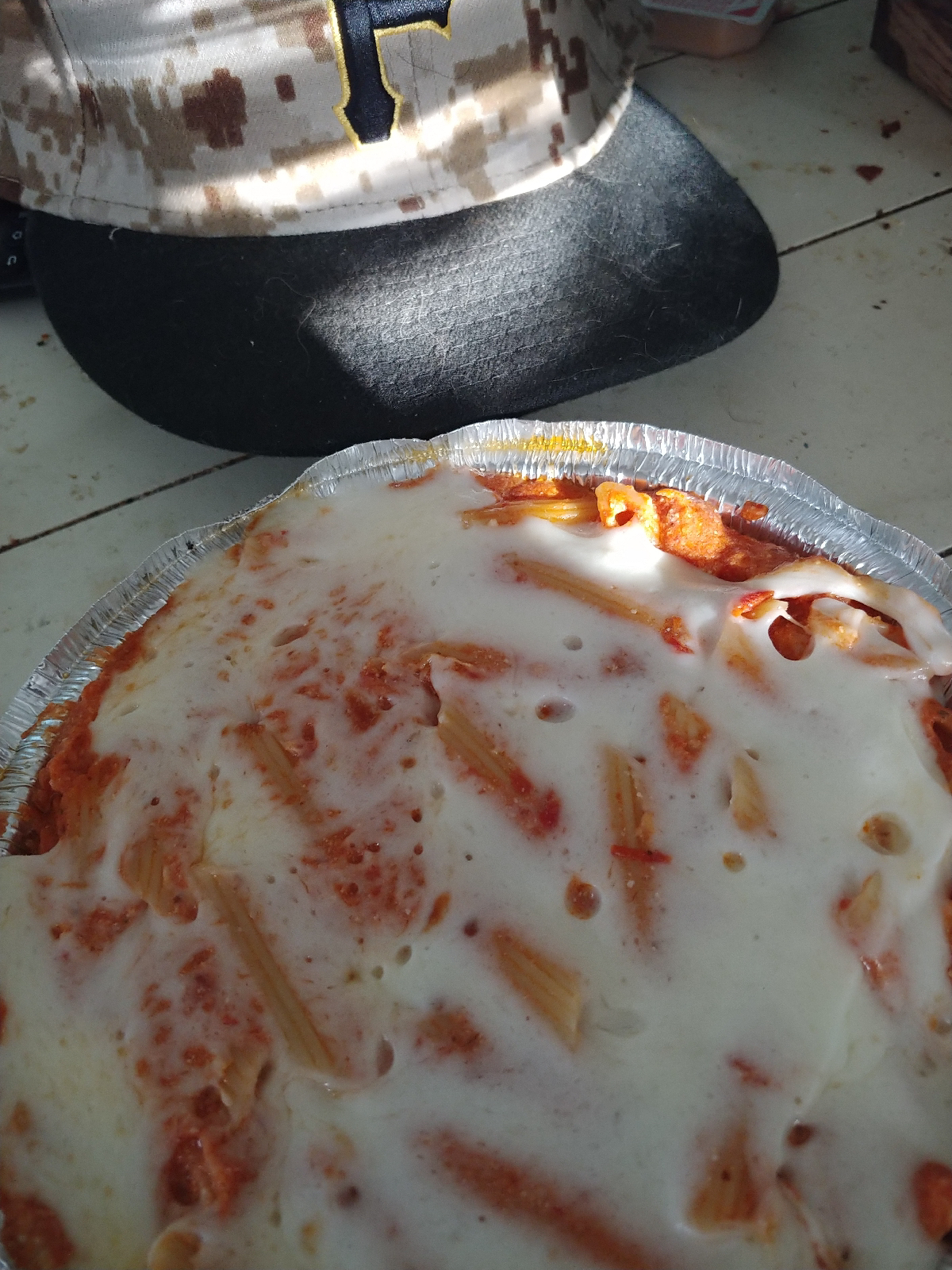 Look on the back of a 2018 Bowman card featuring Andrew McCutchen and you can see that he is a fan of baked pastas too. 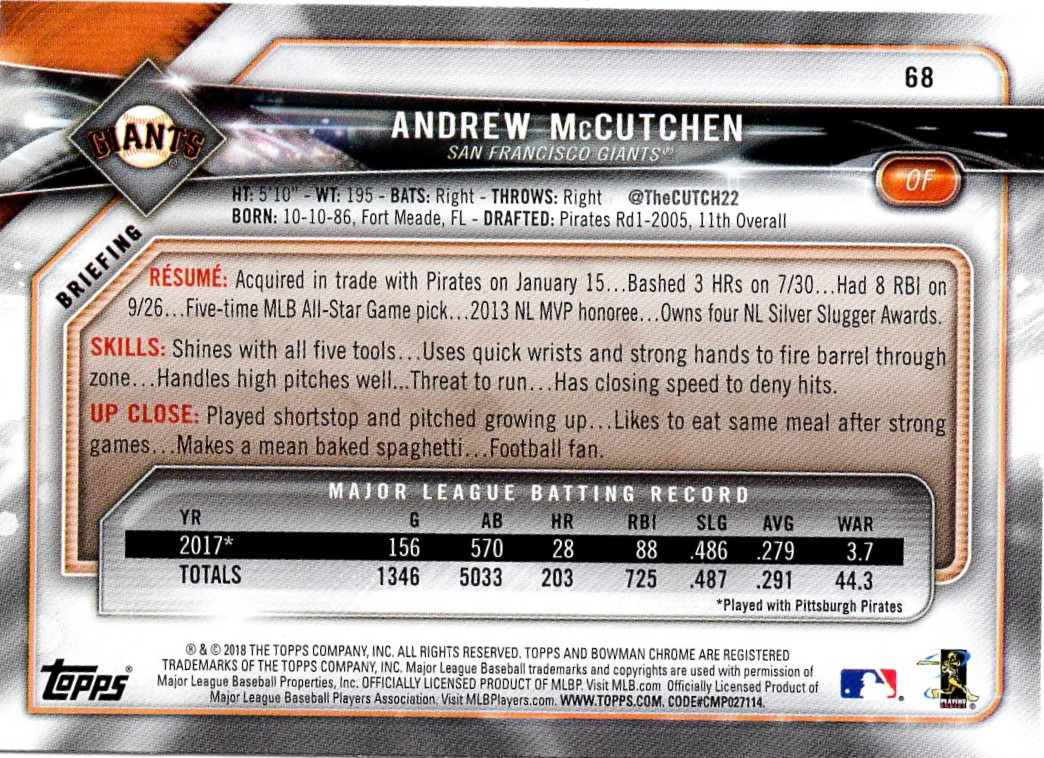 I never had baked spaghetti, but evidently Cutch makes a mean plate. 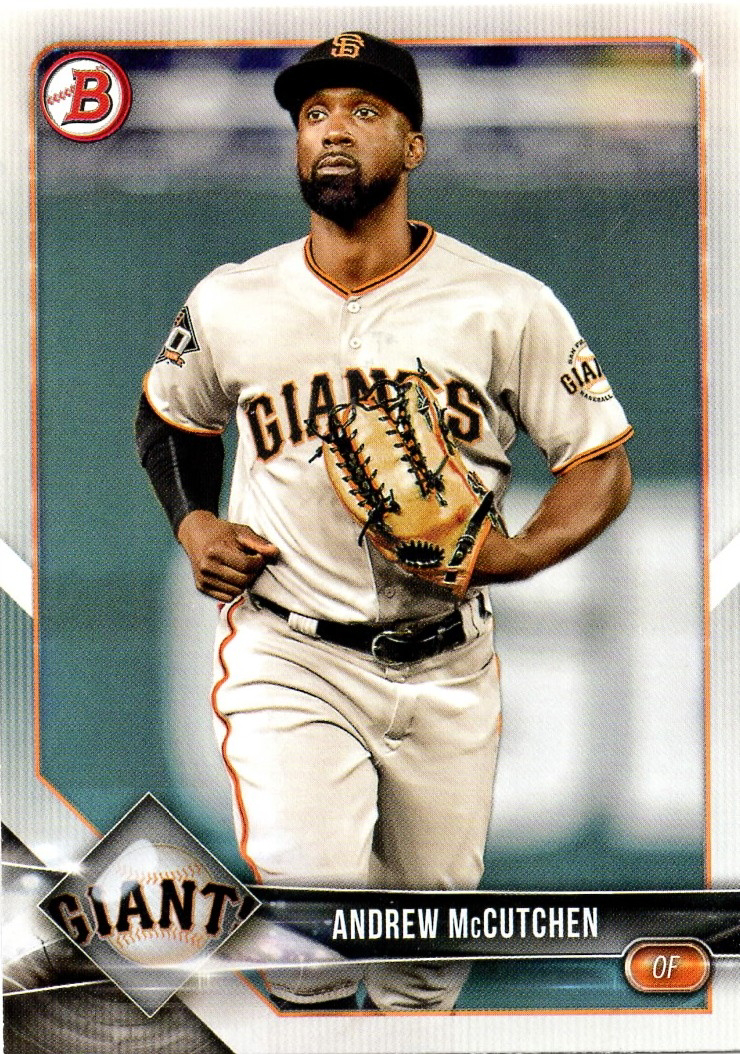 Finally we finish with dessert.
And alas, it was almost a perfect circle to where it all began. 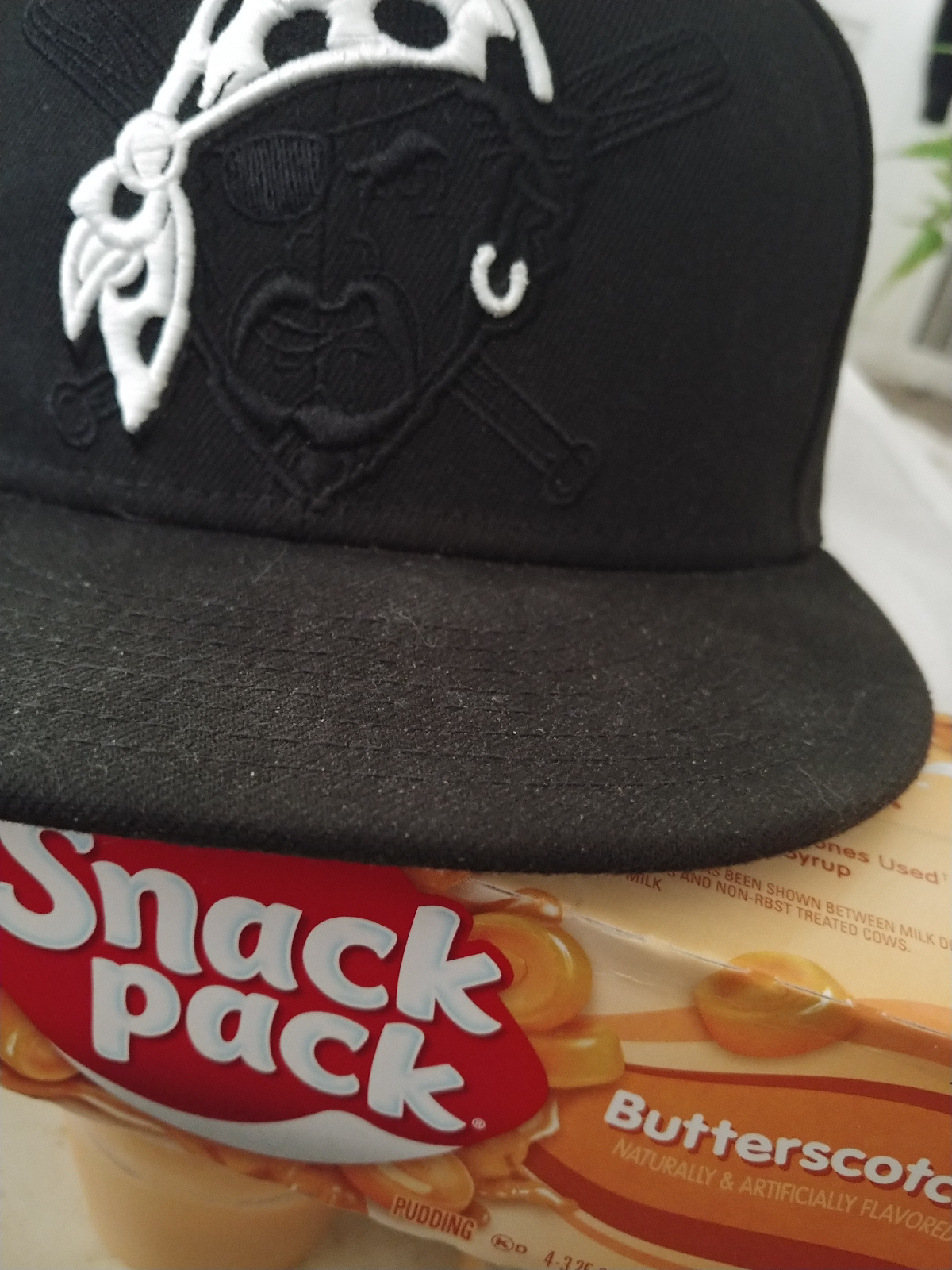 Butterscotch pudding
Unfortunately I don't have any cards that reference pudding.  You win Fuji, you win!!!
Wait, what's this????
Emerging from the Pirates Dugout? 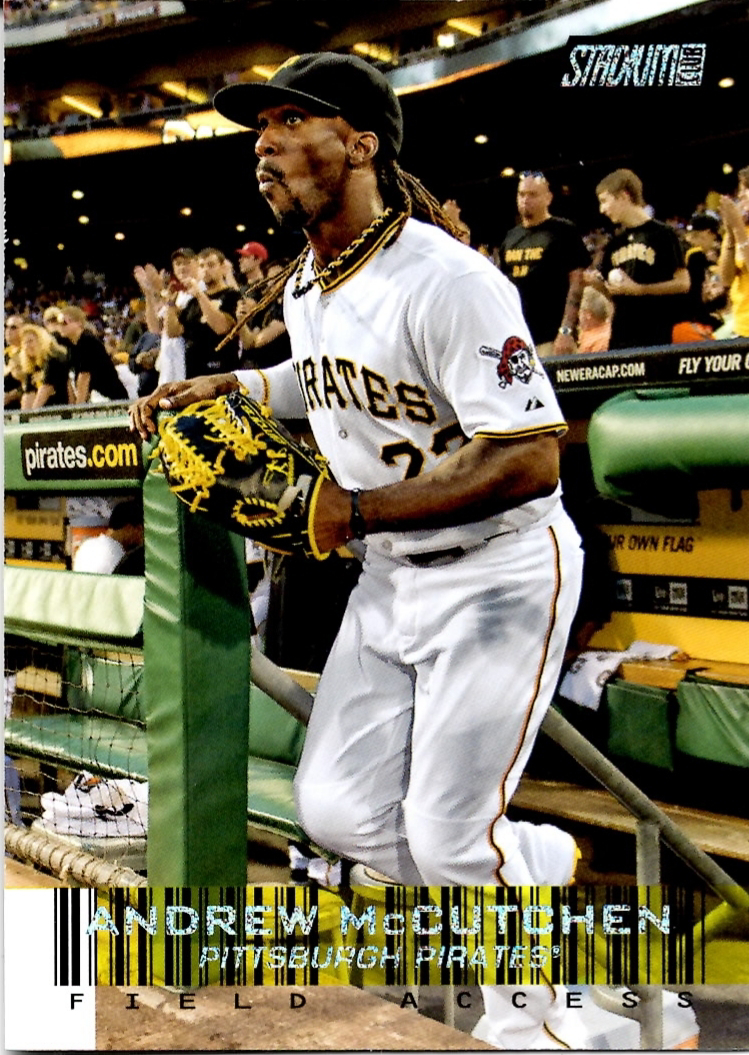 Why, it's a rainbow foil field access Stadium Club card from 2014? 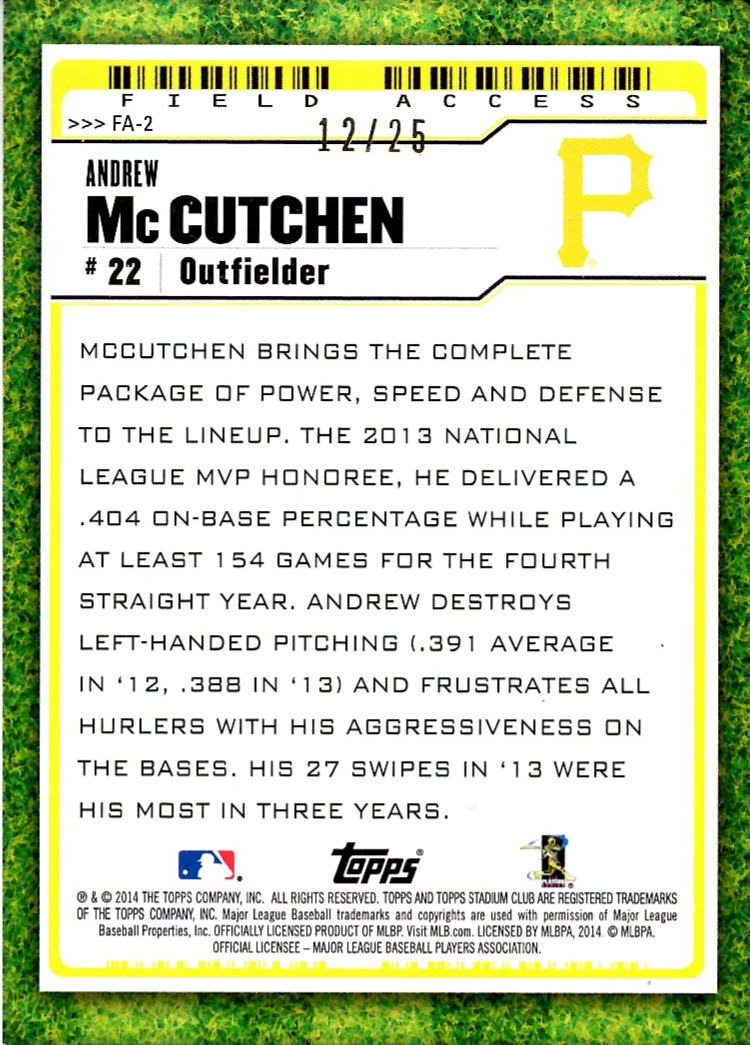 It's serial numbered on the back 12/25.
Is that significant to Pirates fans?
Does that have anything to with pudding? 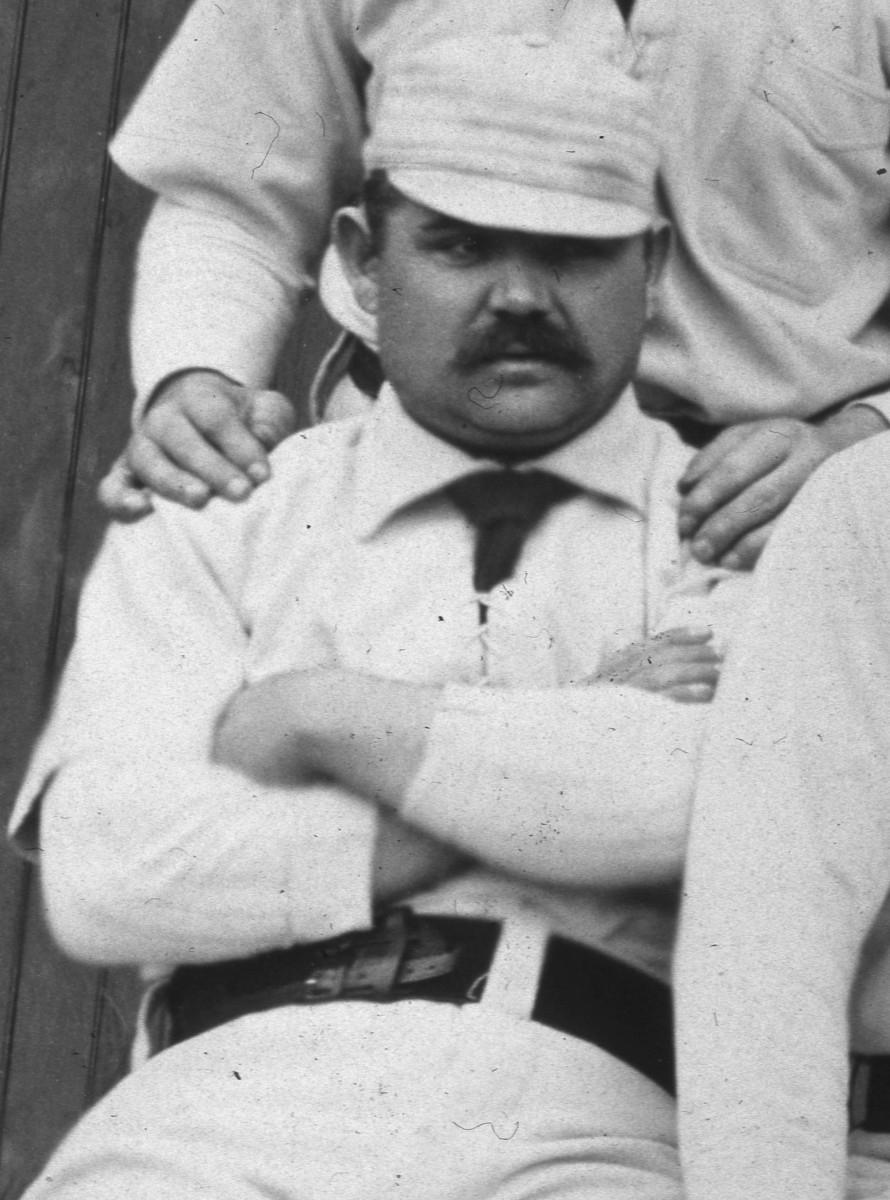 Why yes it does! It ties in with this angry looking man who became baseball's first 300 game winner and the most pitching starts in a season (75), James "Pud" Galvin. 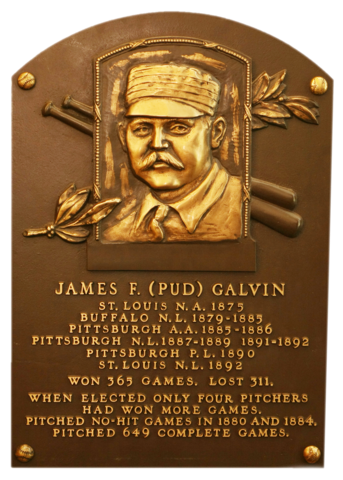 "Pud" pitched for Pittsburgh from 1885-1892.  He is the franchise all-time leader in wins and was elected into the Hall of Fame in 1965 as part of the veterans committee.
Wanna guess his birth date?

Is "Pud" an acceptable tie in to pudding?
I'll let you decide...
Leave a comment below and tell me what else you would like to see in the coming days leading up to October.
I will announce the 1st contest winner tomorrow.
Posted by Collecting Cutch at 5:56 PM