The Pirates 2017 season began yesterday and sadly despite looking like a great pitching duel was about to occur at Fenway Park, the official score keepers saw things differently.

Gerrit Cole was cruising through the first four innings facing the minimum.

With two outs in the fifth inning, Jackie Bradley hit a ball to right field that should have been just a double but Cutch misplayed it and it became a triple.  That was followed by the Kung Fu Panda Pablo Sandoval hitting an infield "single."  Jordy didn't make a perfect throw and it was a difficult play, but well I digress.  Next up came a bunt against the shift that Cole couldn't quite handle cause he was rushing to make the throw.  His facial expressions clearly showed that he was getting frustrated with the defensive alignment and the shifts were causing him to have to throw extra pitches and his time on the mound would be shortened for his first Opening Day start.  A Pedroia single and Benintendi HomeRun later and the game was 5-0 thanks to some errors (physical and mental) that weren't accounted for.

Game 1 of 162 is in the books.
The Pirates are 1 games out of first.
They have the same record as the Cubs.

Today's card is an older card from 2013 with roots in the Red Sox and no one even knew it.

The front of the card features Gerrit Cole and Andrew McCutchen as Franchise Forerunners. 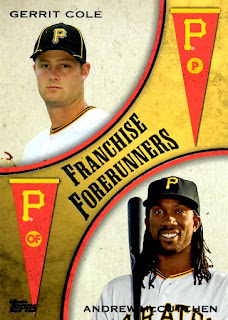 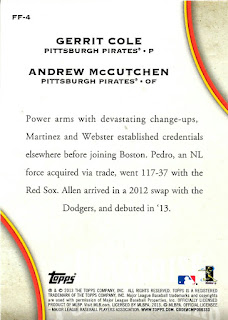 Instead it discussed Pedro Martinez and Allen Webster, who was a highly regarded prospect for the Red Sox at the time.

WEBSTER UPDATE: After being traded to the Diamondbacks he was released and picked up by the Pirates for 21 days during the 2015 offseason.  He is currently signed to a minor league deal with the Texas Rangers.
Posted by Collecting Cutch at 4:26 PM