Do you want to build a snowman?

The Topps Holiday release is one of my favorite each year.  It makes for a very fun rip and provides lots of joy along with a guarantee hit per box.
It's nice to know that some parents rip these boxes with their kids and help bring younger generations into the hobby.
For me, I just want those Andrew McCutchen cards though.
Cutch had a base card, base metallic, Christmas tree ornament, snowman relic, hat relic, and hat relic autograph in the release.  I've manage to snag all the cards I needed and when that wasn't enough I set my eye towards making unofficial rainbows of the jersey relics.
Often times the jersey relics included in products like this, Topps flagship, Topps Heritage, and Allen & Ginter include plain jersey swatches.
Sometimes there are so many jersey swatches for a player that they begin to "cut" into other jerseys to provide variety for the release.
I've shown this off before with my Allen & Ginter Jersey rainbow.
Well, now it's time for 2021 Topps Holiday Wal Mart mega boxes to have the rainbow relic chase. 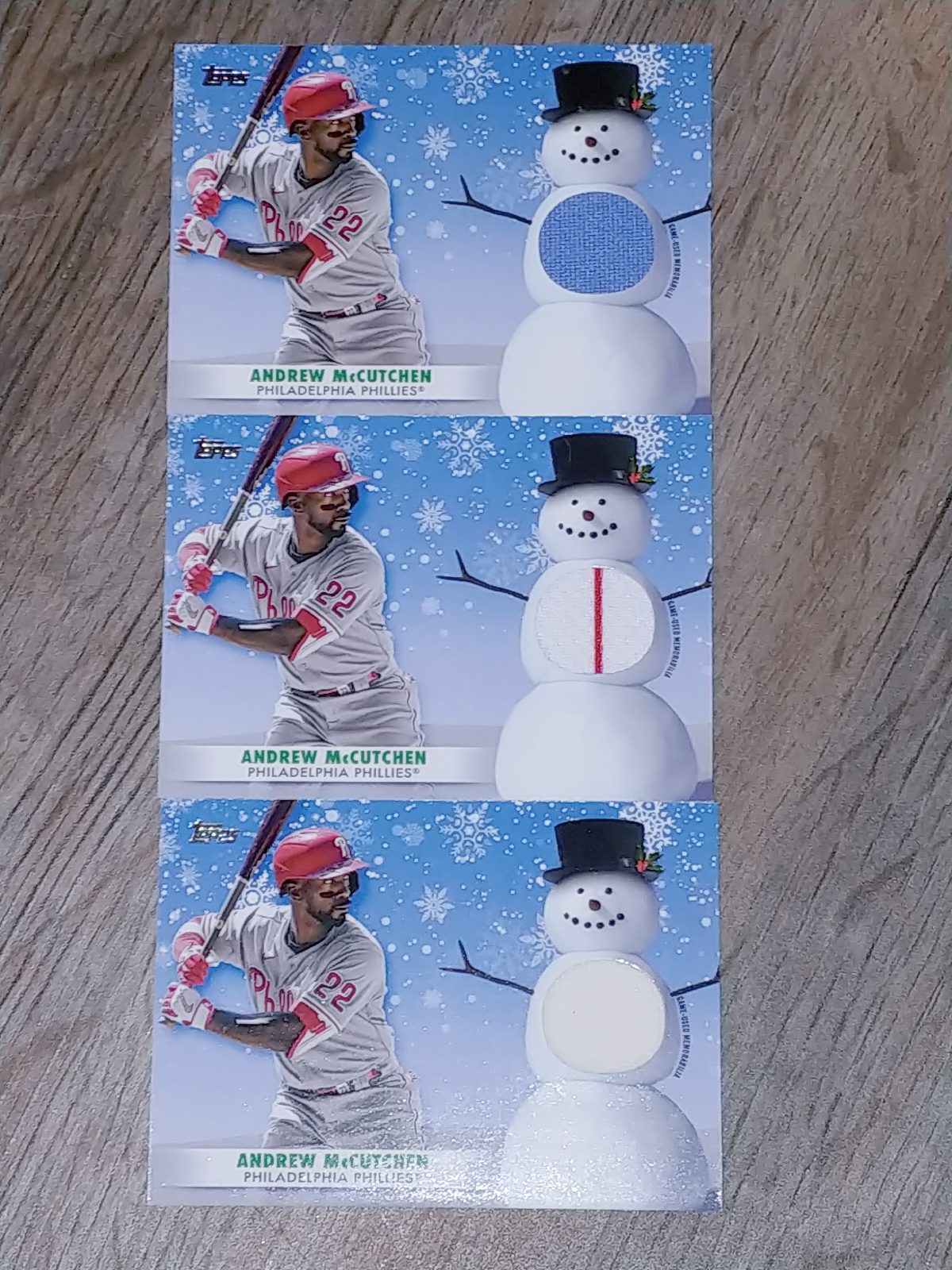 Pictured above are a jersey swatch from the baby blue throwback uniforms worn by the Phillies, a pin stripe home jersey, and a plain swatch from a home jersey.
Do you chase after different looking relics of the same card?

Posted by Collecting Cutch at 12:06 AM 2 comments:

A long overdue Thank You

Because of moving and storage I didn't post much in 2021.  Along the way there were a few gifts that got overlooked.
Ray from All Cardinals All the Time sent me a 3 card random act of kindness over the summer and they were all 2021 Topps Chrome needs for the collection. 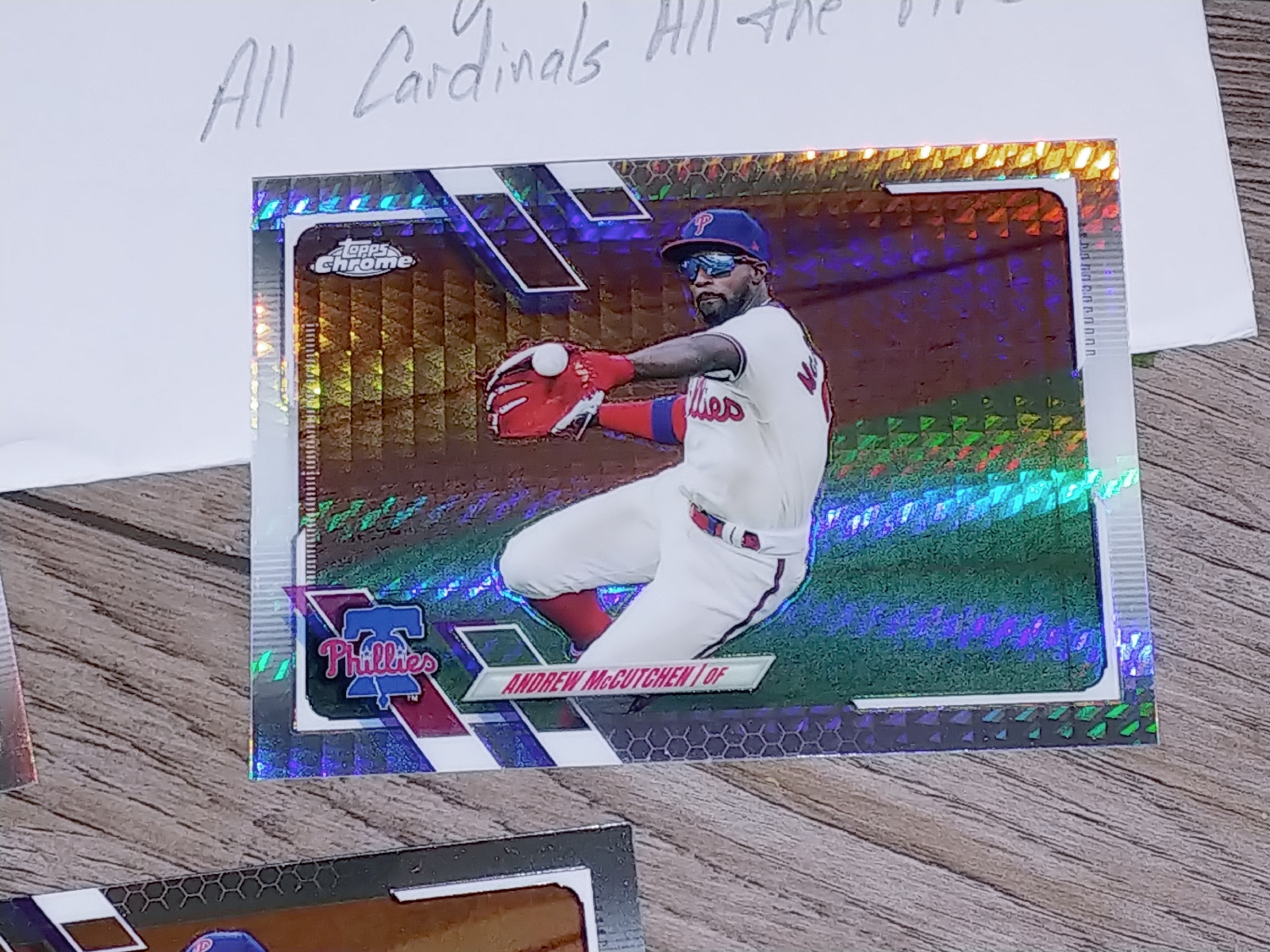 The prism refractors are absolutely beautiful. 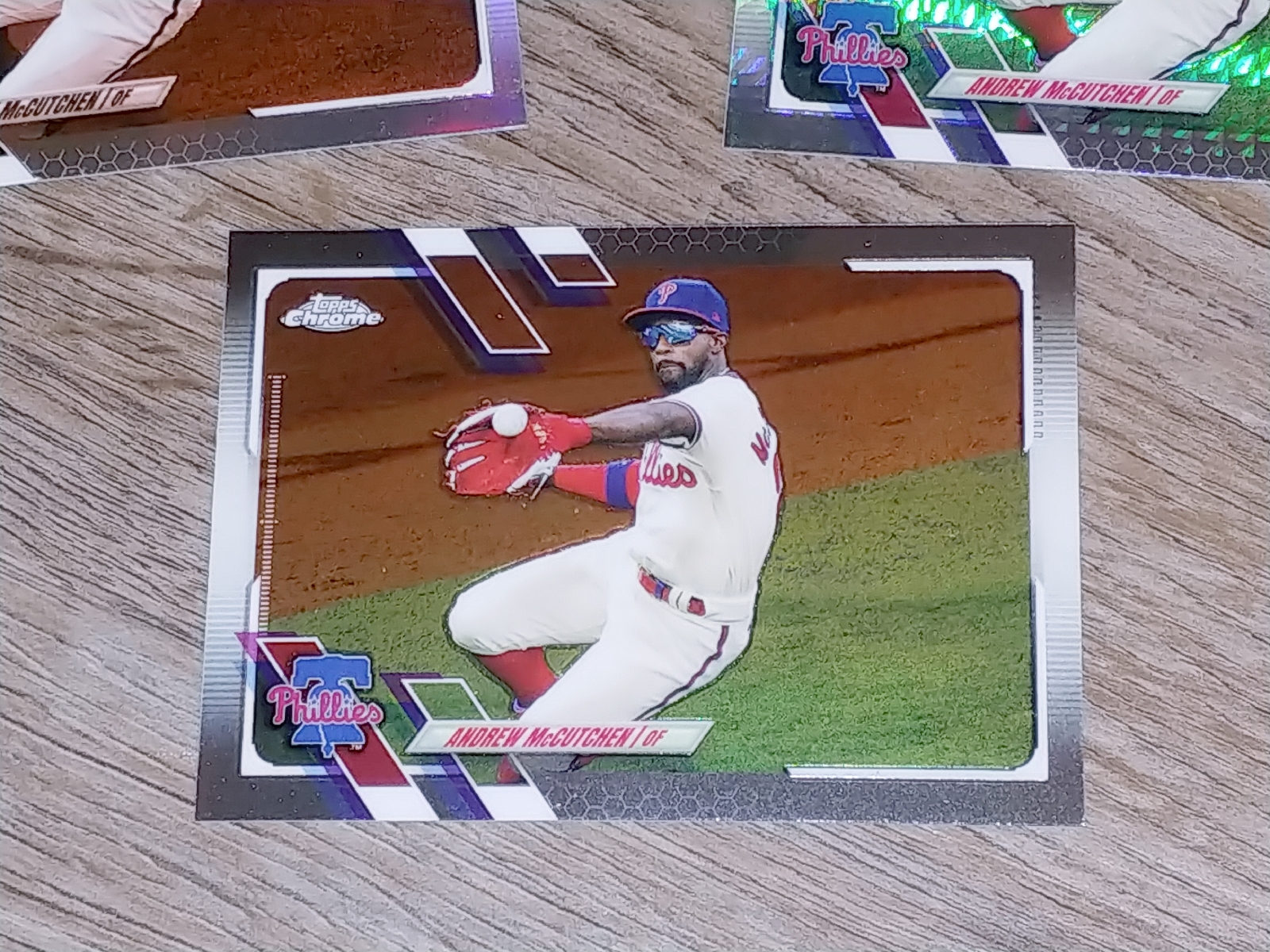 This is the base card from 2021 Topps Chrome. 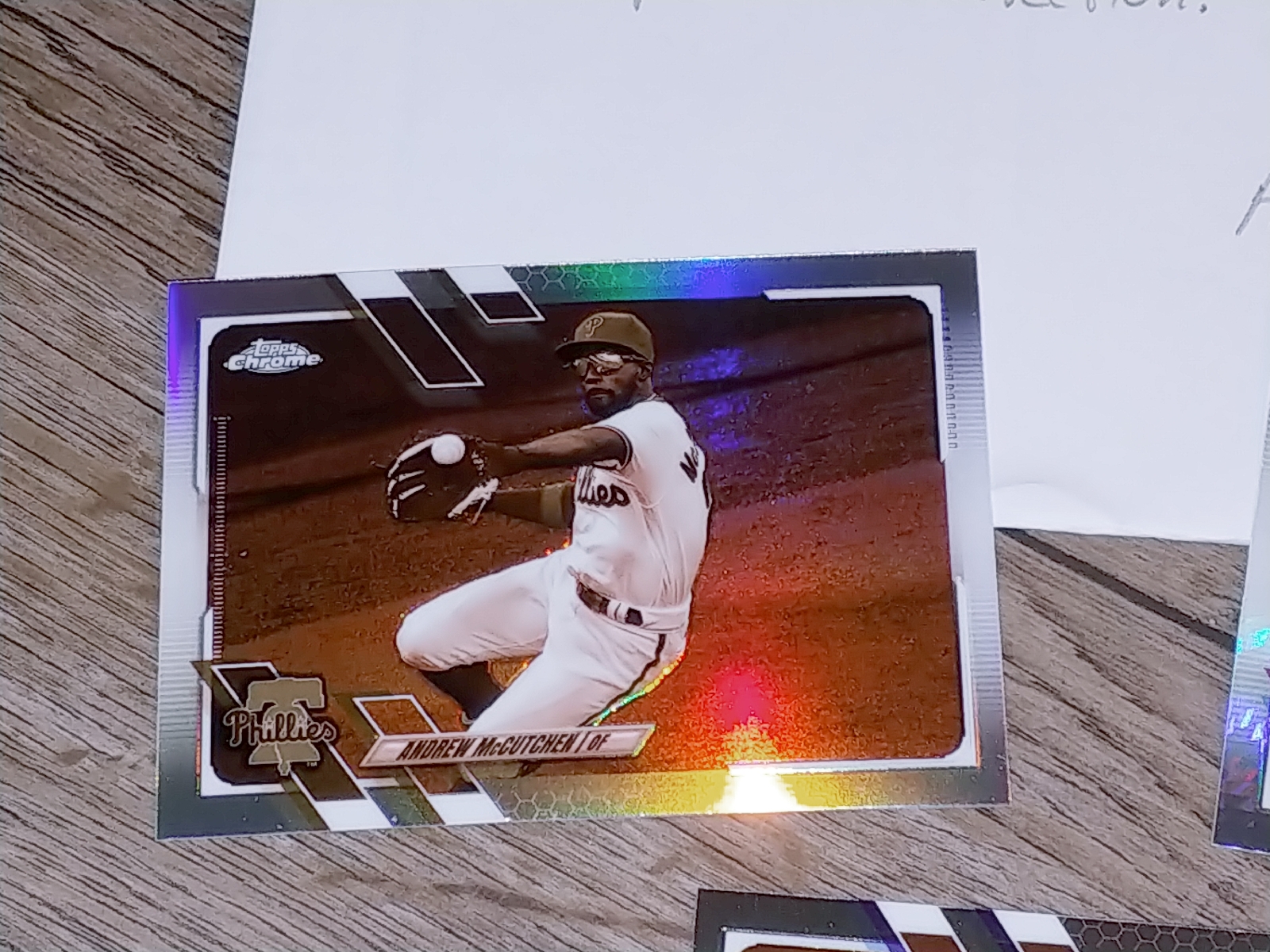 My favorite though is the 2021 Topps Chrome sepia refractor.  The old time looking photo with new technology really make the etching on the card stand out.  It is just a great looking baseball card. 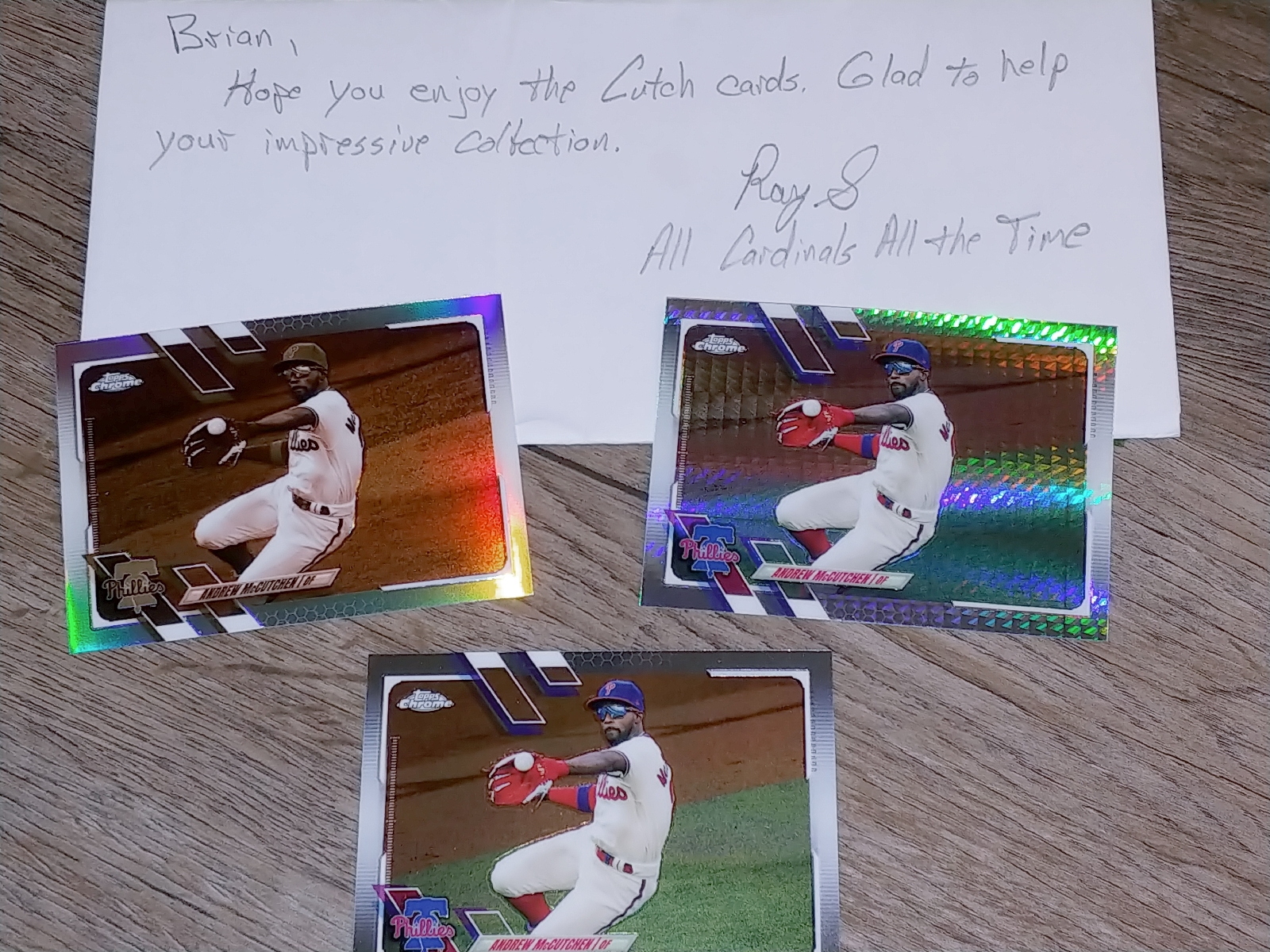 Another act of kindness came via Fuji who sent my girlfriend and I a case of Cactus Cooler, a drink that she loves that we can't find in NJ. 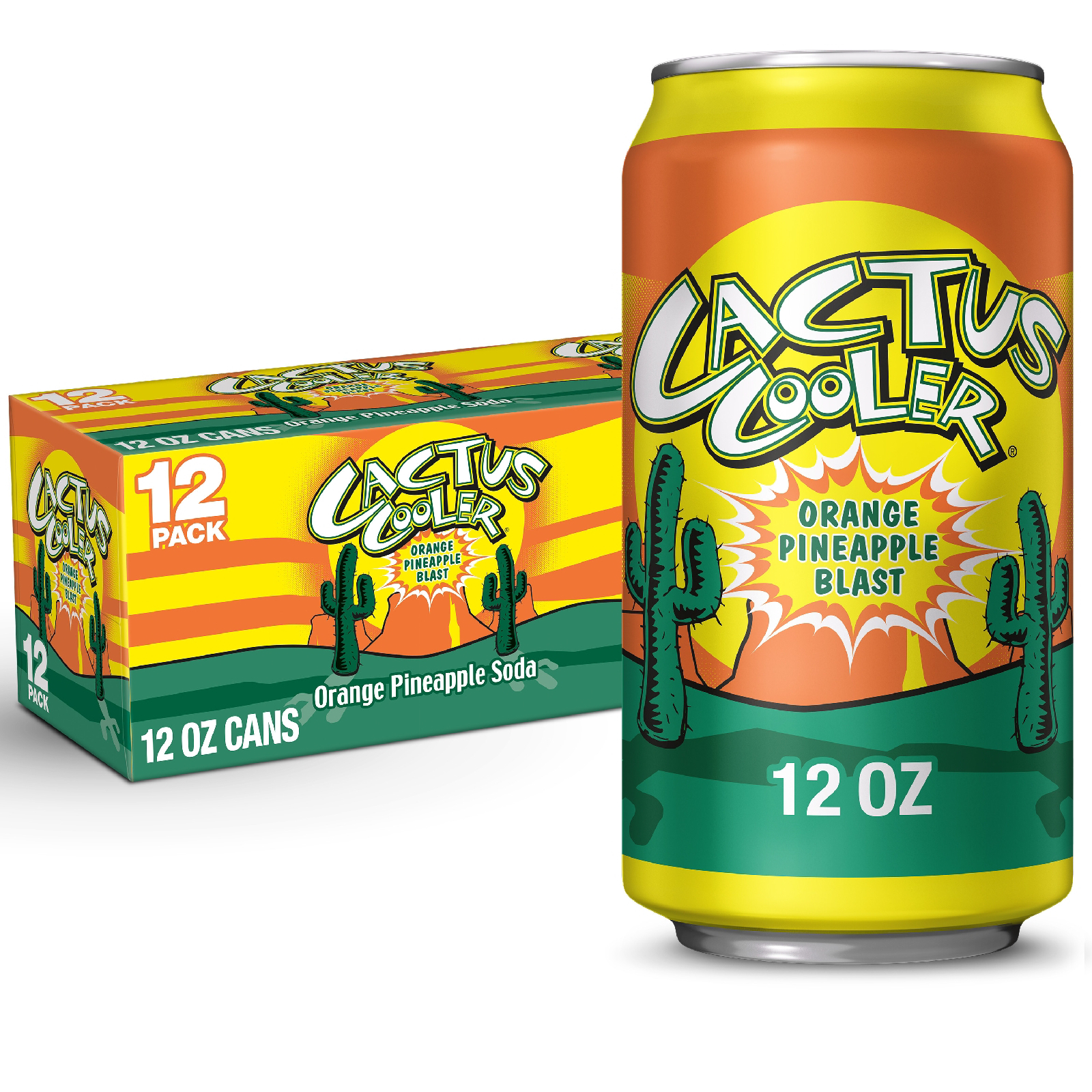 I forgot to take a picture of it so the above image is a stock photo from Google.
Last, but certainly not least is a card that blew me away.  One of my followers on Twitter sent me this amazing one of a kind 1/1 from 2021 Topps Sterling 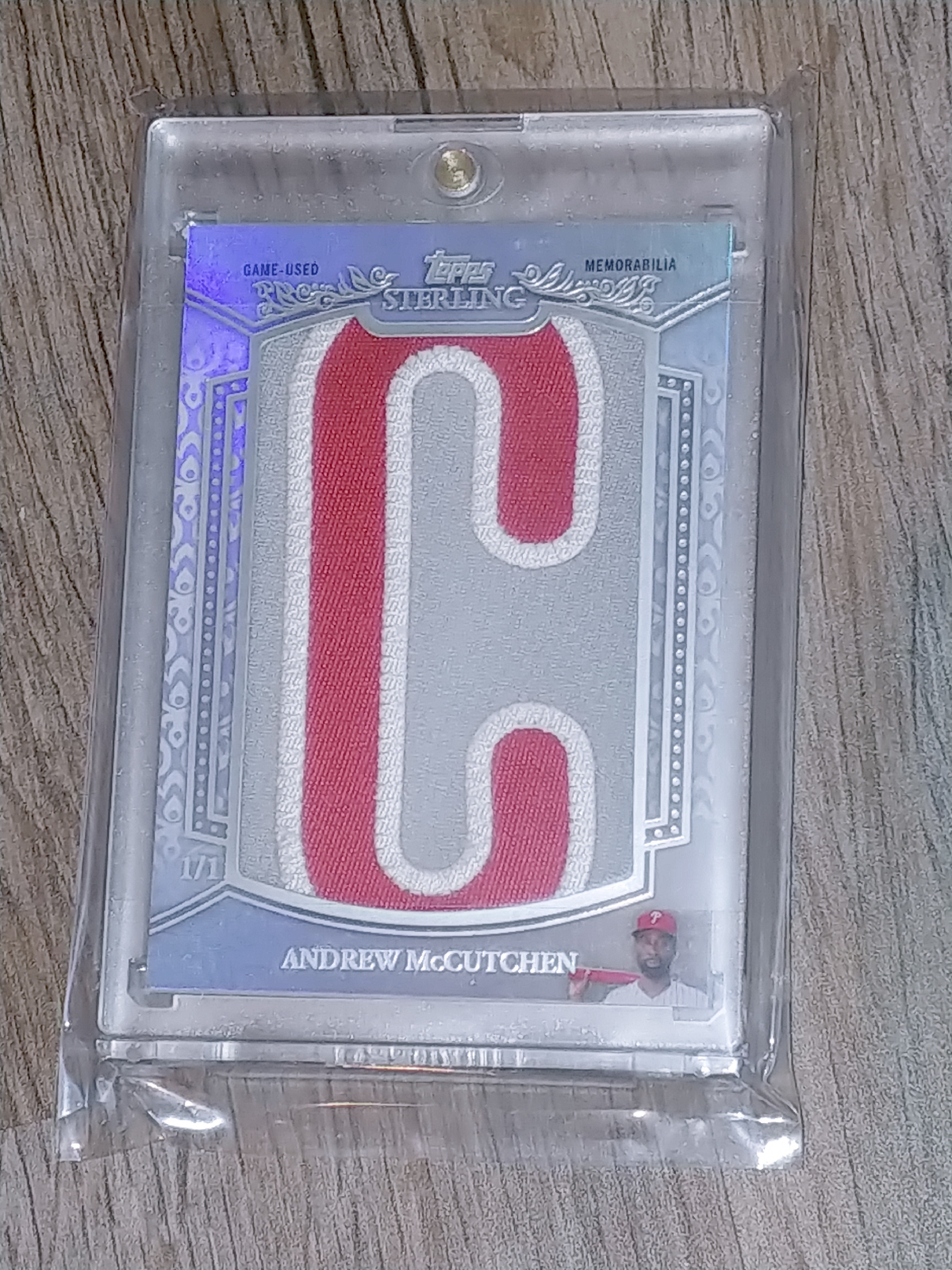 If you use Twitter please give Chris a follow @ItsRuffles318
Thanks to everyone who has followed the blog throughout the year despite not daily content.
Posted by Collecting Cutch at 11:27 PM 4 comments:

When people say I am an Andrew McCutchen supercollector, I live up to it.
I try to collect everything relating to Andrew McCutchen.
Everything that has his name or face on it, needs to go into my collection.
Over the summer I came across a former little league pin collection which contained an enamel pin looking like Lego inspired Andrew McCutchen for the District 12 Florida team.
When I think of District 12, my mind immediately goes to Katniss Everdeen, the heroine from the Hunger Games franchise played famously by Jennifer Lawrence 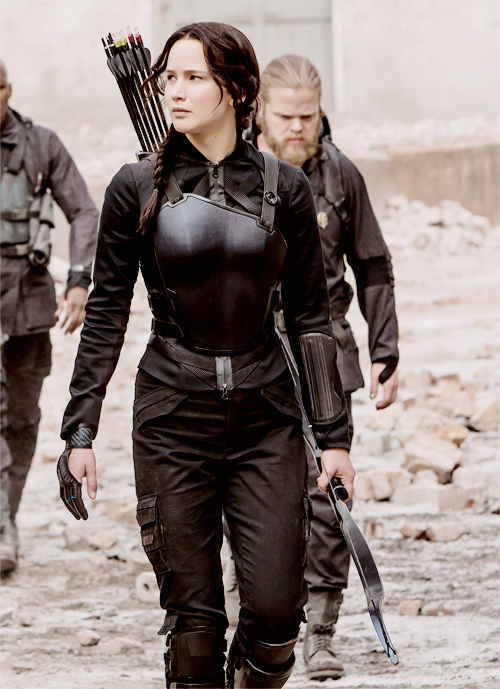 The character offered herself as tribute to prevent her sister from having to enter the Hunger Games. 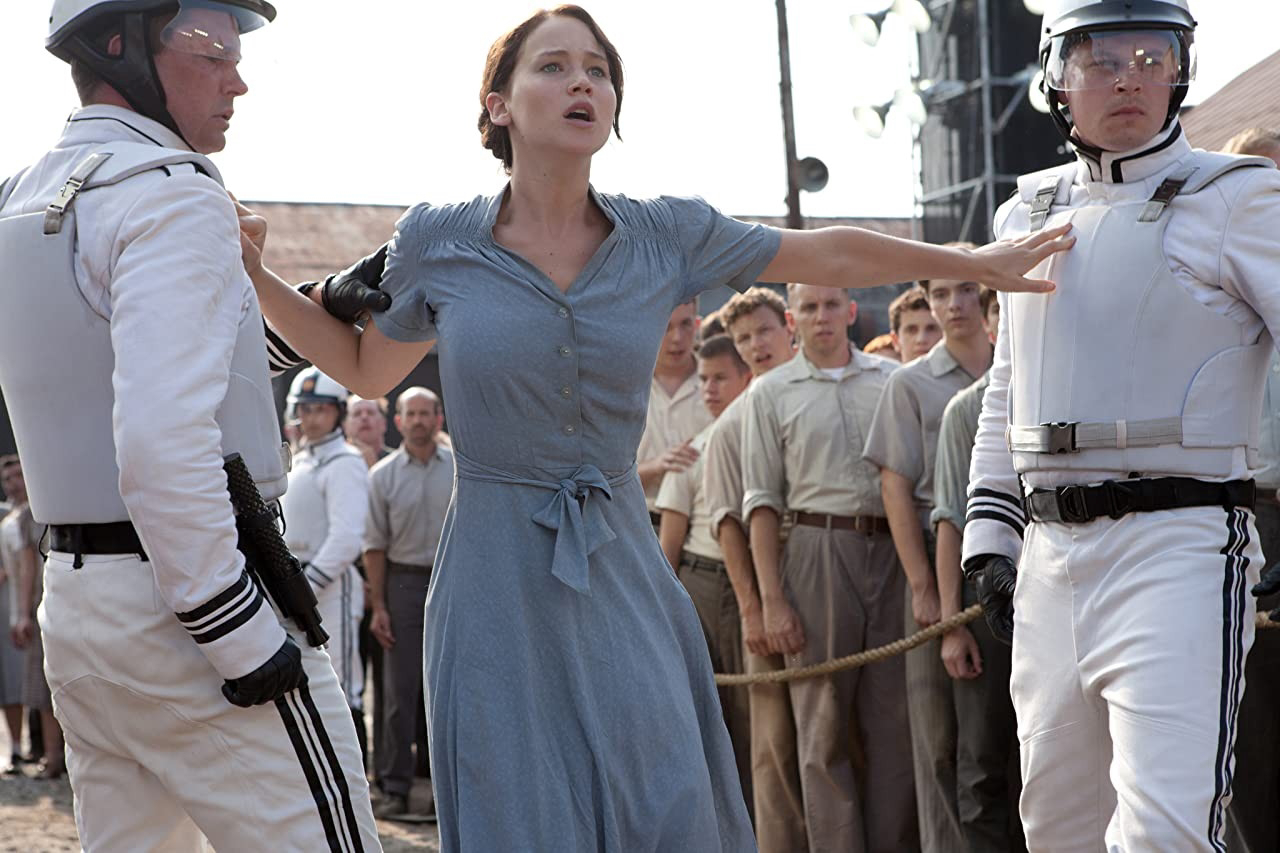 She won the Hunger Games as a representation of District 12, a small area of Panem known for their mining. 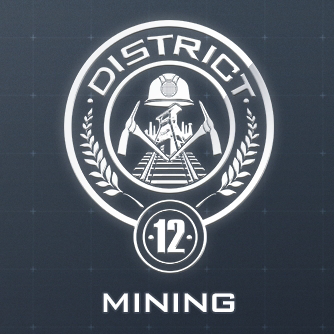 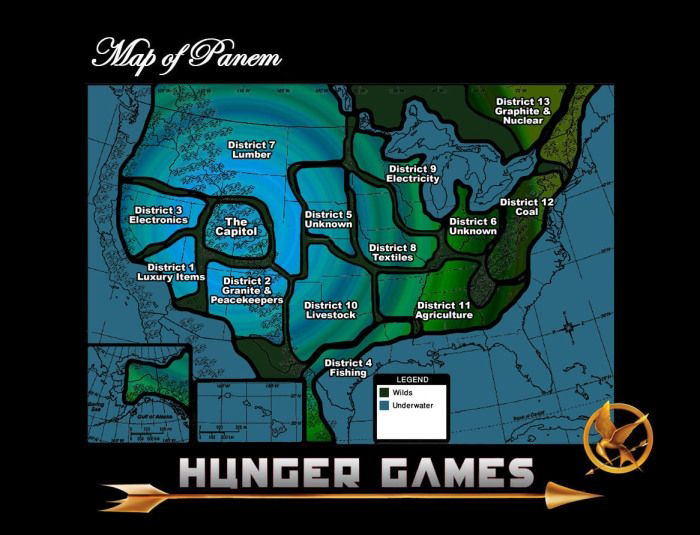 She later went on to challenge how all of Panem is run and started an uprising. 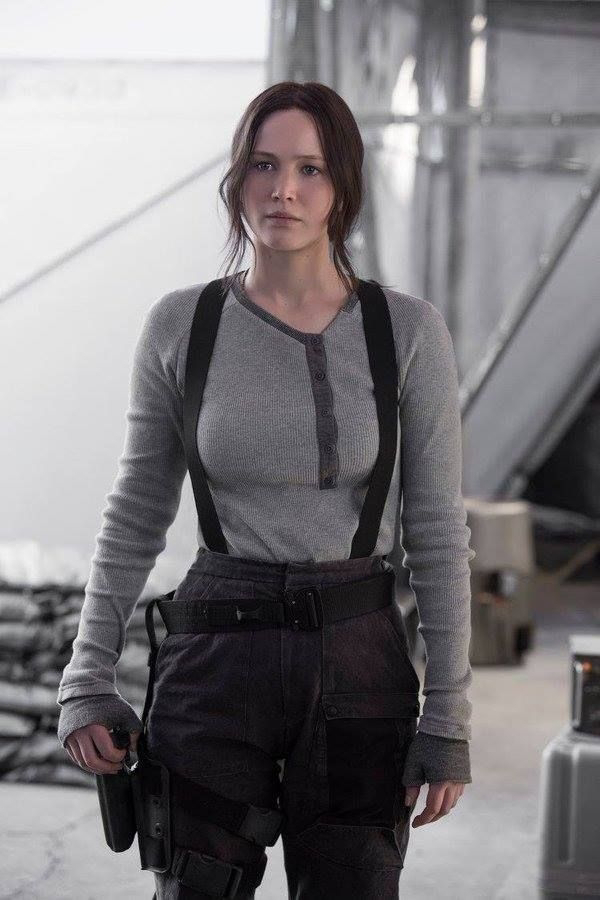 Now that you've been graced with a bit of Hunger Games trivia, let's get back to that District 12 pin....
Here's the front of the pin 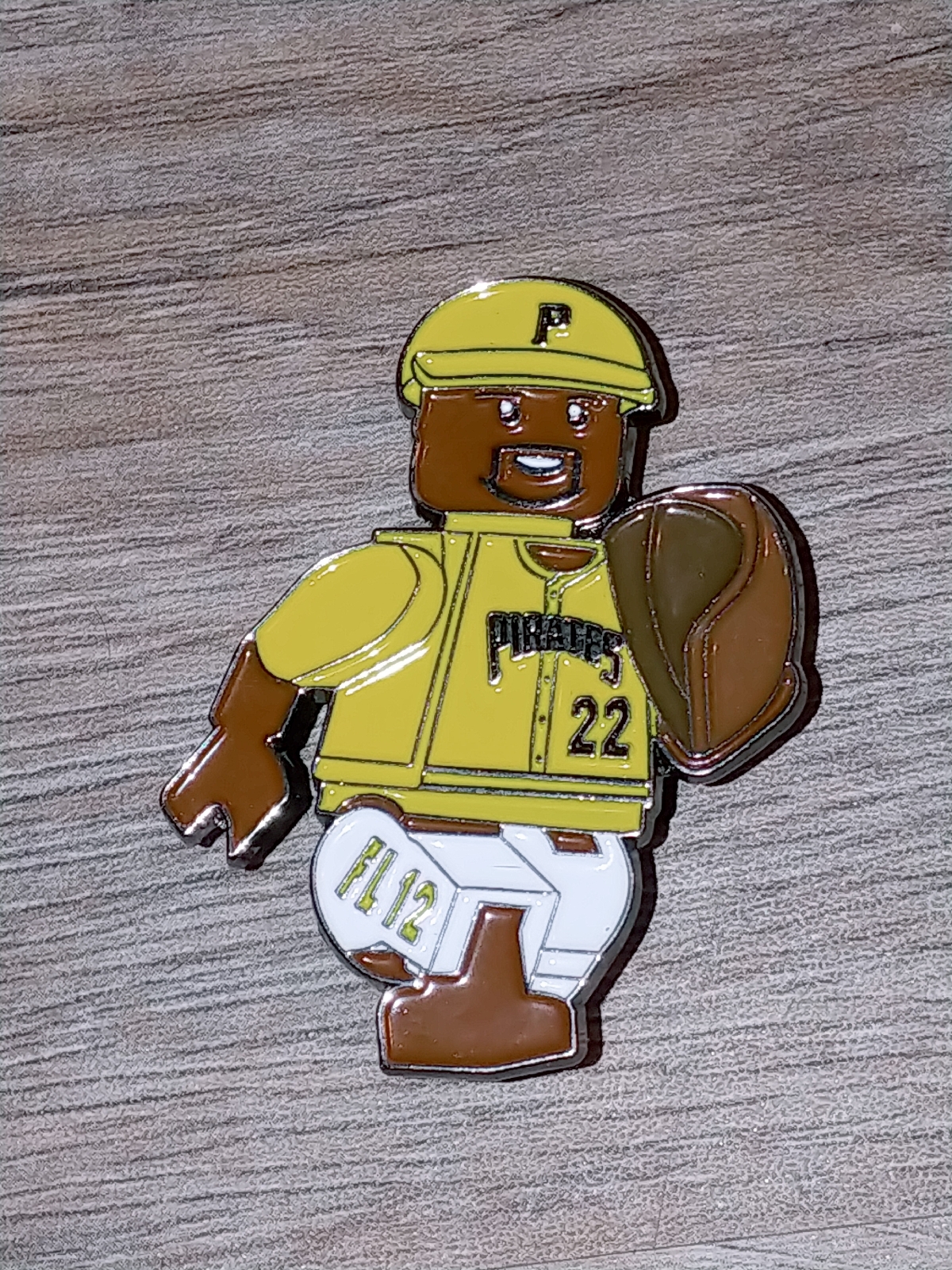 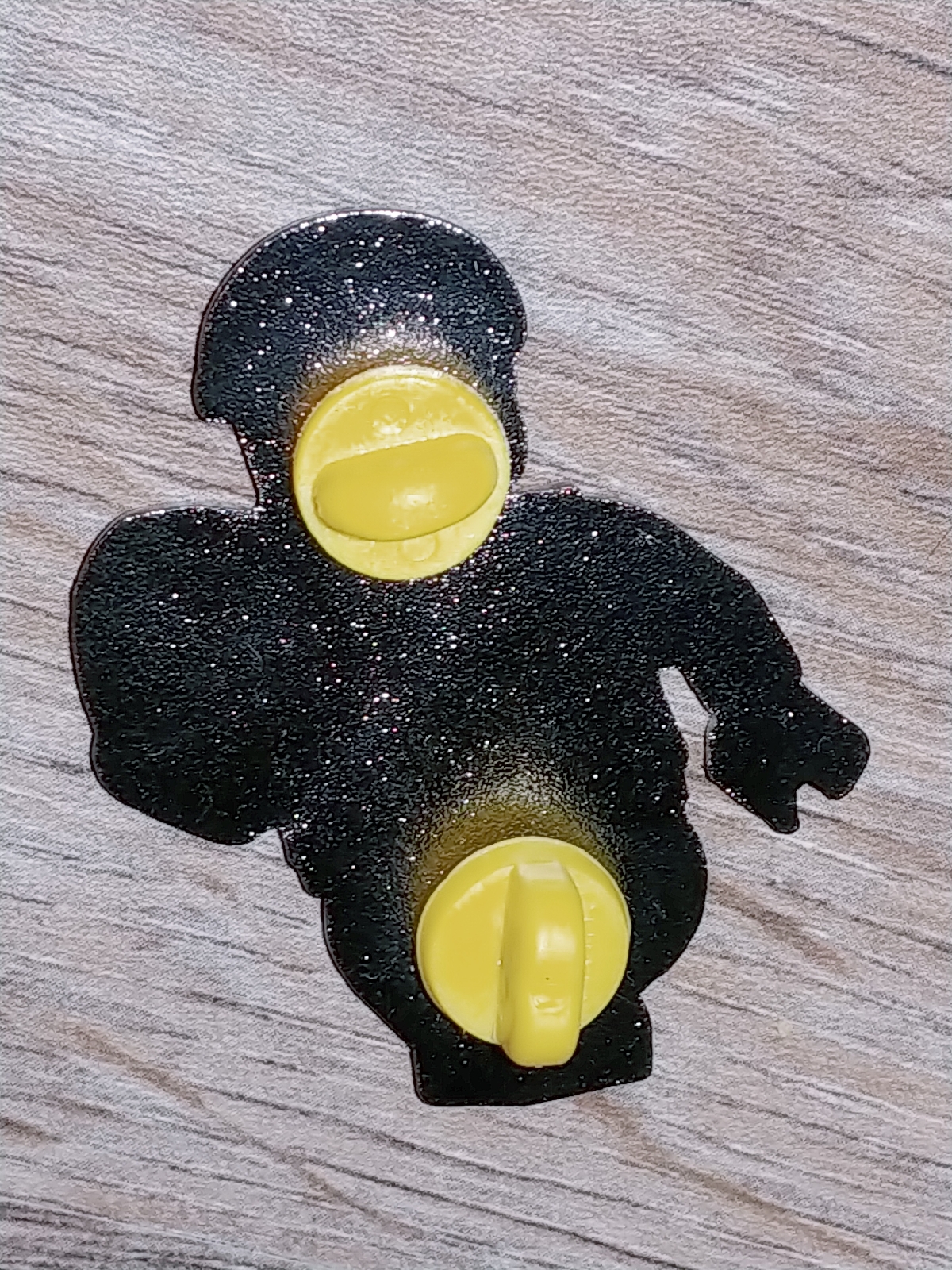 Next to a standard size baseball card 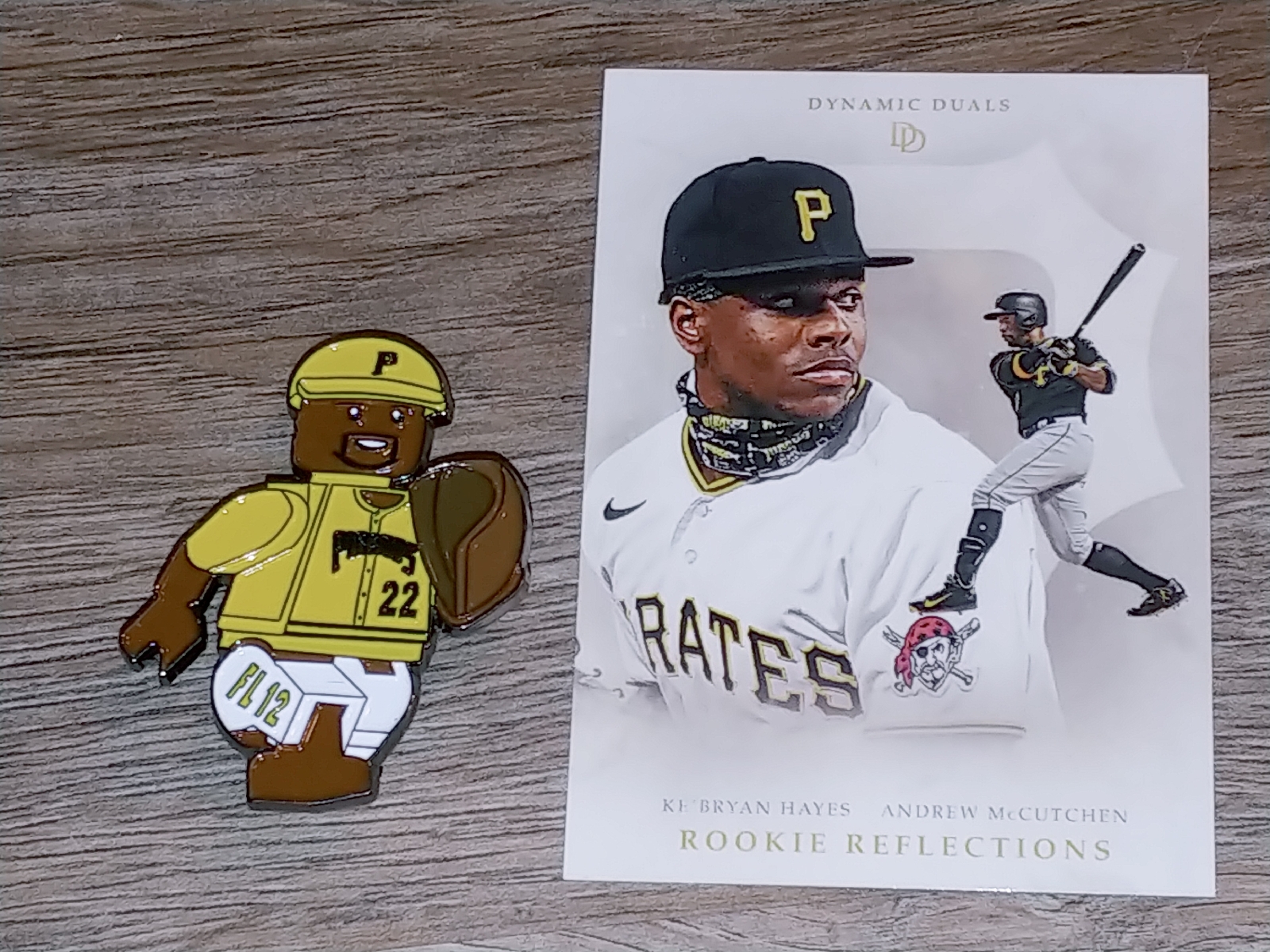 Pretty sweet addition to the Cutch collection and definitely one of the more unique items added.
Did you exchange pins or patches in your little league tournament days?
Did you ever watch the movies or read the books for Hunger Games?
Posted by Collecting Cutch at 1:19 PM 5 comments:

I am so sick and tired of Topps lack of quality control and fact checking on the back of their baseball cards.
If it's for a low end, print on demand product where they have to create the card and get it to the presses within 24 hours, I can almost understand it.
But when you're talking about a product line like Topps Dynasty where the cards are produced with big chunky patches and a nearly $600 per card price tag attached, I expect higher quality control.
Topps Dynasty is a beautiful set with 1 card per box release.  Andrew had only appeared in the 2018 release prior to the most recent 2021 release.
His 2021 release features cards of him in the four uniforms he had played with this far into his career: Pirates, Phillies, Yankees, and Giants.
I set out to get one example of each variation and have gotten the 1/1 for his Yankees card along with images for Phillies and Giants.
I was EXTREMELY disappointed to learn that one of Cutch's most defining moments in his career was being mislead on the back of the card.
The front of the card features a great image of Cutch in his Giants gear, on card autograph, and a large chunky S from the Giants sleeve patch.  It of course is housed inside a One Touch magnetic with the Topps Dynasty sticker holding the case together. 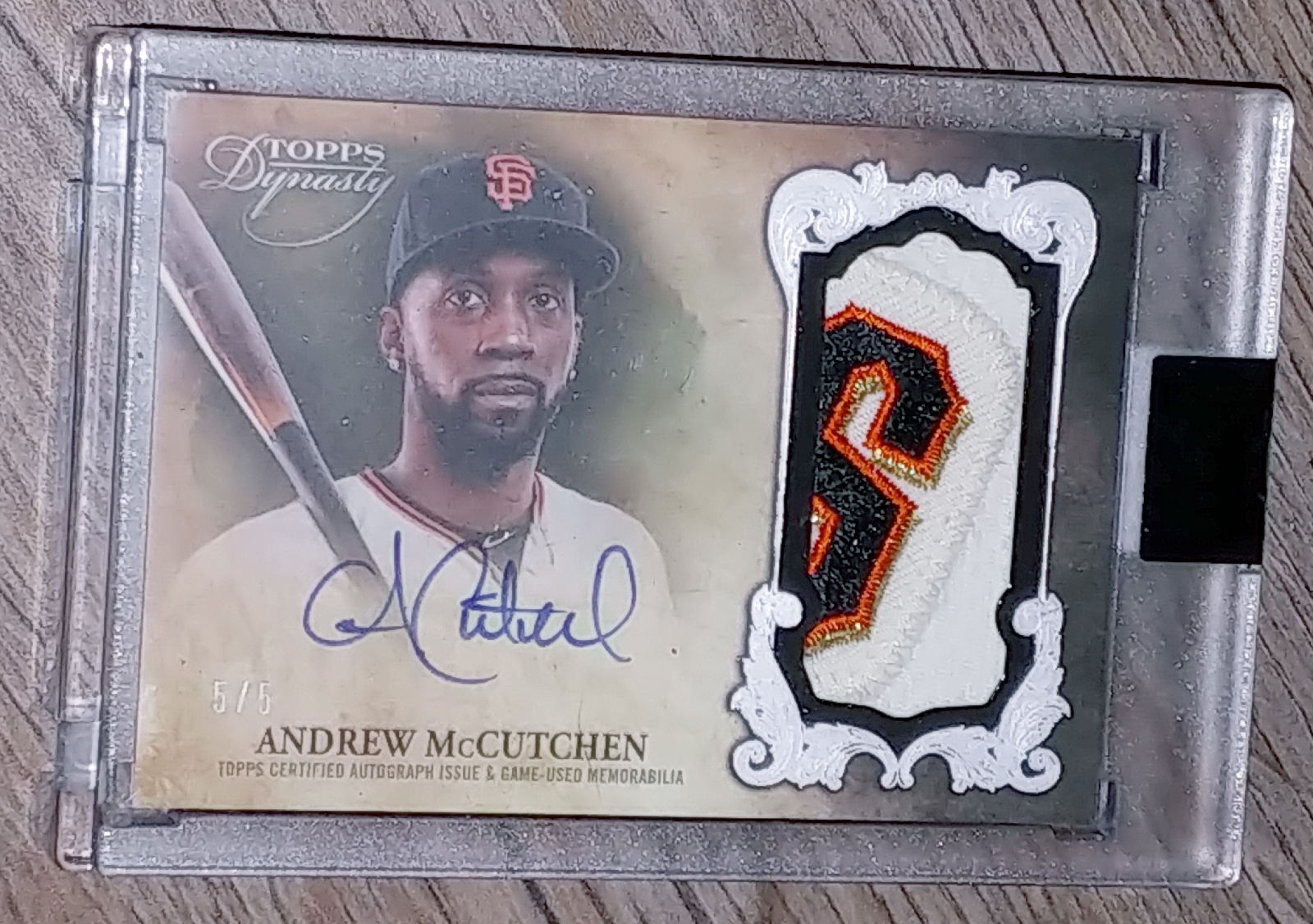 The back, while a nice design, is riddled with errors. 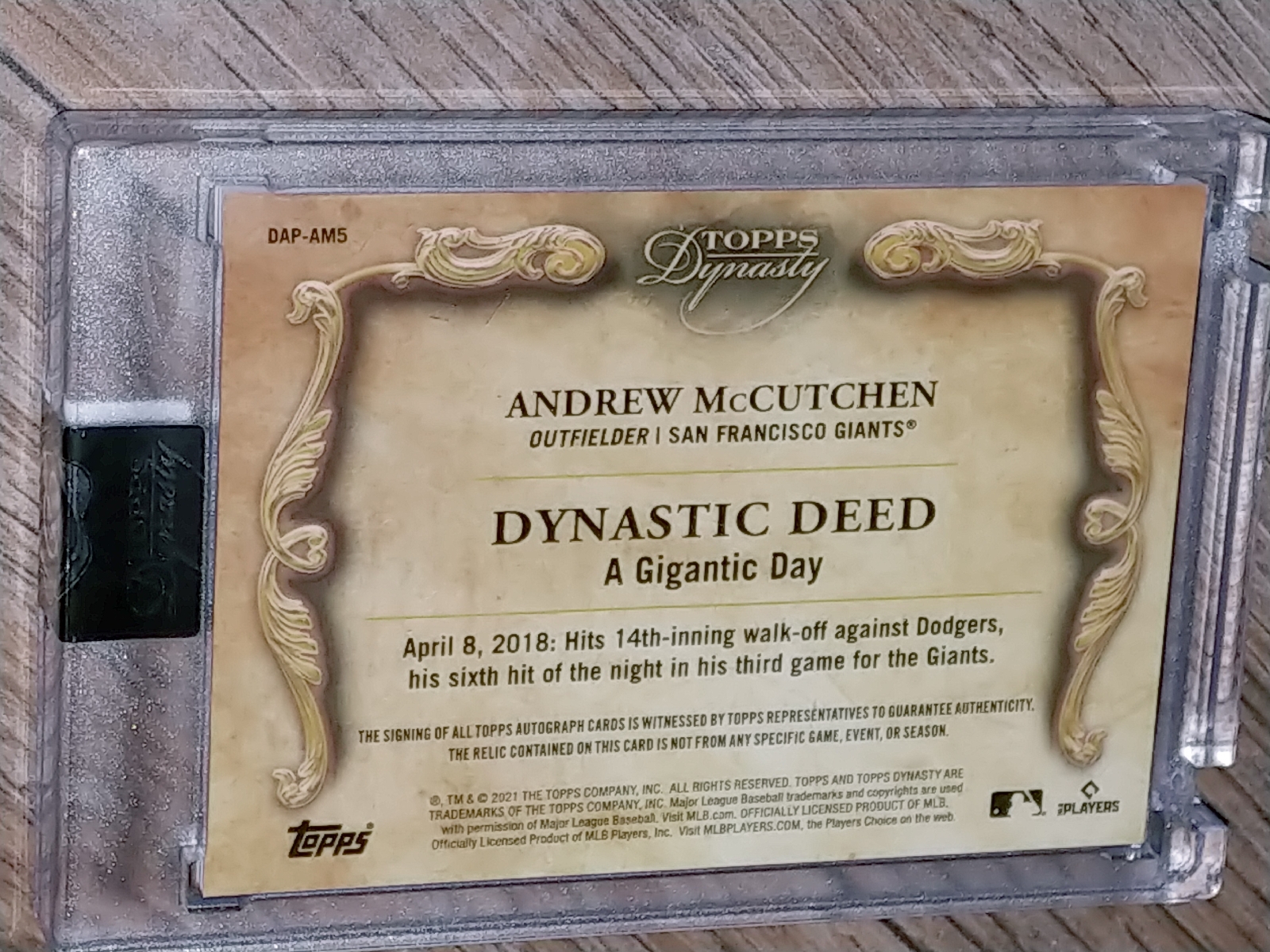 Cutch's "Dynastic Deed" occurred on April 7th, 2018 NOT April 8th.  I know this very well because I have the foul ball that was hit just before his epic walkoff blast.
It makes no mention that the walkoff was a home run.
While still early into his Giants career, it was the 7th game that Cutch wore the black and orange NOT the 3rd.
Do you ever notice inaccurate statements on the backs of baseball cards?  What are some that you've noticed of your favorite players?
Posted by Collecting Cutch at 9:00 AM 6 comments:

Since yesterday was 1/1, I thought it would be appropriate to show off one of my latest 1/1s in the collection and compare the image to another 1/1 that I've had in my collection for a few years. 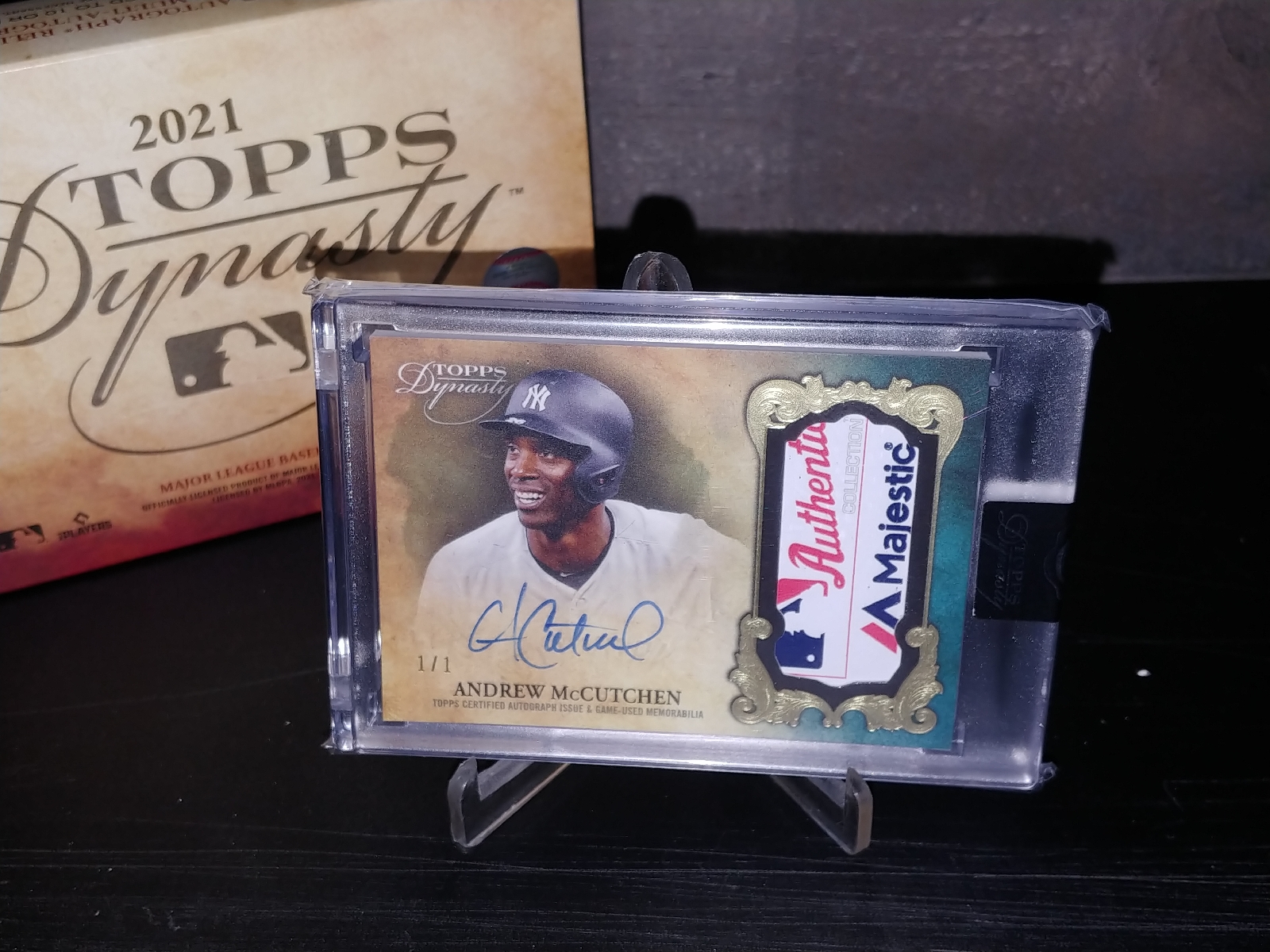 Above is my 4th Yankees 1/1 of Cutch.
It hails from 2021 Topps Dynasty and features Cutch in his clean shaven September 2018 look along with a nice laundry tag patch from the on base machine. 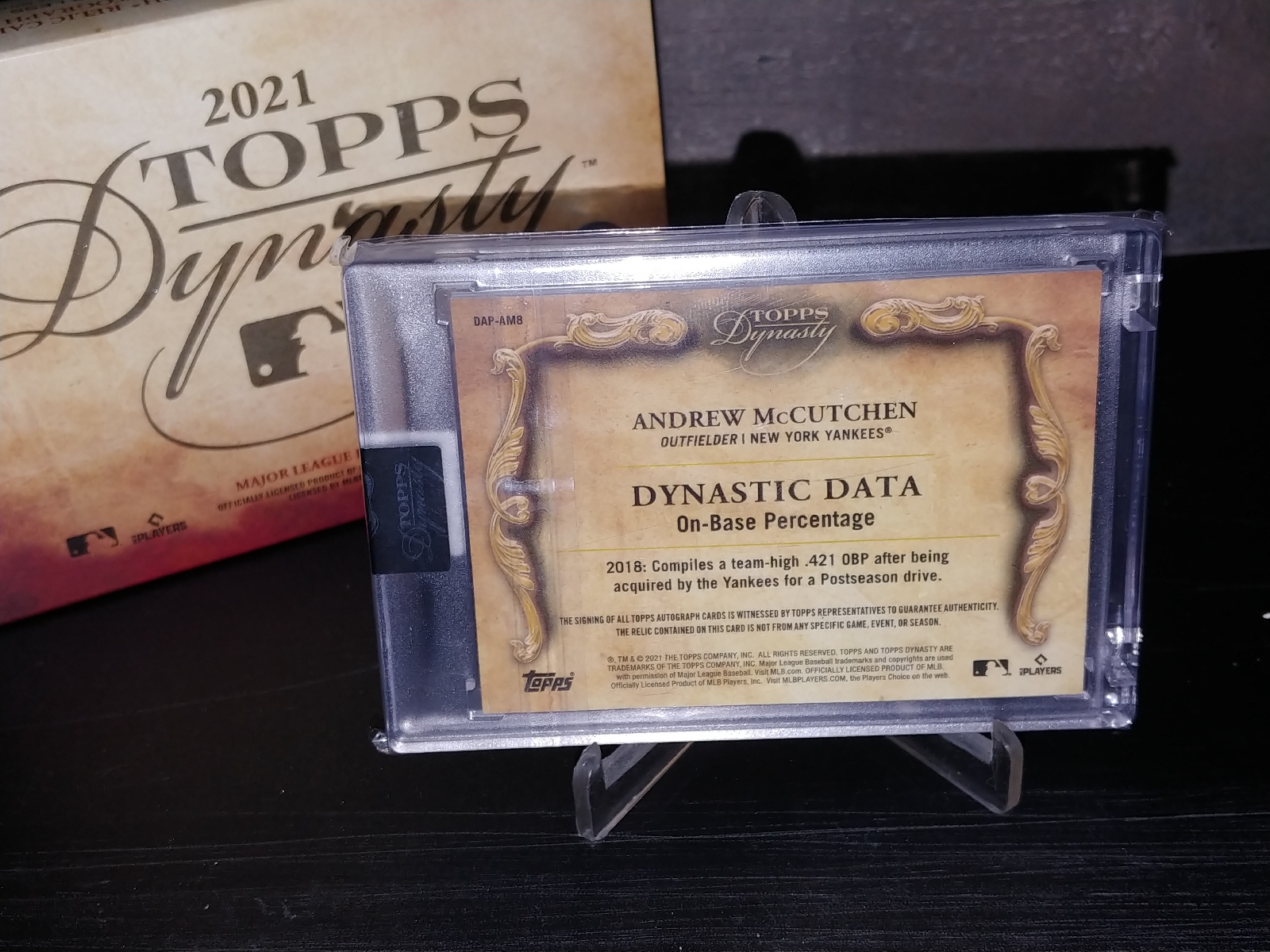 The back discusses how Cutch lead the Yankees in on base percentage (albeit small sample size) in 2018 with a .421 OBP.
The image used for the 2021 Dynasty Yankees card looks a lot like a 2019 Stadium Club card I have. 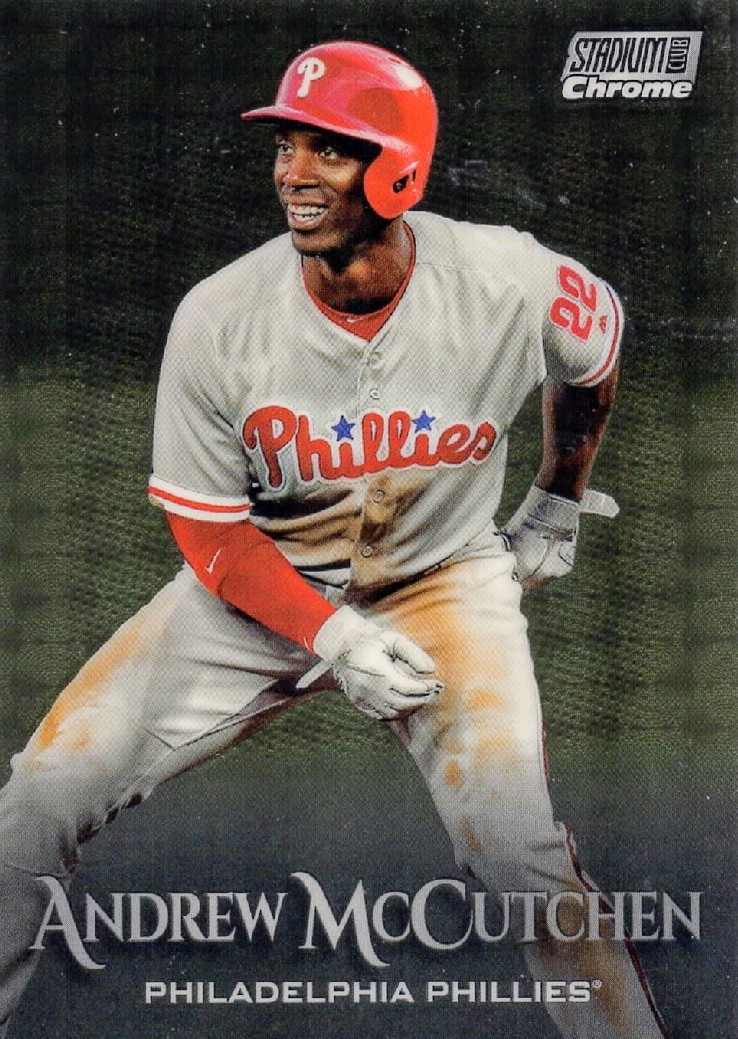 When this card was released I had a feeling it was photoshopped as there were only 30 games in Cutch's career that sported a clean shave look and they were all in New York.  The problem is I cant determine what game this is from. 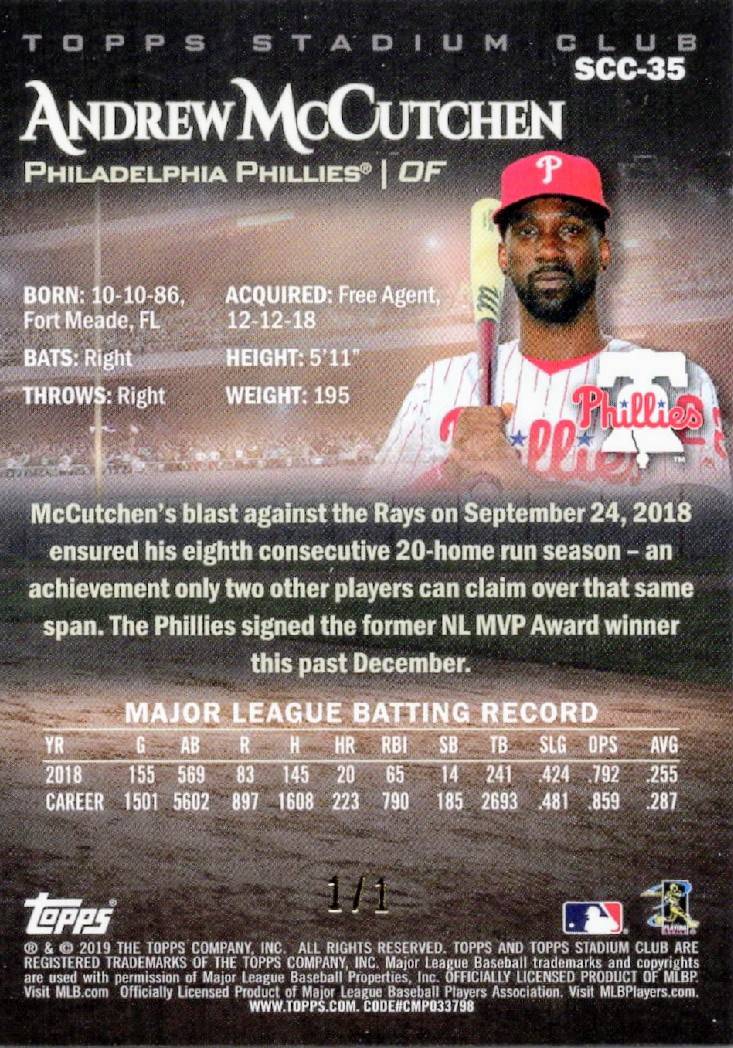 As you can see from the back the Stadium Club Chrome card is a superfractor 1/1.
I have a major problem with Superfractors in Stadium Club because a lot of times the image is a darker image used and the champagne circles used don't look good for Stadium Club cards.  The autograph Superfractor has been on eBay for over a year, but the price is too high.
If anyone is good at reverse image look ups and can identify what game this image was taken from I will give the first correct answer a prize (hint: it's a Hall of Fame autograph and he played on the Phillies).  Please provide source for the image so I can verify that it is in fact from that game.
Posted by Collecting Cutch at 6:08 AM 4 comments: