Let's hop in that Delorean and travel back to August 1st, 2009
The Pittsburgh Pirates hadn't had a winning season record since 1992.
They were hosting the Washington Nationals, who hadn't had a winning season since they left Montreal when they were formally called the Expos.
The Pirates best player was rookie Andrew McCutchen, who the Pirates drafted in 2005 with the 11th overall selection.
The Nationals best player was Ryan Zimmerman, who the Nationals used their first ever franchise selection with the 4th overall selection in the 2005 draft.
Yes the 2005 draft was loaded with future Face of the Franchise players!
The Pirates entered the game 44-58.  This made them the worst team in the very mediocre NL Central.  The Cardinals lead the division with 52 wins entering the day.
The Nationals entered the game at 32-71, nearly 40 games under .500 and the worse team in baseball.
PNC Park packed in 26,855 fans to support the last place Pittsburgh Pirates, excited for the young Pirates that were playing well after the team was gutted at the trade deadline just the day before.
What the fans got to witness was the very first Pirates rookie to home three times in a single game. 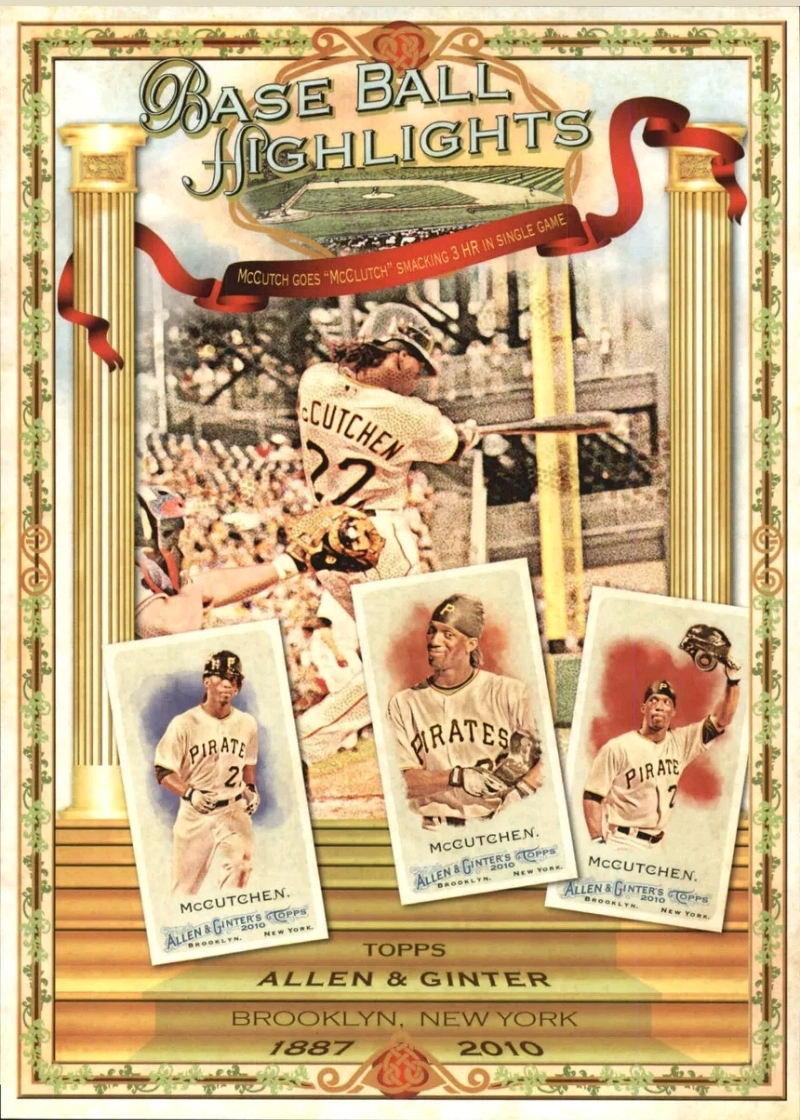 Andrew McCutchen, in less than 50 games had made Pirates history by homering three times in a game versus the Washington Nationals. 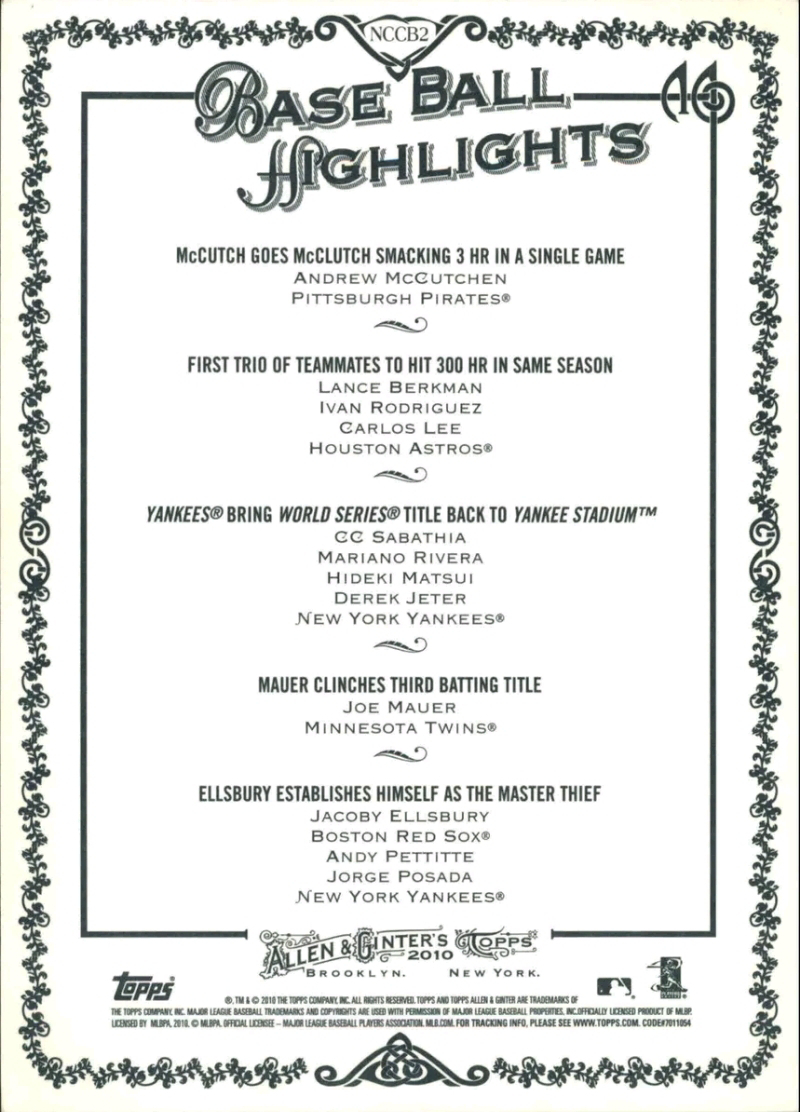 Over the years, there have been a few baseball cards recognizing Cutch's rookie year performance including the oversized 2010 Allen & Ginter cabinet card. 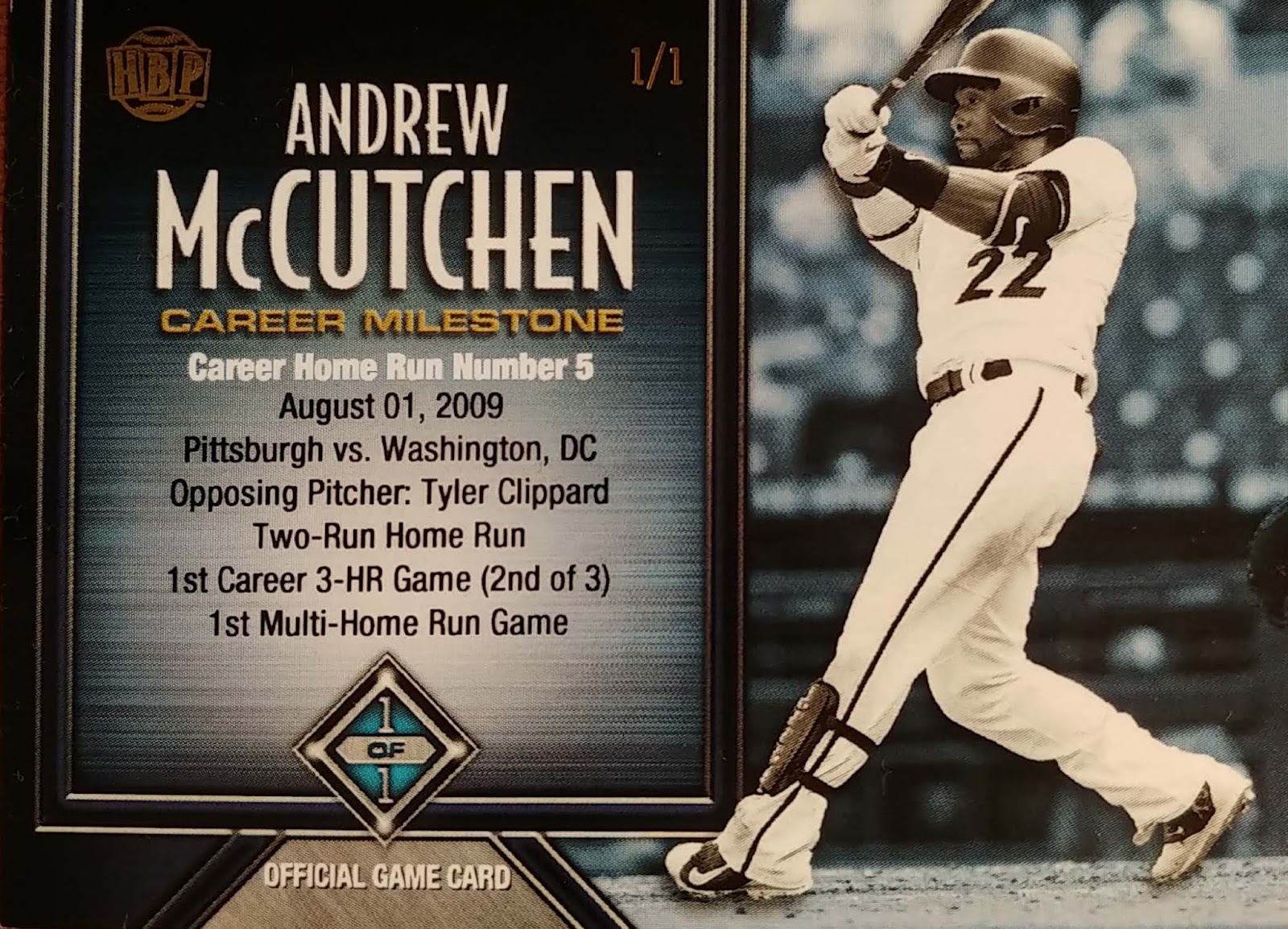 2017 Honus Bonus Partners made a lot of 1/1 cards similar to what Topps Moments & Milestones did.  It took a few players are recognized their home run logs with a 1/1 for each homer.  Above is a card recognizing Cutch's 5th career homerun and his 2nd of the day. 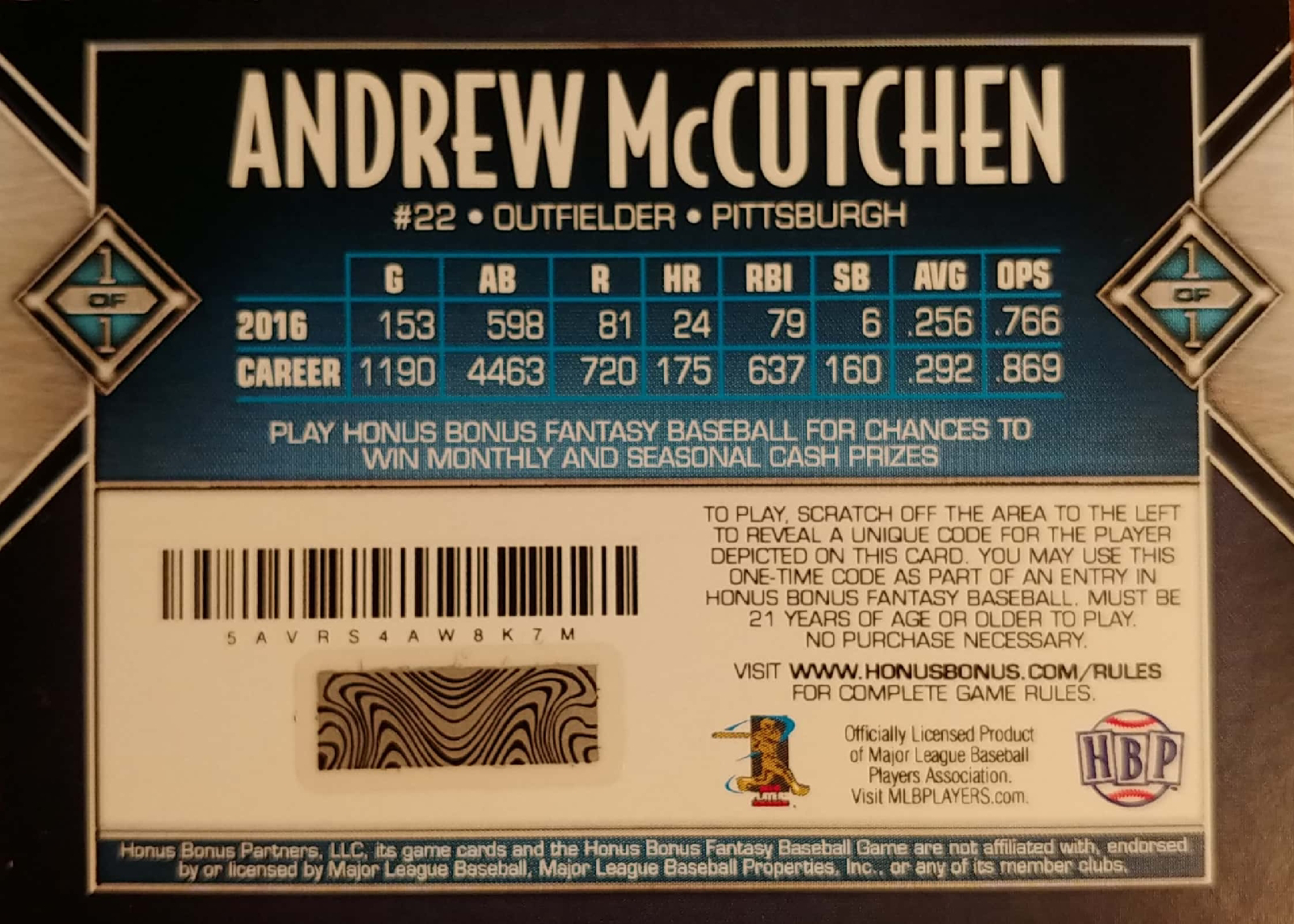 The backs all featured the same backs.
The 2021 Topps Silver Packs feature a retro 1986 design and all have the mojo refractor look 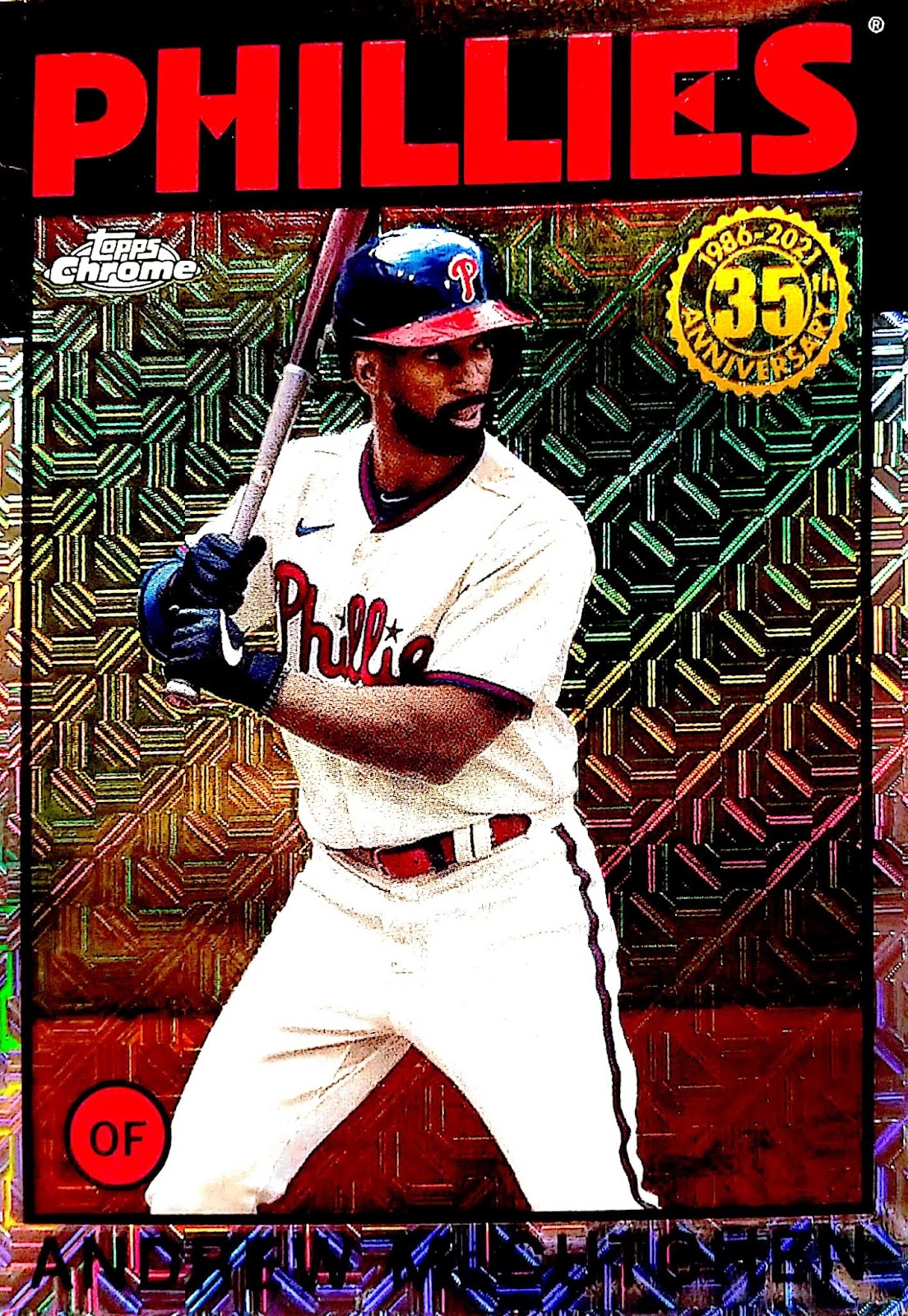 The back of this card notes Cutch's first three Home Run game. 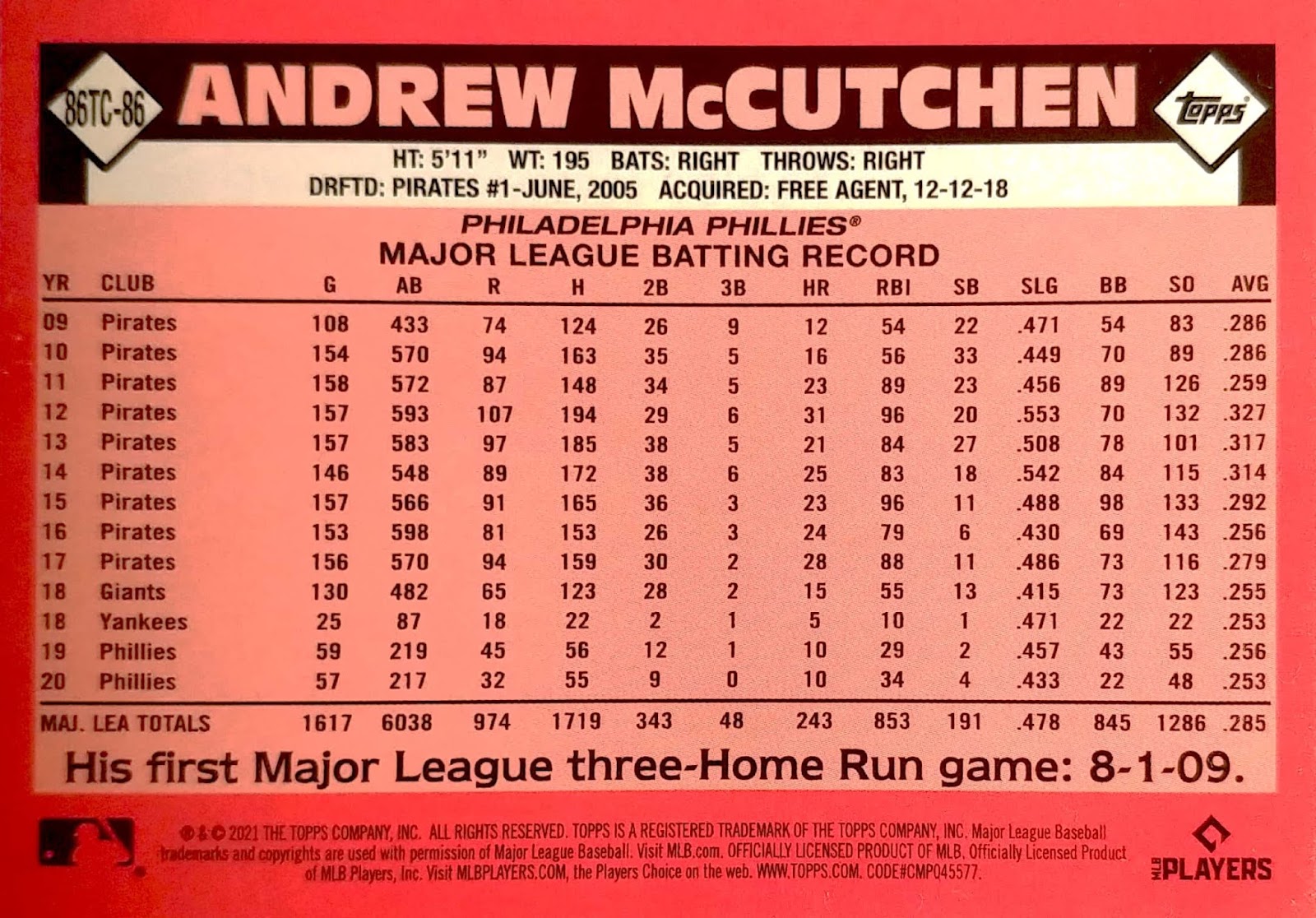 The Pirates are looking for a sweep of the Philadelphia Phillies today.  I would love to see the Phillies not only win today so they can get back in the division race, but Also want to see Cutch launch a few homers into the stands for the fans today.
Posted by Collecting Cutch at 6:10 AM