I held a contest during spring training for people to suggest names for a series of future posts where I look at comparing Cutch to a player mentioned on the back of his baseball cards.

The sleuth aspect of investigating these players made me choose The Cardboard Insider, submitted by Gavin of   Baseball Card Breadown.

Thanks to everyone who participated.  If you haven't already please make sure to enter my current contest. You can see it by clicking here.  A Craig Biggio Topps Dynasy Patch/Auto is the main prize, but everyone who enters will receive some autos, relics, parallels, etc.

Back to The Cardboard Insider.... 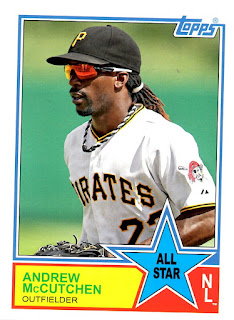 The back of the card features (drumroll please)
Steve Garvey 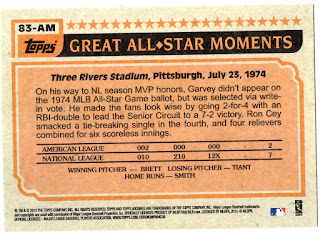 Steve Garvey is an absolute fan favorite in every sense of the word.  There's even a few bloggers who PC him as one of their main guys.  It's no wonder why fans liked him.  He was elite for his time in the majors.  A 10 time All-Star, MVP, 4x Gold Glove winner and World Series Champion, Garvey deserves some Hall of Fame discussion.

Even with all his hardware and career accomplishments, Garvey never even reached 50% of the required 75% vote.  His highest was 42.6% in 1995.

Garvey's career WAR over 19 seasons was 37.7 according to Baseball-Reference.com
To put that into perspective, Cutch has the same WAR in only 8 seasons (I''m not counting 2017 since it just started).

Actor and Late Night Host Jimmy Kimmel wrote an excellent article for ESPN a few years back that if you are a fan of the National League's Iron Man you should check out here.

The All-Star voting has begun.  If you haven't already cast your ballots, please vote for Cutch.  I know his stats don't scream early season All-Star, but I would love to add more All-Star cardboard of him to the collection.

Posted by Collecting Cutch at 11:44 AM