Players I could never root for: Carlos Gomez

We all have that list of baseball players you just hate and can't stand.

It could be a moment where the player did something monumental in an important game to eliminate your team from reaching the Post Season.  I can't imagine too many Phillies fans wanting Joe Carter to come to Philadelphia.

It could be the way a player constantly upstages an entire team.  Jose Bautista will never be accepted by the Orioles fans.

It could be the way a player just destroys a division rival team because of his pure talent.  Paul Goldschmidt uses Giants pitchers as if they are throwing batting practice to him.

Or in my case it could be all of the above.

I hate Carlos Gomez.  Truly hate him as a player. 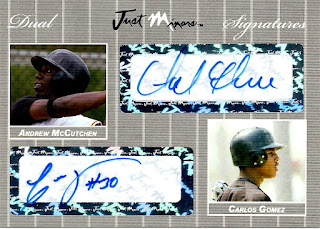 I get sick and tired of watching him pimp homeruns in meaningless games in April.  I hate that he swings the bat so hard he sometimes falls down and his helmet falls off.  I hate that whenever there was bad blood between the Pirates and Brewers he was always at the forefront of those battles instigating skirmishes on the field. 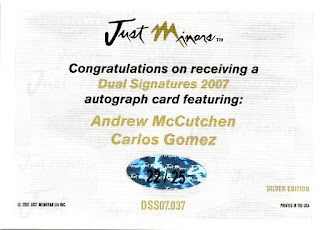 I truly hate Carlos Gomez as a player.
And yet I couldn't pass up this dual autograph from Just Minors numbered to Cutch's jersey number (22) for under $25.
Posted by Collecting Cutch at 11:13 AM