Who's steering the ship?

I have trusted Neal Huntington since he took over a team with nearly two decades long of losing in addition to one of the worse farm systems in the league. He had a five year plan to get the Pirates relevant and in 2013 they were.

It was largely due in part though to one of the most exciting players in the game emerging as a consensus top 5 talent.

That player was Andrew McCutchen.

I have changed my cardboard collection to strongly emphasis becoming a super collector of Cutch over the past year.

Without question he is my favorite player of the past two decades.

He wants to stay a Pirate for his entire career. 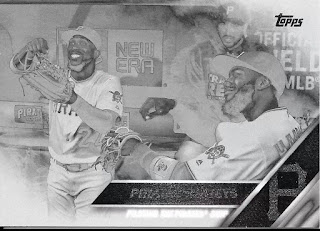 The question will be, if he bounces back to his MVP numbers and the Pirates are within contention, what would GM Neal do?  I guess if both those things are in place, it will be a great season for the Buccos and Cutch.

I was very happy to add the Black and White "Negative" version of the Pirates' Mateys card featuring Cutch and JHay. Even when the team is struggling and losing, these guys know how to have fun.

Here's the regular version and card back. 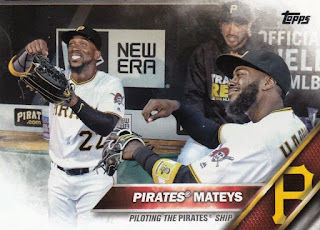 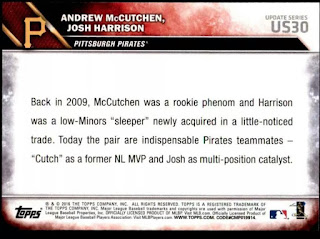 On a side note I have a game used Josh Harrison Bible armband similar to the one he is wearing in the picture.

Posted by Collecting Cutch at 8:39 PM