A few days ago Gavin made a comment about Duck Tales having a super catchy theme song.
I loved Duck Tales growing up.  I remember playing the game on my NES, seeing the movie with my grandmother, and Donald Duck being the first character I got an autograph from at my first trip to Disney World.
Duck Tales ruled!
The intro may actually be one of the best cartoon intros of all time in terms of fans.
There have been countless numbers of people to cover it including
Andrew Huang covering it in 10 different genres (here)
Panic at Disco!'s frontman Brendan Urie putting his own spin on it for the Jimmy Fallon show (here)
I've heard it covered in multiple languages and styles and it still kicks ass! (here)
Duck Tales is the story of Donald Duck's nephews (Huey, Duey, and Louie) and their adventures with Uncle Scrooge in Duckburgh.  They go on Indiana Jones style adventures each day.
Duck Tales debuted in 1987 and it was the flagship show for Afternoon Disney that ran for 4 years on syndication.  The success of Duck Tales lead to other shows like Tale Spin, Chip n Dale's Rescue Rangers, and Darkwing Duck.
I remember getting home from grade school and hearing that theme song come on and immediately dancing like a duck and having a good time.
I already mentioned that Duck Tales was the first movie that my grandmother took me to see.  She passed away over 8 years ago and I miss her terribly.
I really like doing these 80s week cards every year because it reminds me of much happier and carefree times.  Adulting is not nearly as fun as dancing like a duck or singing Duck Tales with grandparents or collecting 1987 Topps baseball cards with my dad.
Thank you for following along on this week of 80s posts as I turn another year older today.
Here are my Cutch cards based on the 1987 design (one of my all time favorite designs and the first set I ever completed). 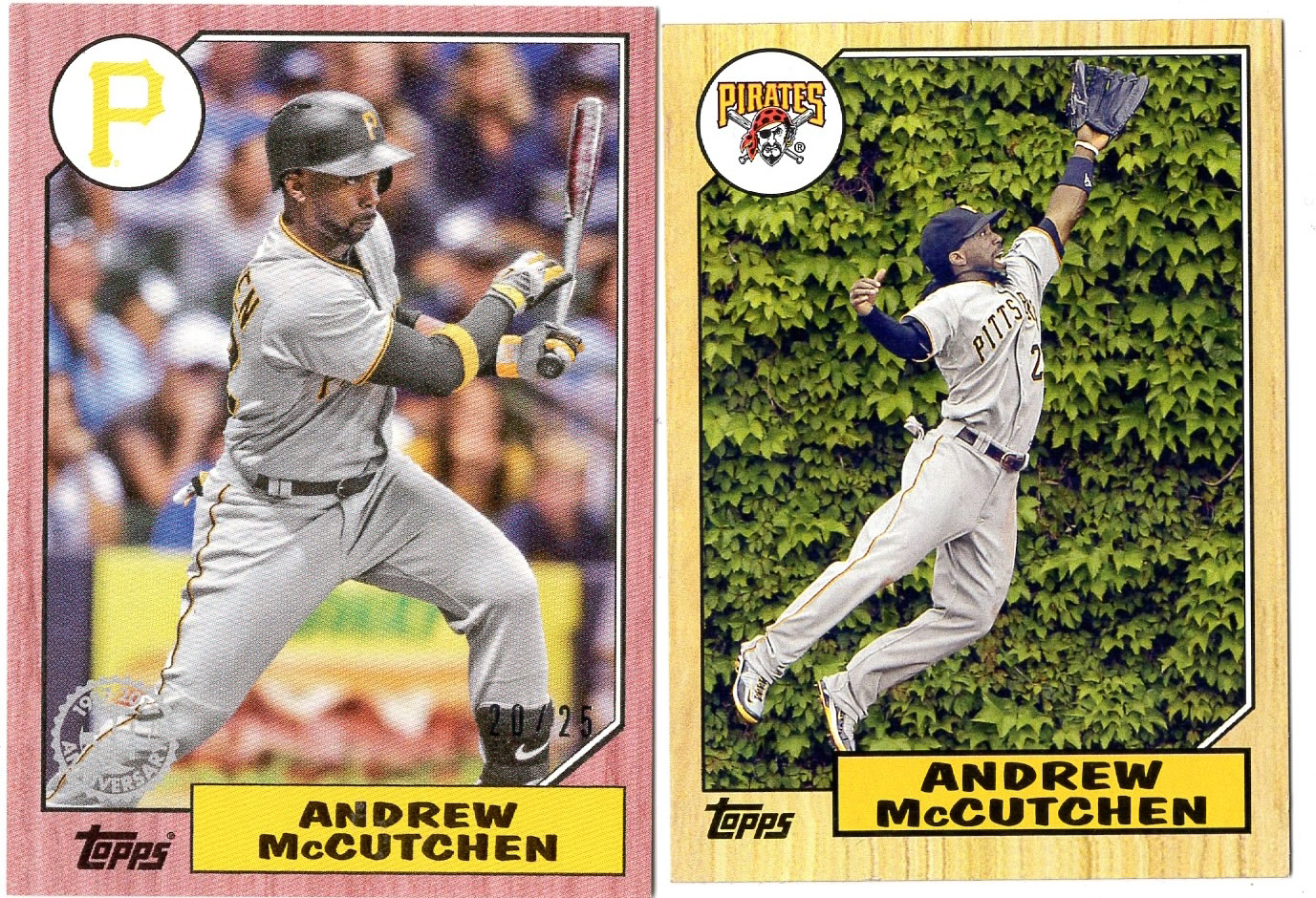 Above are the two minis I have of Cutch using the 1987 design.  They include a 2017 Topps Mini 1987 Cherry Wood parallel (numbered to only 25 copies and to be featured again next month for October) and the 2012 Topps Mini 1987 throwback insert set. 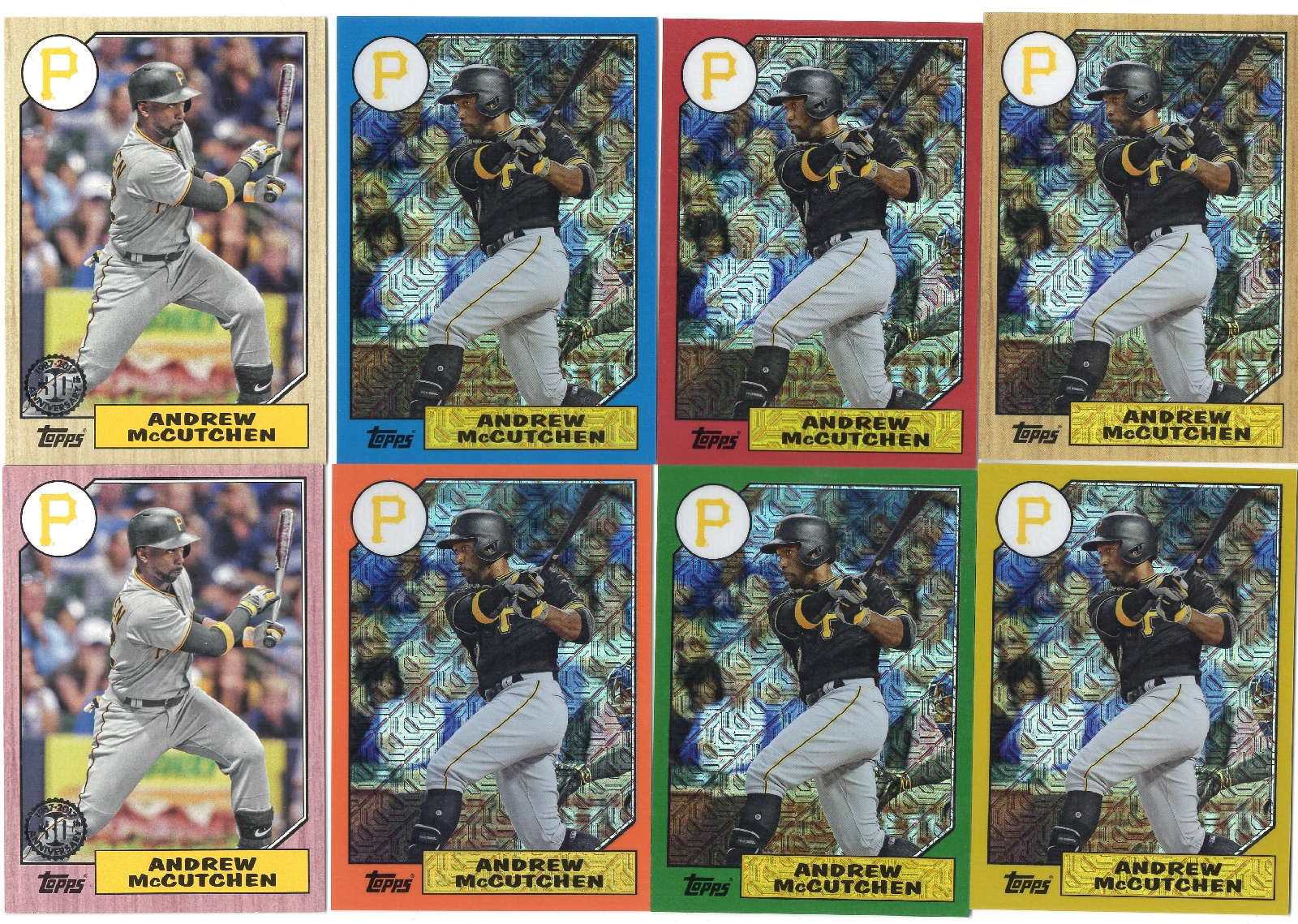 Above are cards from 2017 celebrating the 30th anniversary of the 1987 set.  I have the base and red wood parallels from the main flagship set along with the 6 main color mojo parallels from the "Silver Packs" found at Hobby stores as part of their Hobby Community Program.  The only way to get those silver packs was to purchase a disclosed amount of Topps packs which could then be redeemed at your local hobby shop for packs containing a few of these 1987 throwback cards. 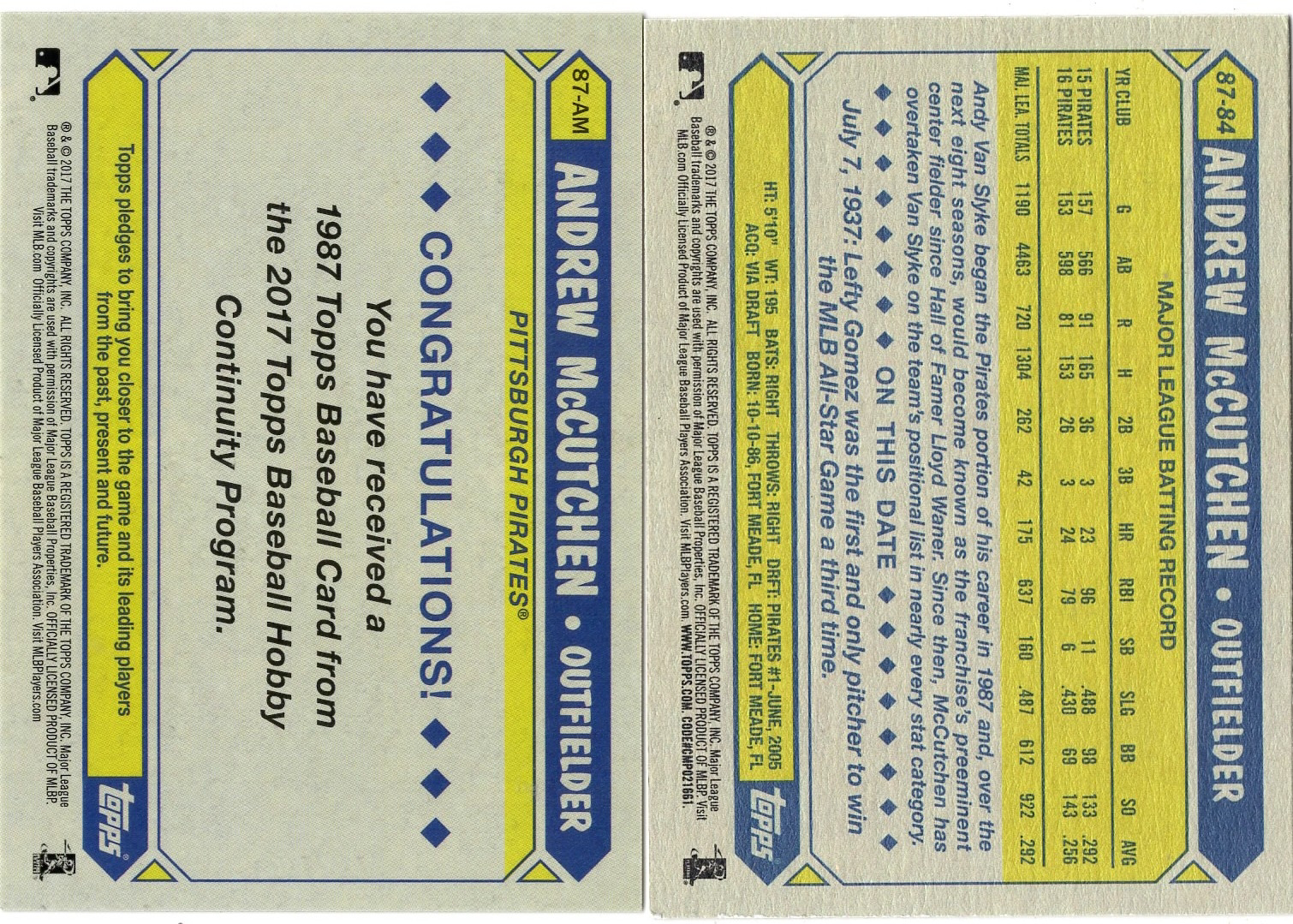 Above are the backs for the 2017 cards commemorating the 30th anniversary of 1987 Topps. 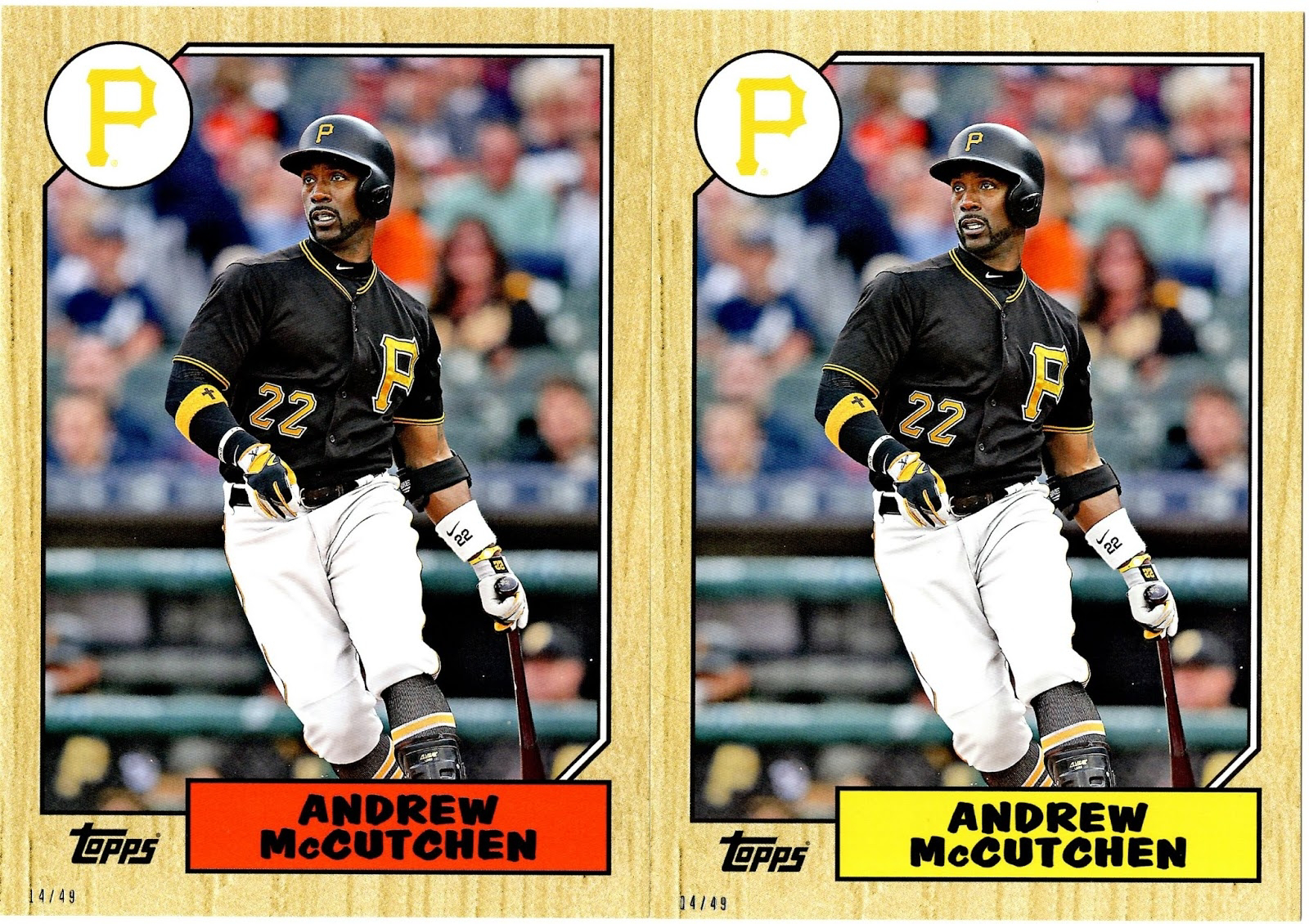 These 5x7 cards are a unique situation where Topps didn't announce color parallels, but did in fact color a few cards differently with the same print run number.  Both of these, the orange and yellow name parallels are numbered 14/49. 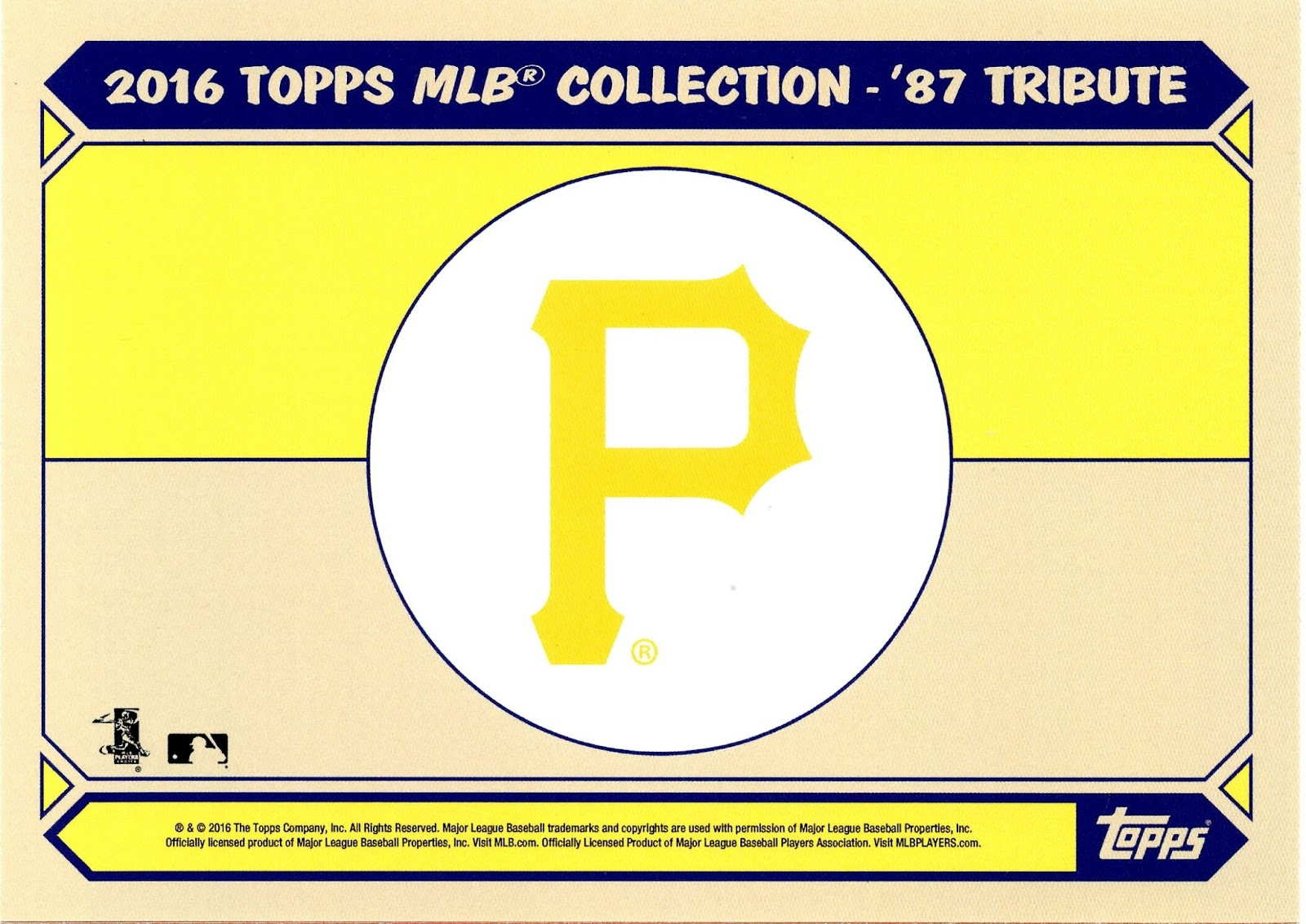 They were released in 2016 and don't celebrate an anniversary for 1987 at all, just a random oversized tribute to an iconic set.
So there are my 1987 Cutch cards and my Duck Tales stories.
And this is a giant rubber duck that took a tour of Pittsburgh in 2013.  I saw it, but unfortunately all my pictures were taken with a digital camera and I no longer have the computer that everything was saved on.  Thanks Google for this awesome image! 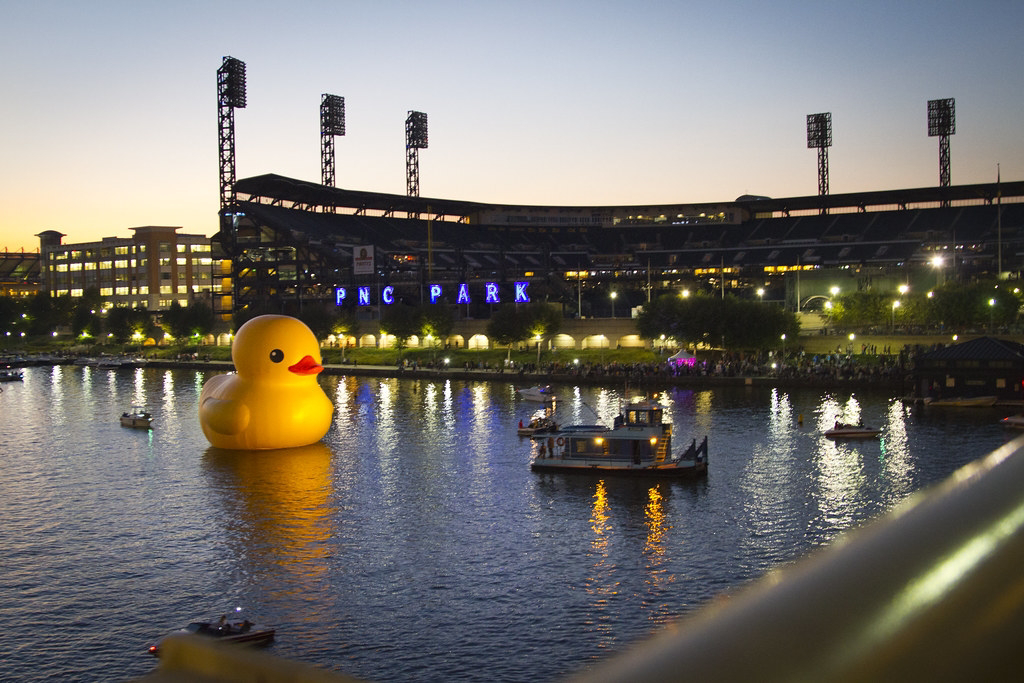 Posted by Collecting Cutch at 4:55 PM