Hoping for a New Era of Fun

Pirates have been bad this year.
That may be an understatement actually.  They're 21 games under .500 through 51 games.  With a record of 15-36 they have a winning percentage of .294.  Extend that winning percentage out to a 162 game season and the team would lose 115 games.
Losing isn't fun, but if some key pieces are in place in the farm system, you can almost accept it.
The problem is, there's not a lot already in place and the personalities on this team aren't even fun.  Besides Trevor Williams and Cole Tucker, many of the members seem to be introverts and not very outgoing.
I'm exvited for the new era of Pirates baseball to start and hope that names like Hayes, O'Neil, Gonzalez, Reynolds, Cederlind, and Priester can match the names and excitement that McCutchen, Walker, Alvarez, Cole, Morton, and Burnett brought.
Maybe Mason Martin becomes the next Pete Alonso and maybe O'Neil Cruz becomes Corey Seager.
I just want some fun again!!!! 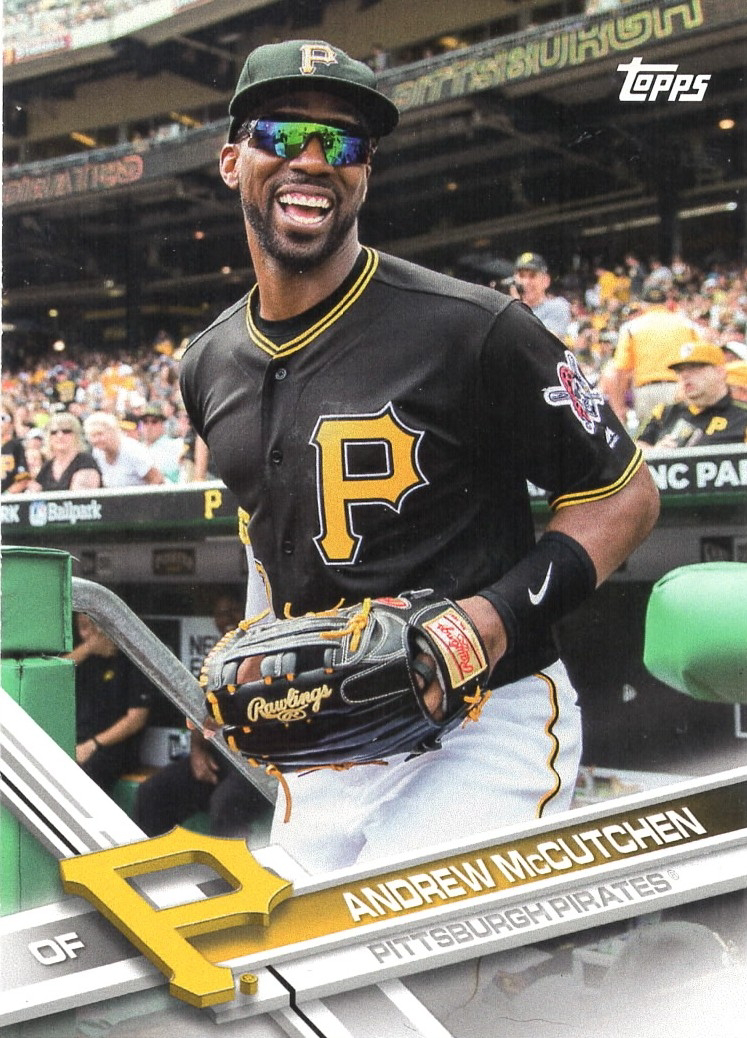 This 2017 Lids exclusive Topps card was available for purchasing a New Era hat at Lids.  The card captures a jovial image of Cutch coming out of the dugout. 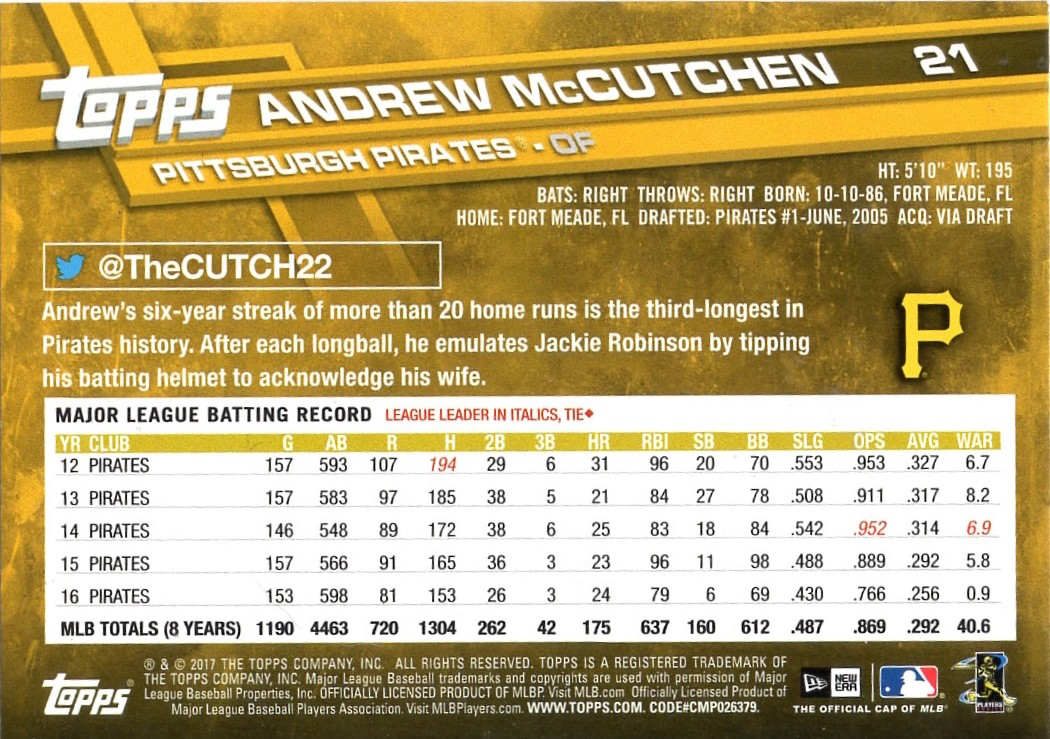 Oddballs like these and the Utz cards of 2019 and 2020 are fun.
I wish there were more fun cards like this today like at McDonald's or Wendy's or Buffalo Wild Wings.
At least we have a few sets from Lids and Utz though.
There was also a 2016 New Era relic that Cutch appeared on and these are EXTREMELY DIFFICULT to find. 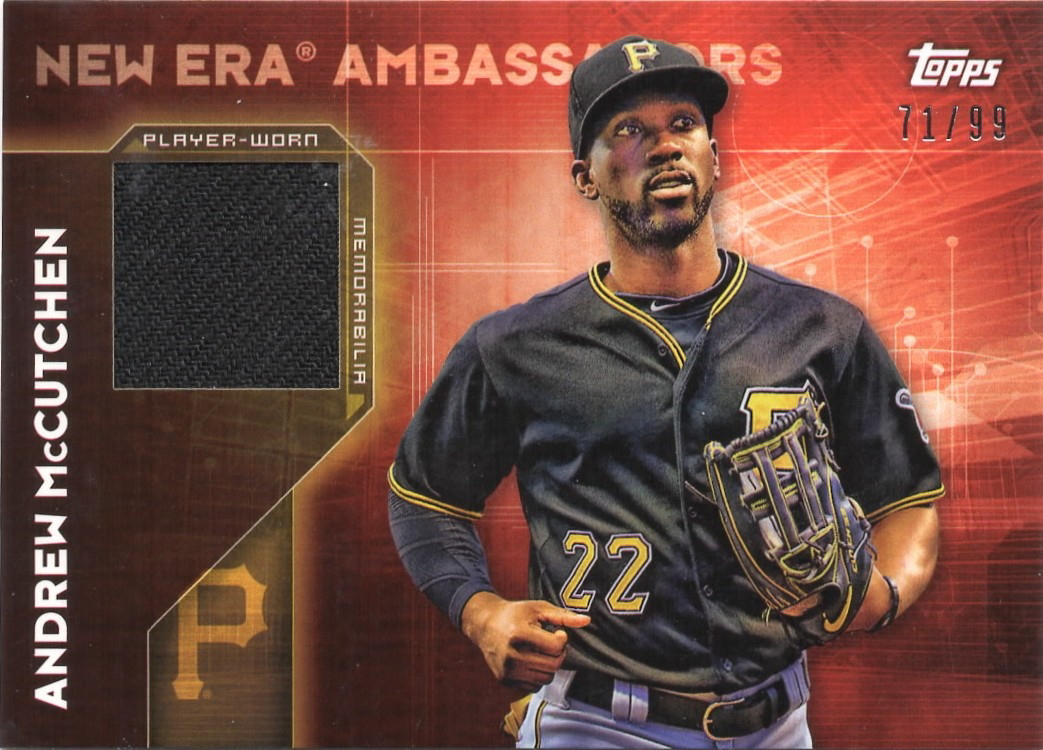 These cards have New Era listed more boldly on the card are are numbered to only 99 copies. 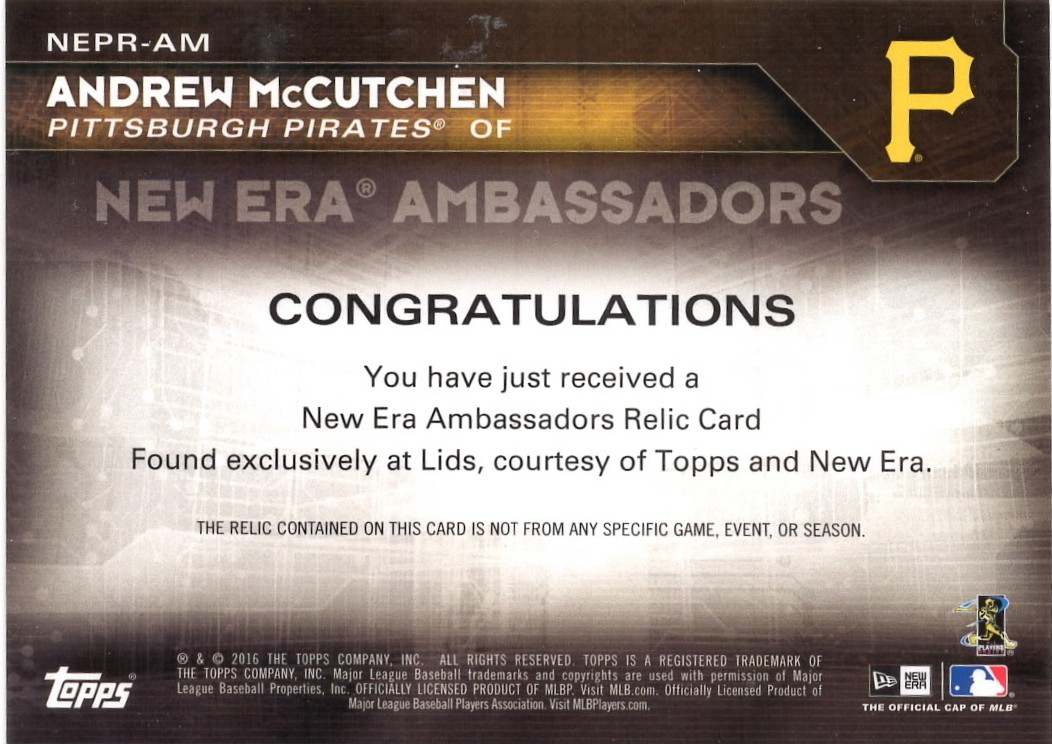 The back of the card also talks about how they are found exclusively at Lids stores and made courtesy by Topps and New Era teaming up.  A quick search of eBay shows not only are there no McCutchen relics, but NO relics of any players found on the checklist.
Posted by Collecting Cutch at 6:26 PM