It is the 8th inning of the 2018 All Star Game and here are some things I am coming away with.

I miss seeing Cutch appear in all star games. 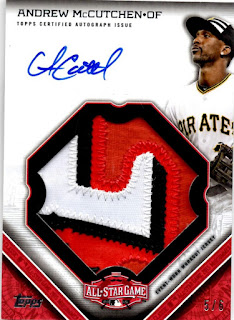 Charlie Morton, born in my hometown, is in line for the win.

I still don't like the Brewers players.  Yelich loses ball in lights allowing a hit off Pirates closer Felipe Vazquez.  Then Yelich redeems himself by homering off my other PC player Charlie Morton.  National League is losing to the American League because of a Brewers pitcher giving up a 3 run homer to a former Brewers player.

It is good to see Shin Soo Choo continue his on base streak in an exhibition game.

Trout is a freak when on the national spotlight.


The card pictured above is my only autographed card of Cutch in an All Star uniform.  It is from 2015 Update and is numbered 5/6.  It has a massive patch containing the "L" in National.

If Cutch doesn't appear in another ASG, his last at bat was a Homerun.
Posted by Collecting Cutch at 11:21 PM