The 2013 Pittsburgh Pirates was my favorite team I rooted for. (EVER!!!)

They would go on to have their 1st winning season in 20 years.

The bullpen lead by Jason Grilli was dubbed the Shark Tank.  Grilli would even go as far to get the team a shark tank for the clubhouse.  They began to use a 3 headed back of bullpen (Watson-Melancon-Grilli) in the same way that many teams are using bullpens today.

Look up the ERAs of the core members of the Shark Tank in 2013 and you will see that when there was blood in the water, these sharks fed like a frenzy.

Yesterday I used a bible quote involving the fish in the sea trembling at His presence.

For the rest of this week I will look at some cardboard featuring Cutch with members of The Shark Tank and why batters trembled in their presence. 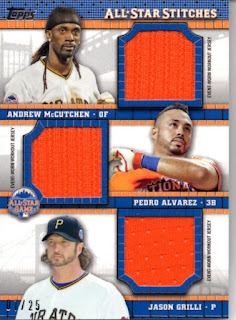 Let's begin with the mastermind behind the Shark Tank, Jason Grilli.  Nicknamed Grill Cheese he would lead the Pirates into the All Star game with over 20 consecutive saves converted.  He lead the NL in saves at the break and even was the cover athlete for Sports Illustrated highlighting the Pirates miraculous season. 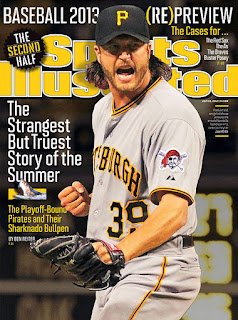 Shortly after the SI article, Grilli would land on the DL (thanks Sports Illustrated curse) and hand the reigns of the closing role to Mark "The Shark" Melancon.

Posted by Collecting Cutch at 10:10 AM