I won't always be showing off cards of Cutch with inscriptions as I only have about 5 of them if memory serves correctly. 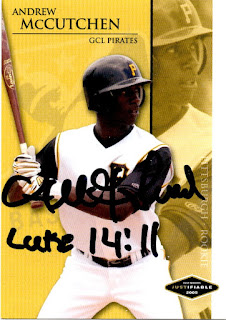 This 2005 Just Minors card featuring Cutch in his Gulf Coast League Pirates uniform features an on card autograph with an inscription Luke 14:11 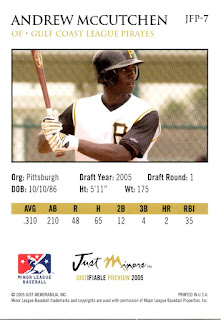 This verse holds meaning to me in many ways.  In my job I often give credit to others and recognize the team effort rather than taking credit for my own actions in the success of the team.  A good example of this is that we have a new department manager who is our youngest dept mgr in our company and he has taken on a strong desire to learn and be successful through me.  He has approached me several times in trying to make his Gross Profit and Net Income of dept better.  I gave him a few suggestions and it has paid massive dividends.  My supervisor came to me thanking me for the time I spent with him and making the store operations better because of his success.  Rather than own it and say "Yeah. I am the best and can make anyone successful" I simply said "Collin is the future of our company. He has a strong desire to learn. All I did was offer some suggestions. He is the one that executed it ... and did it brillaintly".

It's important to stay humble in our lives.
Posted by Collecting Cutch at 12:35 PM