It's hard to believe the year is half over already.

As we head towards the second half of this year, I have begun planning some "events" that I want to do this year.

Let's begin with what the main BIG event will be this year...because of the amount of interaction I got last year and when I previously did it on PiratesTreasureRoom, I will be doing my annual Save The Boobies October Breast Cancer Awareness event. This event will hopefully take place during the entire month of October again.  It will be returning with more Cutch pink cards to showoff, recap last year's cards in one post, and do some Cutch cameo pink cards.  I have been planning some of these posts since last year.

I am planning on attending the AA Minor League All Star Game in Trenton on July 12th and will showcase only minor league cards of Cutch during that week while looking at how his stats in the minors rank with current prospects ascending to the show.

Following the minor league All Star Game I will switch gears and look at Cutch's 5 year stretch of consecutive All Star Games from 2011 to 2015.  I will also look at the two years he got the "snubbed" treatment in 2010 and 2017 and compare them to other ASG representives.

After October I will show off cards I have of Cutch that pair him with top free agents like Machado, Harper, Donaldson, etc.  I will also run a contest for you to predict the team and years Cutch signs with this year.

December will feature a 12 days of Christmas series as I countdown to Christmas using only cards marked 12/25.  I know Gavin should be a big fan of this.

After Christmas I will be in full on review mode for the year.  I will be reviewing my favorite sets, hits, Cutch's performance, and any cards I picked up this year from previous year's releases.

If there is any content you would like me to show off hit me up.  I have over 2,300 cards to choose from so I am sure I can come up with something.

Because New Jersey is going to be over 100 degrees today and I would much rather it be cooler fall like temperatures, I am going to show a Christmas card...In July.

This is what you can expect to see for the 12 Days of Christmas segment, a nice card numbered 12/25.

I thought I would show off this 2014 Stadium Club Field Access Rainbow Foil first since the 2018 Stadium Club just released this week. 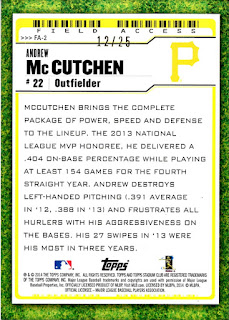 I have often complained about Topps not using the best photos of Cutch for Stadium Club.  This entry is actually a unique look into the dugout as Cutch is heading to the field. 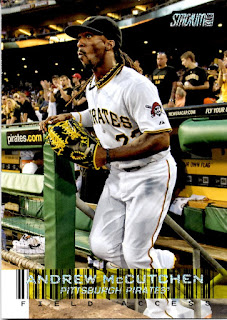 The look of these cards was meant to resemble a bar code to grant you "field access".  This particular one is glistening with the rainbow foil that makes this rare card fall once in a case.


The dog days of July, August, and September are upon us. Give me some inspiration what to write about.

Posted by Collecting Cutch at 7:41 AM