This Day in Cutchstory: A Day Late, A Buc Short

I made the mistake of not showing this off yesterday as part of my This Day In Cutchstory.

Now because I forgot to mention yesterday that Cutch hit a HR on that date in 2014 (as evidenced by the card below), I will instead focus on his July 6th 2014 performance where Cutch went 2 for 4 at the plate with a triple and RBI.  Following that game, Cutch raised his average to .324.

The Pirates completed a sweep of their state rivals and rose to 6 games over .500 while the Phillies further sunk to 14 games below .500. 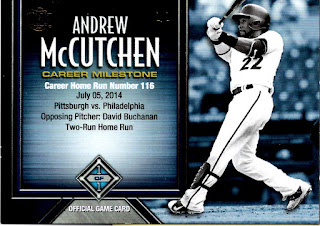 These career milestone cards are similar to the Moments and Milestones impossible sets that Topps made a few years ago.  As someone who missed out on the chaos of the M&M set, I like that the concept was reinstated in the form of these cheap 1/1s for the game's top players.

Unfortunately Honus Bonus Partners never really took off so there's probably a bunch of these still sealed in boxes at a warehouse.  I have been able to get a bunch of them for under $10 so hopefully as more become available they can find their way into my collection.

The McCutchenless Pirates are facing one of the best teams in baseball this weekend, the Philadelphia Phillies.  Earlier in the year the Pirates were swept in a four game road trip to Philadelphia.  Hopefully they can start winning some games again soon.  I would love to see some winning baseball in the Steel City.  2013 to 2015 seems so far removed from the current roster.  Only 5 players on the 2015 roster are still with the Pirates (Josh Harrison, Starling Marte, Gregory Polanco, Francisco Cervelli, and Jordy Mercer).  Only 3 of them played in that series against the Pbillies 4 years ago.  Cervelli is a free agent at the end of the year so it is likely that another fan favorite will leave Pittsburgh for greener pastures.

Bring back the wins in the Steel City!

Email ThisBlogThis!Share to TwitterShare to FacebookShare to Pinterest
Labels: 1 of 1, 1/1, Honus bonus partners, This day in Cutchstory