Today is my dad's birthday.  He will be 59 years old today and has lived an amazing life albeit a small and humble one.  Never to do anything famous or travel the world or anything of that magnitude, he has always kept his roots at home...where his heart is.  I love him for that and respect him for that.  He is currently living in a house on a road that he grew up in.  He's incredible in every sense of the word.  I know I have told stories of how much he has influenced my life, but here is one more.

Back when I was a teenager, I was involved in several bands ranging from punk to metal to nu-metal (rap/hardcore/metal). We would play a bunch of small gigs as favors to one of my friends as a way to make extra money.  There was a local firehouse who would rent out their space to us and we would pack it FULL!!!  Well, one night some fans got a little reckless and in the middle of the set someone punched a hole while the mosh pit and crowd surfing got out of hand.

My band, myself, and my friend who was promoting the show were like WTF!!!????

My dad is a painter/wallpaper hanger and does some general small contracting stuff.  At around 11:30pm I called him up telling him what happened and how we would likely lose the venue as a place for future shows if we couldn't fix it.  He said not to worry and that he would swing by in the morning and fix it up.

I told my buddy Richie who was the promoter to let the fire chief know we would have it fixed in the morning.

After a 1am diner run (New Jersey is known for their 24 hour diners) we finally went to my friend Kyle's house and crashed for a few hours.  At around 9am my bandmates, myself, Kyle, Richie, and Mel all got up and went to the firehouse to meet my dad for 10am when he said he would be there.

He was already there in his work van ready to get to work.

My dad hated the music we played, but loved the message as we were a positive youth hardcore/punk band.  He greeted all my friends most of whom had tattoos and piercings and crazy colored hair.  He offered us doughnuts that he picked up on the way then proceeded to get to work.

Once inside he kept insisting that "you kids don't need to stay here and watch me do this. Go to the mall or something."

What's funny is that even though we were all 17 to 22 years old we wanted to hang out with the old balding dude and watch him gut the wall, spackle it up, expediate drying it, and eventually paint it.  We wanted to hear stories of how he would ride his dirt bike around the farm he grew up on when he was our age.  We wanted to just spend time with him.

After a few hours of watching him work he ordered pizza for us and by 2pmish the job was complete.  He had fixed the giant hole and literally made it look brand new.

I wish I had more of the pictures from that day, but sadly that was before smart phones and I could only find this one actual picture of me and my dad as he was drying the spackel. 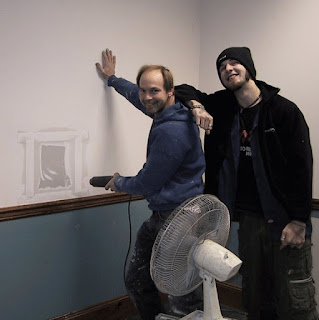 I wish I had the picture of all of us in front of the hole in wall doing the metal sign and my dad attempting to do it (If memory serves correctly he did the hang loose sign instead).

The previous night was pretty fun too...but I won't get into all that.

Looking back at some of the pictures from those days was a lot of fun.  Oh 1999 and early 2000s you were so kind to my hairline. Lol!!! Maybe I shouldn't have ruined you with blonde hair dye, giant spiked hair, bandanas and beanies. 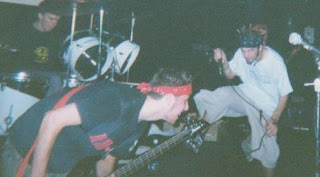 I was thinking about not showing any baseball cards today, but to tie in with my story about my dad is this Crawdad 25 year anniversary card from last year.  Last year the Hickory Crawdads (now a Texas Rangers affiliate) released a 25 card set showing off the best players to come through the Crawdads over the team's existence.  Included were a bunch of Pirates and Rangers and of course Cutch made the cut.

The front of the card is a throwback image to when the player was a member of the Crawdads. 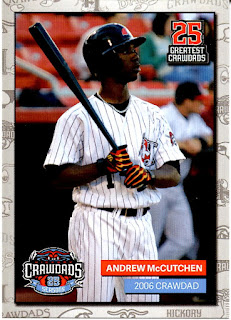 The back features the stats of the player while a Crawdad along with what the player accomplished in the majors. 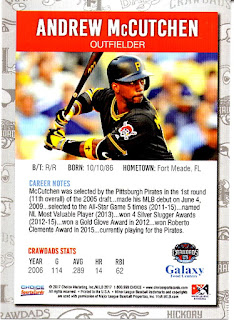 The set has a border that features the multiple logos the team has used during it's history.
Posted by Collecting Cutch at 5:35 AM