When it comes to collecting, I feel like I have no self control.  I want to be the best at everything I collect.

Since 2000 here are some things that I have collected

2000 to 2002 Thundercats
I collected all things Thundercats.  The original figures, the mini figures, carded figures, loose figures, prototypes, comics, vhs videos, vehicles (box and loose), bedding, baby shoes, party goods.  If it had an eye of Thundera on it, I owned it.

Then I sold EVERYTHING!!!

Went full steam ahead with Voltron and Transformers.
Rinse and repeat as seen with Thundercats above.

Sold everything except a 3 foot prototype for the Voltron3D toyline.

Sold the comics to focus on original art
Focused heavily on my favorite character, Gambit.  Would attend about 5 to 8 comic book conventions each year.  I commissioned hundreds of artists to draw my favorite comic character.  I even built a website and had a blog detailing my collection.

In 2005 I attended my first baseball game in over a decade.  It was a Pirates vs Phillies game.  I liked the Pirates as a kid.  Barry Bonds, Andy Van Slyke, Bobby Bonilla, and Doug Drabek were on the verge of entering their primes when they were dominating the NL East in the early 90s.  I thought there would be several Hall of Famers on that team.  Unfortunately none of them were involved with the Pirates in 2005.  I thought about collecting Brad Eldred (who was the first player I saw hit a HR in person for over a decade), but I realized he wasn't going to be any good.  Instead I decided I would follow this kid Andrew McCutchen who drew comparisons to Marquis Grissom.  I saw a few minor league games and grabbed a few cards, but I wasn't having the cardboard crack addiction....yet.

Well I stopped being as obsessed with comics around 2009 when a certain Pirates rookie made his debut.  I began selling off my comic collection and growing my baseball card collection.

Baseball cards specifically 1987 Topps is what started it all for me after all.  Barry Bonds, Will Clark, Barry Larkin...that set was loaded with future Hall of Famers rookie cards.   Well???? Maybe not in the eyes of those voting for the Hall of Fame.  That set was iconic to me.  I had thousands of 1987 Topps all sorted by team in a binder and some pages had 4 or 5 of the same card shoved in each pocket.  I was 6 years old then. Condition meant nothing to me.  I wanted to get back into the card hobby, but all my favorite players were retired or on the verge of it.

I decided I would collect (not at a super level yet) the player the Pirates drafted in the first round the year I got back into attending baseball games.  That McCutchen fella.

My cardboard collection quickly grew to be all things Pittsburgh.  I was grabbing autographs of Ian Snell and Evan Meek and seeking out parallels of Robinson Diaz for the baseball front.  Willie Parker and Rashard Mendenhall became a staple in my growing Steelers collection as my favorite football player (Jerome Bettis) was long retired.  I was spending money on junk!

Around 2015 I stopped focusing on all things Pittsburgh and began focusing on just Andrew McCutchen cards while still building the Topps flagship team sets each year.  I became laser focused on adding and collecting all things Cutch.  I saw my collection grow by nearly 1,000 cards in two years.  I was getting a card a day on average.

I was addicted and COMC and eBay became my dealers.

Summer 2018, I realize that I am watching more Giants games than Pirates games and debating if I am collecting for the joy of the hobby or obsessing over false idols.

I have nothing to be ashamed of if I stop collecting Andrew McCutchen cards.  My collection might be the biggest in the world.  I have so many cards I could post a single card a day of Cutch for nearly 8 years without showing a duplicate.

I mentioned that I wanted to get back on track with my other blog Chasing 3,000 (my Roberto Clemente collection) and I think this will be a good opportunity for me to slam the brakes on buying more cards and appreciating the cards I have more.

Instead of daily "show and tell" posts, I will be providing more content to both this blog and Chasing 3,000 as I will no longer be exhausting unnecessary energy in searching for more cards to buy and appreciating the cards I have.  I hinted at it yesterday when showing a 2018 Series 2 insert card.  There are just way too many parallels to try and collect now.  The thrill isn't long term.

Cutch has appeared in a handful of insert cards for 2018 flagship so far including a 1983, 1983 All-Star, Salute, Superstar Sensations, Opening Day Stars, and Legends in The Making.  That is 6 different insert sets.  Don't get me wrong, I love the exposure that Cutch is still getting despite his career numbers taking a dip over the past three seasons.  The problem with each of those inserts is that there is 4 different parallels to chase (base, red, blue, black). Instead of 6 cards that's 24 cards I would need to add to my collection.  That can be exhausting both in terms of money (although many do go fairly cheap) and time.

Recently another Supercollector, Tanner Jones, who had one of the most impressive Jose Canseco collections in the world decided to give it up and sell his Canseco collection.  Tanner is selling his collection not so much because of being burned out, but because of personal reasons and feeling that it is something God wants him to do.  I respect this decision a lot.  I wish I had a stronger relationship with our Lord.  I have faith, but it's not as clear to me what my path is as what Tanner has recently experienced.

Back when I used to have my Gambit art collection I created a website to showcase it all off.  It was fun and I was able to continuously view the collection even after I sold everything off.  Consequently I sold the address and it now belongs to some company in Japan that has nothing to do with the X-Men character Gambit.

I have been buying so much cardboard that I literally am about a month late with just updating the spreadsheet.  Moreso, I haven't been taking the time to truly enjoy each card.  They just keep getting added to the stack.

I am going to make the decision to slow down with this cardboard addiction I have and instead of buying 4 different parallels of a Topps Museum card all with the same four boring white swatches I will focus more on quality instead of quantity as I continue to Collect Cutch.

There is PLENTY more for me to write about and I am going to try and continue to post as daily as possible.  But, after reading about Tanner's decision to quit cold turkey, I reevaluated my hobby habits and life priorities.  I have never met him in person or even talked to him other than to congratulate his work on a custom card or a recent pickup via FreedomCardboard.  I think it makes sense for me to focus my energy on appreciating what I already have instead of needing to have more. 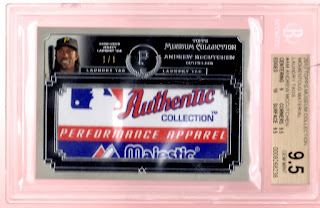 A perfect example is this 1/1 Laundry Tag.  I forgot I had it as evidenced by not including it in my post featuring the Logoman cards I have and that it was never inputted into my spreadsheet. It had fallen by my desk and I never noticed it until I was reorganizing today.  A 1/1 Laundry Tag that I wasn't realizing I was missing?  Yeah I got problems! 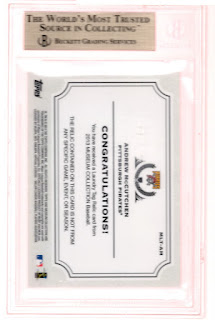 Thank you for the inspiration Tanner.  Hopefully I can get my website, CollectingCutch, finally up and running now that I won't have to always be searching for more new cards.  I did some general layout and design in February, but never did anything else with it.  Looking at so many great player collectors' sites online really makes me want to get mine up and running so that I can appreciate it more and not always be looking for the next "high" of getting more cardboard in the mail.

Who knows, maybe one day I can get a custom card from you containing the likes of Cutch, Clemente, and Bonds.

God Bless and I hope everyone enjoys the content I have going forward.

Posted by Collecting Cutch at 5:20 AM