I am having so much fun going back through and looking at all the cards I have in my collection as I am begining to sort and scan and eventually upload to my site.

I completely forgot how many base cards 2005 Topps Update cards I had of Cutch including 4 Golds!

Among all the Bowman Heritage and Topps cards I came across a few TriStar minor league cards.

Cutch was never one of the big hobby names while in the minors despite getting ranked as high as #13 on Baseball America's Top Prospect lists prior to 2007.  While in the minors "prospecters" were going crazy for Brandon Wood, Andy LaRoche, Justin Upton, Travis Snider, and Jay Bruce.  Guys like Cutch and Kershaw were largely ignored.

Back in the mid 2000s the Bowman prospecting craze with 18 different color parallels hadn't started yet.  There was no such thing as a bubble refractor or carbon fiber refractor 1st year Bowman card.

There was a draft pick card in Update, some Bowman Heritage draft pick cards, one Bowman card with only 4 different parallels,  Just Minor, and TriStar products.

More competition and less products.  What a simpler time it was....

I found two TriStar cards I own of Cutch while a member of the A ball affiliate Hickory Crawdads (more on them tomorrow).  They include the green parallel to 50 copies and the base. 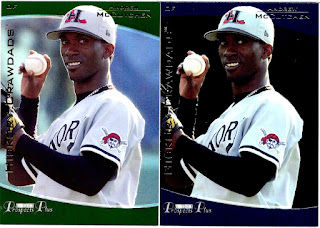 I also own a trio of TriStar cards from his days with the Altoona Curve.

These include the Green (/25), Reflective (Foil Refractor not numbered), and base.

To put into perspective, Charlie Hayes' son Ke'Bryan Hayes, has reached AA Altoona Curve and currently has 409 different cards including 1/1s.  That is a little bit crazy....just a little.
Posted by Collecting Cutch at 9:54 AM