San Diego Comic Con is in full effect at the time of typing this.  I had always wanted to attend it just once as I am a nerd deep inside.

Fans were previewed a trailer for the new Titans TV show exclusive to DC's streaming service.

The trailer begins with Robin saying "F*** Batman".  The DC Universe aka Zak Snyder's playground is always so dark.  When I think of the Titans I think more fun than brooding and morbid.  The show should have followed in Marvel's footsteps and did something similar to how the characters of Guardians of the Galaxy interact.  Instead we get "F*** Batman"

Let me clarify something, I am a big fan of Batman.

I am not a big fan of the Reds.  They historically have beaten my Pirates in all the important games.

Let's travel back to the year 2012.
With the Pirates on the cusp of finally breaking their 20 year losing streak they would have to face the Reds in the final home series and win out or risk losing their 82nd game and thus ensuring another losing season.  That year, like the previous year, the Pirates were in first place at the All Star break.  Like the previous year the team suffered a second half collapse.

On September 28th, 2012 the Pirates would face Homer Bailey. 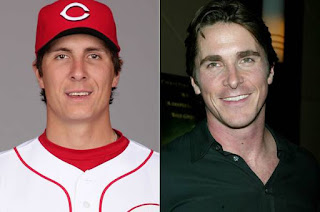 Homer Bailey, who looks an awful lot like Christian Bale, made sure the Pirates would lose their 82nd game in a way only the Pirates and their faithful fans could bear witness too.  Bailey was masterful that day as he pitched a no hitter using 115 pitches over 9 innings. 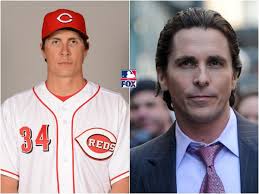 His only blips were a walk to Andrew McCutchen and an infield error that Scott Rolen booted off a Clint Barmes one base error. 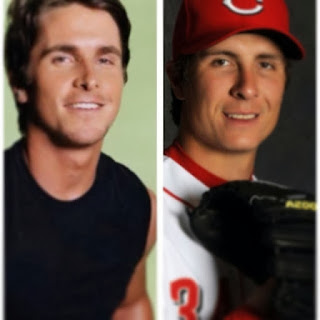 With Bailey having a terrible season, it seems appropriate to show off how well Cutch has hit Bailey over his career. 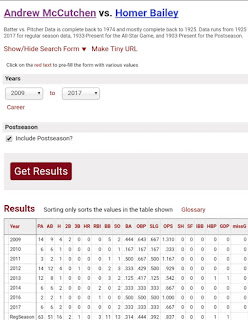 Oddly enough, the only year that Bailey contained Cutch was during Cutch's MVP 2013 season.

Following the 2013 season, Bailey met with new Reds manager Bryan Price and wanted to make sure the team was heading in a direction of winning divisions and competing for the postseason.  The Reds seemed determine to go deep in October and signed Bailey to a 6 year $105million extension in February 2014.  It is currently one of the worse contracts given out in the past few seasons only being outdone by the Chris Davis Orioles contract.

I took advantage of a 20% off coupon on eBay a few months ago and snagged this card that I had long desired.  While the price is still too high for a guy who has had a WHIP over 2 and ERA in the 6s the past few years, I wanted the card to remember the guy who secured the Pirates 82nd loss of the 2012 season as it would be the last time the Pirates would have a losing season for 3 years. 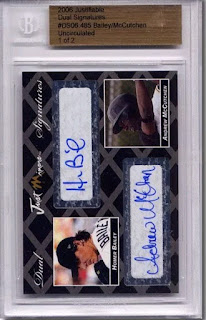