Maybe I am the only one that does this, but each year I like to use a player's name and make a fun interesting name out of it for my fantasy sports team.

This year my two fantasy football team names are BoswellThatEndsWell and WhatJuJuTalkinBout.  So far my teams are 1-1.

My best team I ever assembled though was a team for my ESPN fantasy league where my team lost only 1 week the entire season.  1 week! That was it.  My team name that year was Bust(in)er Posey.   To this day, my girlfriend still calls him that because of how well my team did and how I always talked about my ridiculous record that year.

I recently made a fairly cheap purchase considering the low numbering, product, players, and design of card. 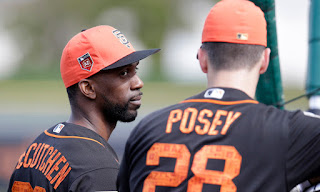 Buster Posey and Andrew McCutchen were team mates on the Giants for a short time, but they also were team mates in their youth too.  You can read the article about they traveled to Taiwan together in high school here.

What will likely be my only pairing of Cutch with Buster Posey both in a Giants uniform was acquired for the very fair price of $26 delivered.  There aren't any nice patches on the card, but that is what Topps Diamond Icons generally has.

Posted by Collecting Cutch at 6:35 PM