In my recent desire to look at my cardboard more than just buy more and more I have rediscovered why I love to read the backs of baseball cards.

Let's get this out of the way first, I loved the unique facts that Topps60 inserts provided on the backs of the cards in 2011.  They had some really unique stats to get players pictured on the fronts.  Cutch was coming off his second season and arguably a borderline All-Star year in 2010 as he was transitioning the young Pirates team into a pre All-Star break contender. 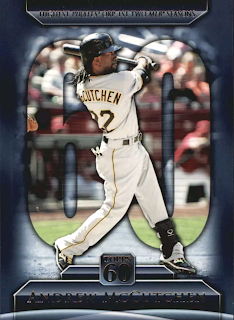 This 2011 Topps60 insert shows us how the young Pirates center fielder impacted the Pirates franchise the moment he stepped on the field.  In his first 2 seasons as a Pirate, Cutch had the 5th best On Base Percentage for a team that was celebrating 125 years of rich history. 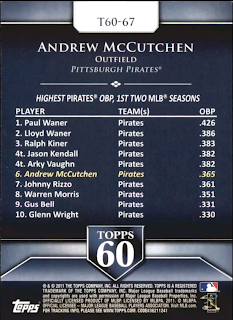 You'll notice that four of the first five names are Hall of Famers.

The Waner Brothers would patrol the outfield for the Pirates for many years and currently have the most sibling career hits with 5,611 cumulative hits between the pair of Hall of Famers known as Big Poison (Paul) and Little Poison (Lloyd).

Ralph Kiner had a short baseball career, but it was a dominant one.  He is the only player in baseball history to win the HR crown 7 years in a row.  In an age when the ball wasn't jumping off the bat he managed to hit homeruns at a historical rate.

Jason Kendall is an obvious choice for the Hall of Very Good.  He is one of only a handful of catchers to collect 2,000 hits at the catcher position.  Character issues and injuries will likely forever keep Kendall out of the HOF, but no one can deny that the unique catcher was a true talent on the field.

Arky Vaughan had the rather difficult task of following the greatest shortstop ever Honus Wagner (sorry Derek Jeter).  He did just fine though collecting 2,103 career hits in his 16 year career.  He passed away at the early age of 40 years old in 1952.

Posted by Collecting Cutch at 6:19 AM