Keeping Up With Cutch

My all time favorite player has been traded twice since wearing the black and gold in the 2017 season.  While I haven't been as active "Collecting Cutch" (especially recently) I am still doing a fairly good job of keep my Cutch collection stats comparable to Cutch's career stats.

I realized this when I entered my 1/1 count as 203.  This stood out because Cutch's career HR count at the end of his Pirates career was 203.

Another similar number is my total number of unique Cutch cards is 2,386 cards (not counting the small stack not yet logged).

Looks like I will need 28 more cards to keep pace with that.

As stated several times in the past month I am still Collecting Cutch, but not at the torrid pace I was doing in 2015-2017.

Here is one of my favorite cards of Cutch in Giants gear that I obviously picked up this year. 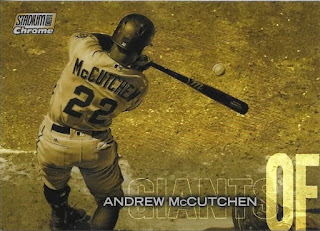 These Gold Minted Stadium Club Chrome cards fell 1 per case.  I have the Superfractor too, but think that the gold mint looks far better.

I have been having trouble with my scanner lately, but plan to get it fixed soon.  I have to! October and all the pink parallels and Save The Boobies month is just around the corner.
Posted by Collecting Cutch at 8:00 PM