Yeah I Got Skills, What You Gonna Do Bout It?

I'm back! Expect daily updates again as I have returned from an unexpected week of double shifts.

Things are back on track now.

My favorite era of Collecting Cutch cards is 2009 to 2015.  There are so few cards that I need with print runs over 50 copies in that era that when a rarer copy shows up, I really look forward to getting it.

I recently got excited when I picked up this 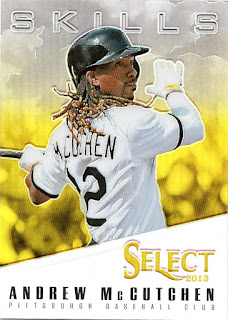 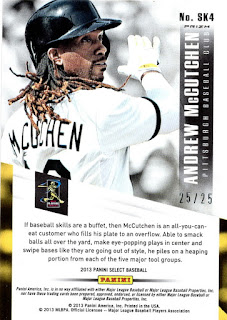 It is numbered to only 25 copies.

In case you were living under a rock a few years ago you probably saw the viral video of a guy named Joe Charman where he does strange things (often trick shots or throwing objects) and says "Yeah I got Skills, what you gonna do bout it?"

Well with adding this gold 2013 Select Skills Gold parallel I can say...
Yeah I've Got Skills, What You Gonna Do About It?

I now have the base and Gold Prizm

I still need the Prizm Refractor (not numbered) and Black Prizm (1/1)
Such a simpler time when even the unlicensed products had only 4 parallels to chase.  To put it into perspective, this year's Prizm has 27 unique parallels to chase including snake skin, lime green donuts, cosmic haze, among many other strange names.

2013 Select was a great product and I miss the days of base, Refractor, gold, and 1/1 color parallel.
Posted by Collecting Cutch at 8:22 AM