Debut of a new auto?

I am in the ever long process of trying to catalogue all my Andrew McCutchen cards.  Back in 2017 I had 125 unique certified autographs of Cutch.  You can revisit that post here.

Cutch has begun signing a lot more for Topps and Panini in the past two years and in 2019 alone there was 90 uniquely designed cards bearing a certified autograph of the former MVP.

It didn't hit me how insane that is until I personally went through to count them all.  I probably have close to half that many which is still an insane amount, but among all the autographs I have of Cutch NONE of them look like this 2019 Topps Chrome Debut Materials Autograph numbered to 50 copies. 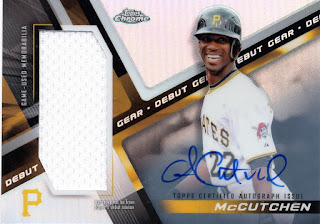 You might look at that signature and not think anything looks unique about it.

A closer inspection of the signature will show some breaks of the pen not found in other Cutch cards I have signed.

I have seen Cutch put a break in the pen between the "T" and "C" on multiple occasions. 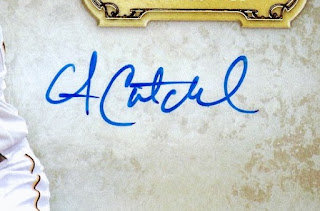 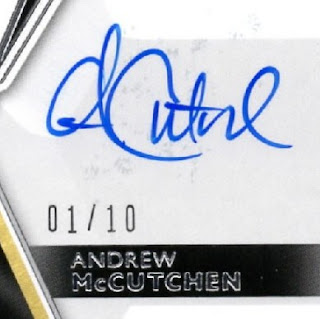 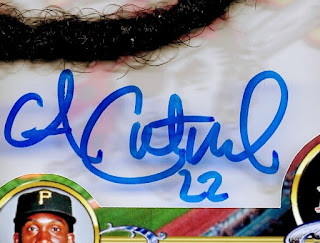 But I have never seen two breaks after the "T" like in the 2019 Rookie Debut Relic.  Often times I actually see no breaks for his newer style signature (post MLB debut) as can be seen below. 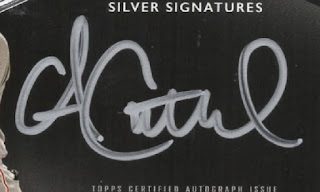 With so many players just putting legible initials at best as their signatures it is nice to see Cutch actually make a legible and identifiable signature on all his cards. 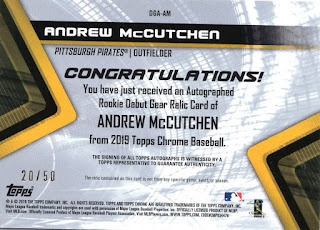 The back of the 2019 Topps Chrome Rookie Debut Gear Relic identifies this as an authentic signature of Andrew McCutchen.  I am sure it is a legit auto, but it is just odd to see a style signature he has never used before.  And with nearly 200 unique signatures of Cutch in my possession I feel I am an aspiring expert.

With only 8 more posts until I reach 1,000 posts here on Collecting Cutch, I have been slowly putting together some quality no filler posts as I march towards the millennium mark.
Posted by Collecting Cutch at 8:27 AM