It has been a few months since I showed off Cutch wearing some Throwback Uniforms from his Pirates days.
I am going to show off a pretty unique (pun intended) and short lived release by Topps.
Today I am looking at the gold parallel from 2009 Topps Unique 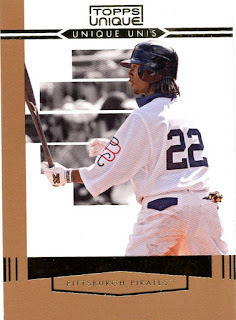 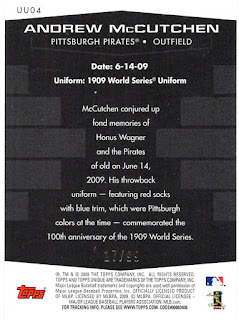 As you can see the back of the card discusses when the unique throwback uniform was worn and what the occassions was for the throwback uniform.
Cutch made his MLB debut just a week and half earlier and was starting to make people aware that he may be a Rookie of the Year despite such a late start to the year.  The Pirates hosted the Detroit Tigers on June 14, 2009 to honor the 100 Year World Series that saw the Honus Wagner Pirates defeat the The Cobb lead Detroit Tigers.
I wish the back of the card also mentioned Cutch's stats for the game.  He went 2 for 3 with two walks, a stolen base, and 2 runs scored in the 6-3 Pirates victory.
Posted by Collecting Cutch at 4:52 AM