Sweet Spot autographs from Upper Deck made all collectors nervous of fading autographs in the future.
Panini has recently tried the same concept. Time will tell how they hold up over the years. 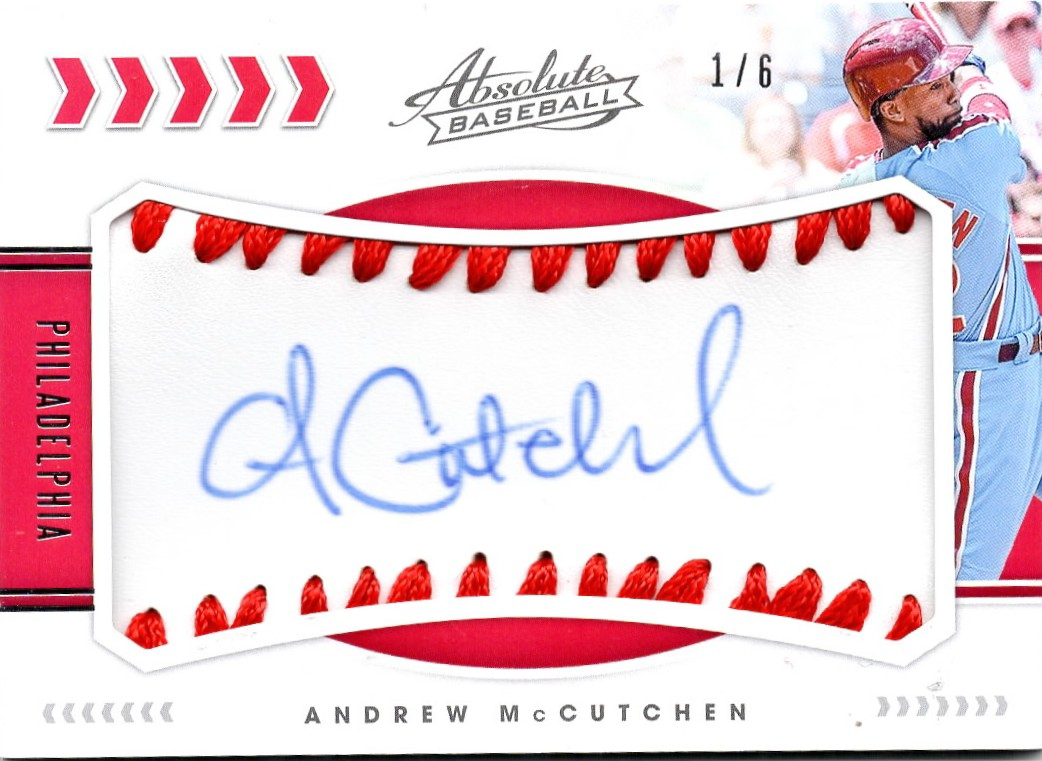 Absolute Baseball recently came out for 2021, but Cutch signed a total of 12 of these baseball themed cards for the 2020 product. Among the 12 are 6 of the red stitch baseballs, 5 of the green stitch baseballs, and 1 of the red/blue stitch baseballs.  That's it! 12 of them total.
Very few active, non rookie, players signed these style cards.  Most of the checklist consists of retired players, many of which were Hall of Famers or dominant players that are borderline Hall of Famers in their day.  The active players checklist contains Cutch, Jordan Hicks, Shohei Otani, Dustin Pedroia (he hadn't officially retired yet), and Dylan Carlson.
Retired players in the Hall of Fame include Frank Robinson, Chipper Jones, Pedro Martinez, Cal Ripken Jr, Frank Thomas, Ken Griffey Jr, Dave Winfield, Barry Larkin, Don Sutton, Eddie Murray, Jeff Bagwell, Wade Boggs, Reggie Jackson, Mariano Rivera, Ozzie Smith, Vladamir Guerrero Sr, Randy Johnson, John Smoltz, and Whitey Ford.  That is a stacked lineup for Hall of Famers.  Print runs range from 10 to 50 depending on the player for the standard red stitch baseballs.
Retired, non Hall of Famers include Paul Konerko, Dwight Gooden, Omar Vizquel, Don Mattingly, Roger Clemens, and Rafael Palmiero.
There is a video of the 1/1 Cutch being pulled on a YouTube break and I have tried to acquire it to limited response.  I do have the green foil, green stitches also, but will be sharing that off next March.
Posted by Collecting Cutch at 11:42 AM