Fightin' With The Irish

Continuing an Irish theme week's worth of posts I am looking at the true Irish playing in the MLB debut.
To the best of my knowledge there is only one active player in MLB that was born in Ireland and that is PJ Conlon who has appeared in only 3 games for the New York Mets.  However, there are plenty of players who played for Notre Dame's Fighting Irish.
A few of them have been teammates of Cutch over the years and a few of them have faced Cutch on the ballfield over the years and like today's examples, a few have been both an enemy and a teammate.
⚾ ☘ ⚾ 🍀 ⚾ 🇮🇪 ⚾
Let's begin with a famous pitcher from Notre Dame, Jeff Samardzija aka The Shark 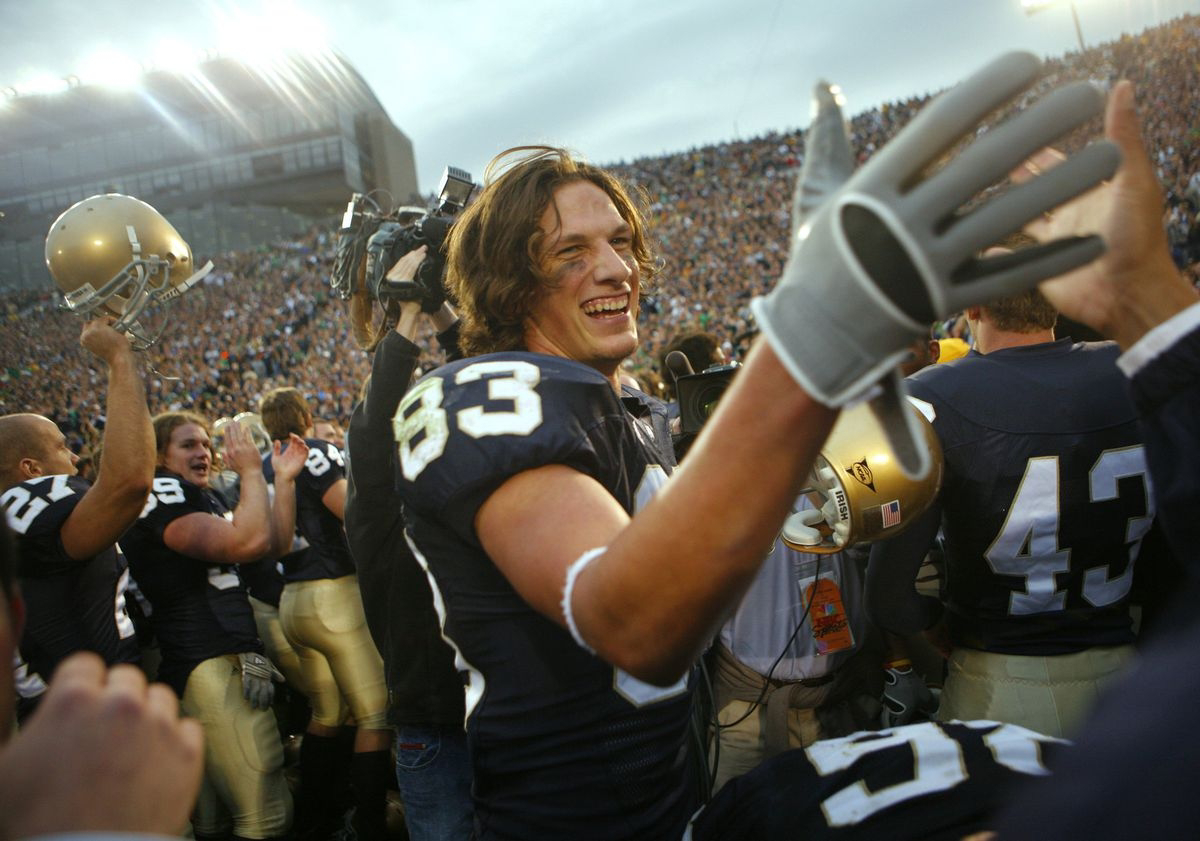 Wait, that's a football player.  Yup, in case you didn't already know Jeff Samardzija was a two sport athlete while playing for Notre Dame.  He excelled on the mound as a pitcher and on the football field as a Wide Receiver. 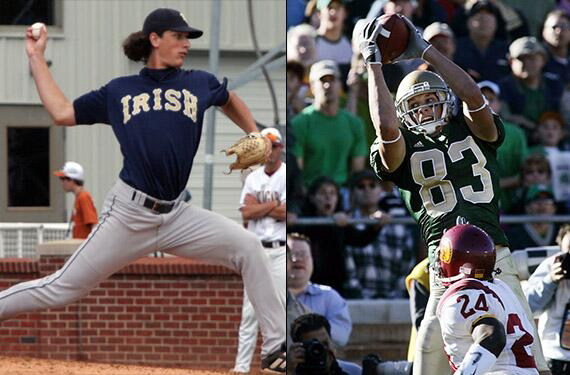 Jeff was a standout receiver for the Notre Dame Fighting Irish playing in all four years of his college career (2003-2006).  He set a campus record by recording a Touchdown reception in 8 consecutive games.  He finished as the all time leader in reception yards with 2,593.  In addition to being part of All American Teams for his performance on the Gridiron, the Shark was also dominating on the diamond.  He had the second best Big East ERA (2.95) and second lowest opponents batting average (.209) before being drafted by the Chicago Cubs in the 5th Round of the 2006 Draft.  Once drafted in the MLB Draft he pulled out of the NFL Draft, thus ending any chance of another potential two sport professional athlete.
He faced Andrew McCutchen a lot over his career as a division rival and Cutch owned him with a .375/.457/.550 triple slash line, good for a 1.007 OPS.
Jeff became an All Star in 2014 and was traded to the Oakland Athletics moments before the 2014 All Star Game.
Cutch and Shark later became teammates for three quarters of a season in San Francisco in 2018.
I have an Andrew McCutchen Baseball America Cover coming to me (along with a few other Cutch on the cover purchases) and as you can see the cover also mentions Jeff Samardzija giving up his football career to pursue a Baseball career. 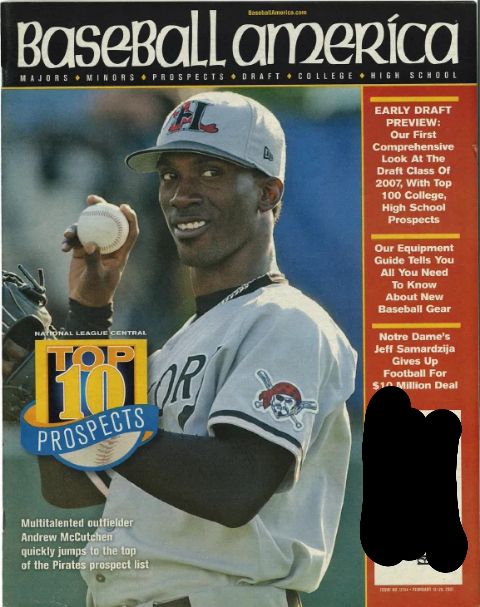 John Axford was born in Ontario and got a scholarship to attend Notre Dame where he pitched for 3 seasons, going 14-6.  He had to have Tommy John surgery during his junior year, but returned for his senior season getting a bachelor's degree in film and theatre.
He was drafted by the Cincinnati Reds in the 42nd round of 2005, but opted to return to college using his one year of athletic eligibility to catch attention of other teams.
Following 2006 the New York Yankees signed him to a minor league deal where he competed in the Yankees farm system for 2007.  He would work the off season as a telephone sales agent before catching the attention of the Milwaukee  Brewers who signed him to a minor league deal.
After excelling in the minors he was called up in 2009 to be a member of the Brewers bullpen where he would be used in more high leverage situations over the next season.  In 2010, the Brewers closer (and then All Time Saves leader) Trevor Hoffman blew two games in a row to the worse team in baseball, Pittsburgh Pirates and John Axford was moved to be the team's closer for the remaining portion of the year.  He finished the season converting 24 of 27 save attempts and going 8-2 with 76 strikeouts in 58 innings.
In 2011 Axford took the closer role and turned it into him getting the Rolaids Relief Pitcher of Year award.
He would bounce around from team to team begining in 2013, playing with 7 teams in 6 years including stays in Colorado, St. Louis, Oakland Los Angeles, Cleveland, Pittsburgh, and Toronto.
Andrew McCutchen became teammates with Axford in 2014 when the Pirates claimed Axford off waivers to strengthen their bullpen. He received a Pirates card in 2015 Topps Series 1.
Over the course of their careers, Axford had faced McCutchen over 15 plate appearances.  McCutchen has a .400/.533/1.000 triple slash line vs the former Notre Dame Alumni.  Among his four hits are 2 Home Runs, which were turned into trading cards in 2016 as part of the Honus Bonus Program Career Milestone set.  This set takes some of the star players and makes 1/1s for the players based on Home Runs, Wins, and several other milestones.
I have almost 10 of these 1/1s in my collection including this one which recognizes Cutch's 80th Career HR, a solo shot off John Axford. 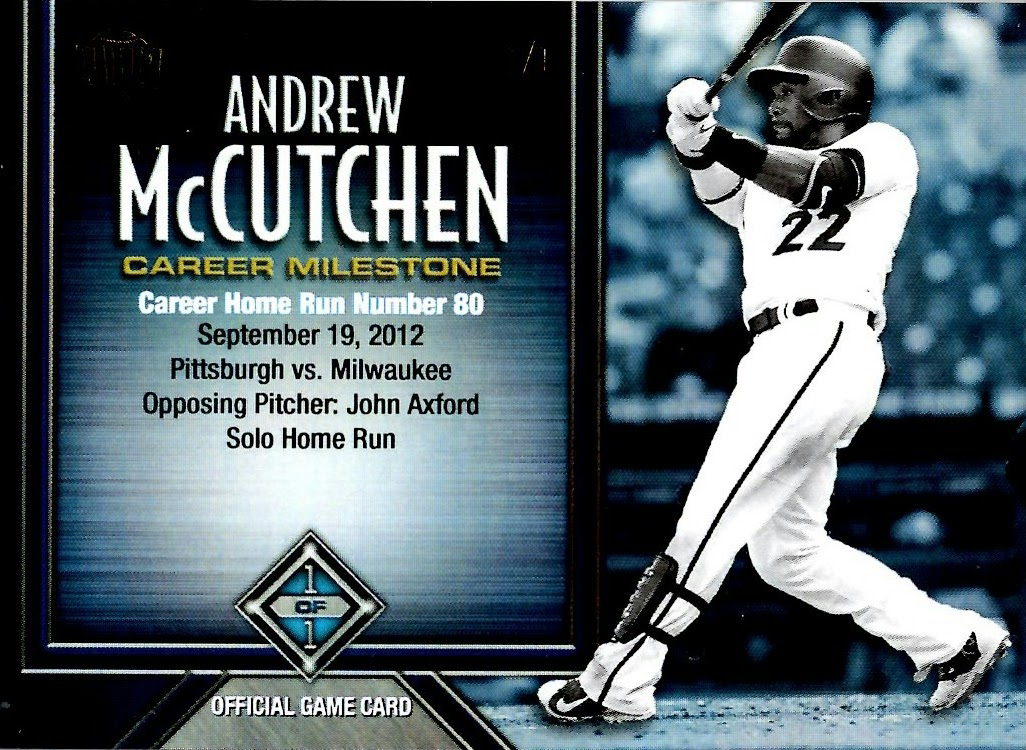 I still need to get a ticket stub for this game to help with my Cutch HR Ticket Stub collection.
⚾ ☘ ⚾ ☘ ⚾
Another player who once called McCutchen a rival, but most recently called him a teammate is David Phelps.
Phelps had a strong commitment to attend Notre Dame and went on to pitch four seasons for the Fighting Irish. 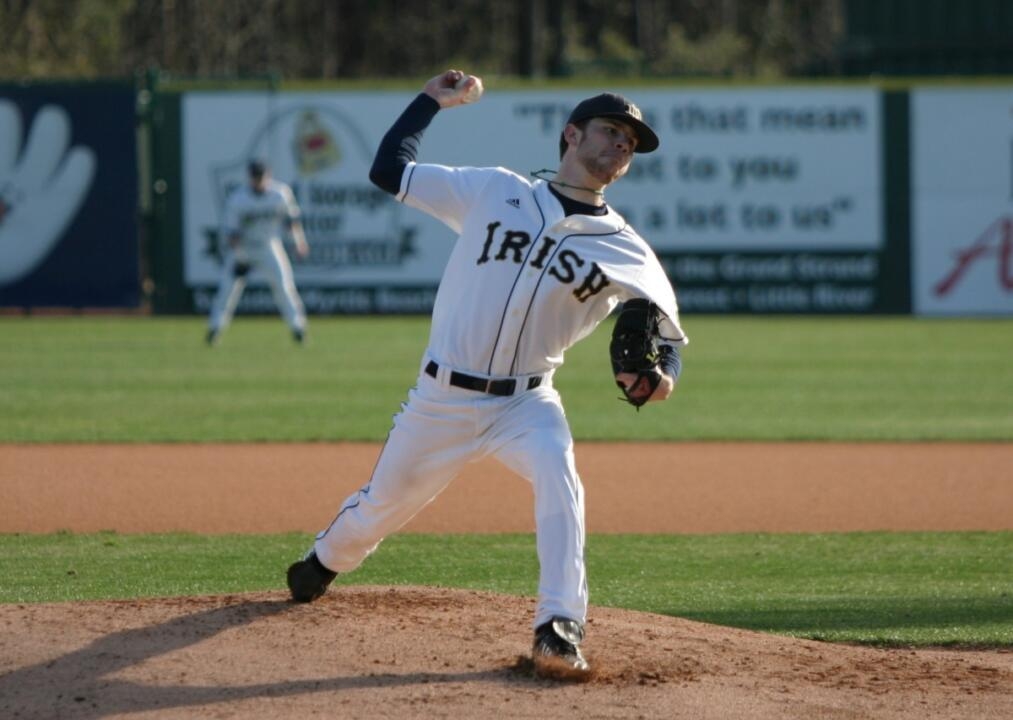 He was drafted in the 14th round of the 2008 draft by the New York Yankees and was part of a trade that got Garrett Jones to play for the Yankees when Phelps was shipped off to Miami. 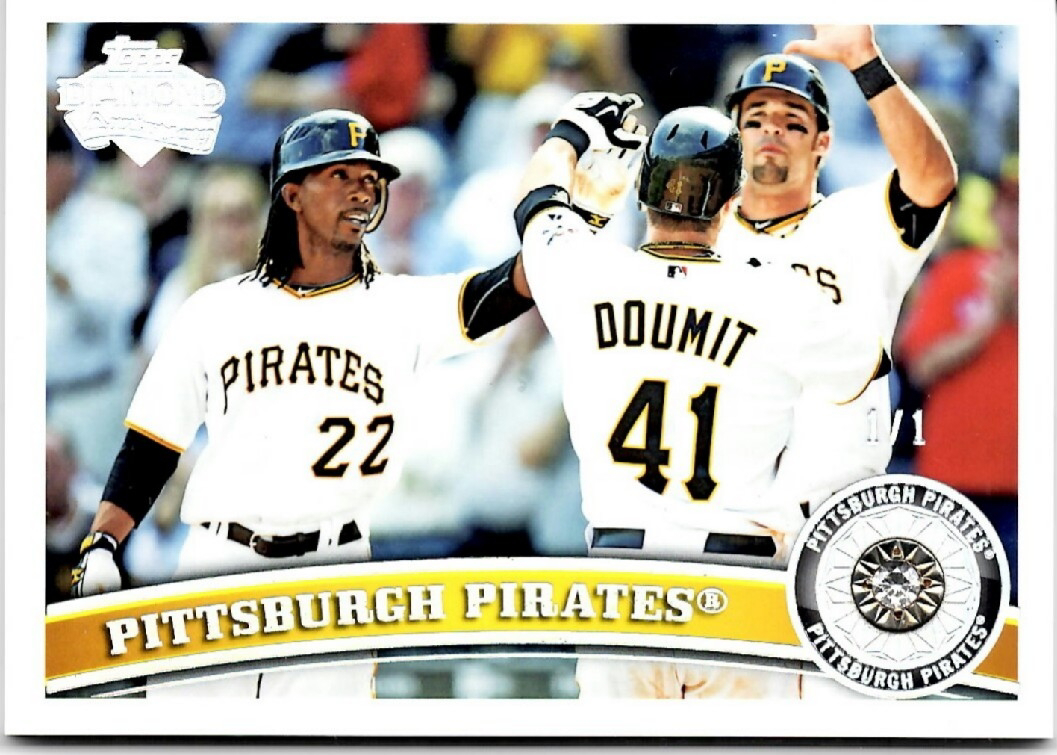 Phelps would go on to pitch for the Blue Jays, Cubs, Brewers, and eventually Phillies on the 2 years that followed.
In 10 at bats, Cutch went 1 for 10 versus Phelps with 3 strikeouts and 1 walk.
⚾ ⚾ ⚾ ⚾ ⚾
To close things out is the pitcher who had a perfect season (2008) of being a closer, but is also gave up the first Walk-off Homerun in Andrew McCutchen's career back in 2009.
Brad Lidge aka Lights Out 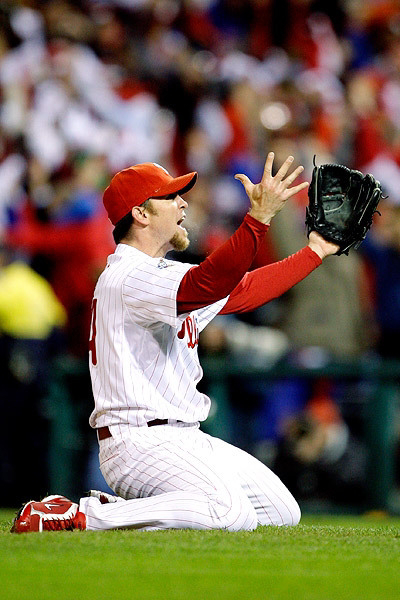 Brad went to Notre Dame and was the pitcher of the year when he struck out 93 batters in 80 innings.  This got him the attention of the Houston Astros who drafted him in the 1998 draft. 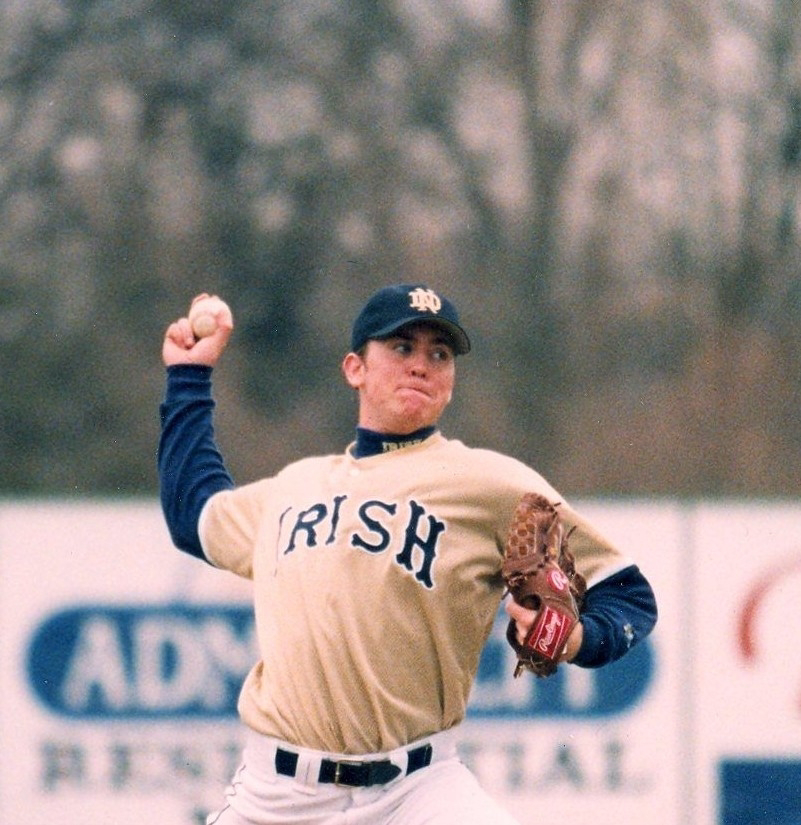 He was the closer for the 2005 NL Pennant Winners Houston Astros and later the 2008 World Series Champions Philadelphia Phillies.  He was a two time All Star (2005 and 2008).
Cutch only faced Brad Lidge twice in his career.  One time Brad struck him out, the other time McCutchen got the best of Lidge.  You can view the epic walkoff on YouTube here.
It's been rumored that moments before the game he was talking to teammates that if he ever hit a walk off homer he would do an Air Jordan slam dunk impersonation. 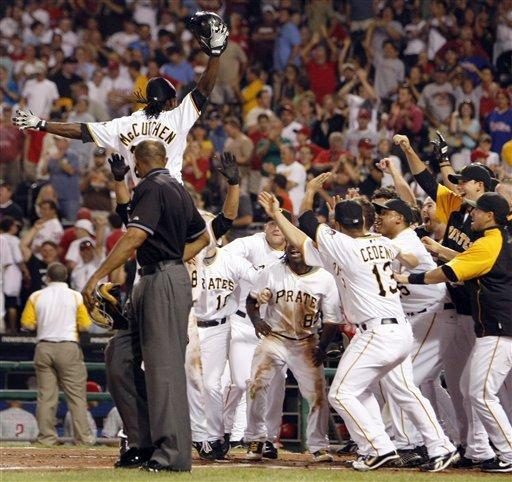 I got Topps artist Darrin Pepe to draw a sketch card for me and he put the celebration from Cutch's 1st Walk Off HR on it. 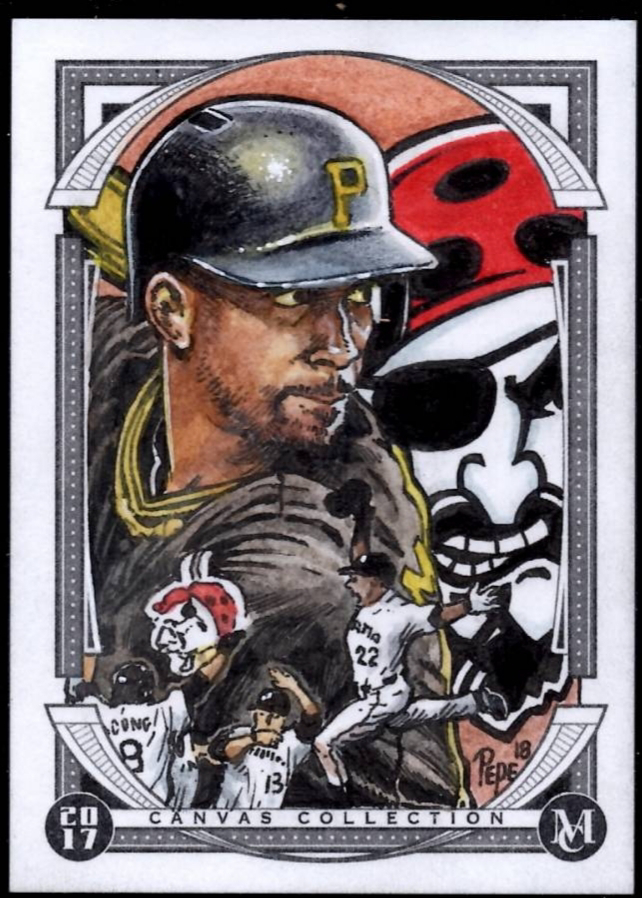 Who are some of your favorite Notre Dame alumni? (Any sport) Mine is Jerome Bettis
Posted by Collecting Cutch at 10:15 AM