#tbt: Better Than a Dick

If that isn't an attention grabbing blog title, I don't know what is.

I have done Heritage Comparisons for a few years where I look at an Andrew McCutchen card on a vintage design and compare it to who was the original card number.

2018 Topps Archives gave Cutch TWO cards on a 1959 Topps design.  I previously showed off the Bashers of the Bay card that featured Cutch with Buster Posey.

His main card however, is card #5. 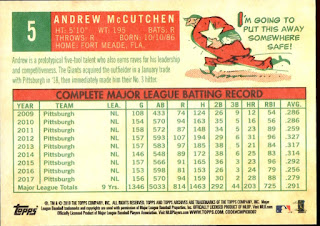 The same card numbering belonged to Dick Donovan in 1959.

Dick Donovan, who also wore the number 22 during his career, was a pitcher for the Chicago White Sox. 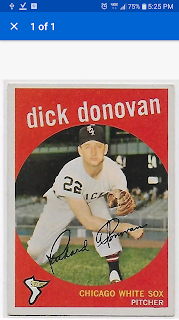 Donovan like McCutchen was a 5 time All-Star.  He pitched for the White Sox, Tigers, Indians, and two defunct teams (Washington Senators and Boston Braves).  He finished his career with 880 strikeouts  and a 3.67 ERA while amassing 122 victories in his big league career.  He served the Navy after World War 2.

Topps did a nice job with this year's Archives set by creating some more unique parallels that we haven't seen in prior Archives releases.  There was a sky blue, purple, silver, and gold parallel.  The gold is by far the rarest of the bunch.

I purchased the gold foil border numbered 1/1 to help complete my rainbow when eBay was running a 15% off cart purchase during the holiday season. 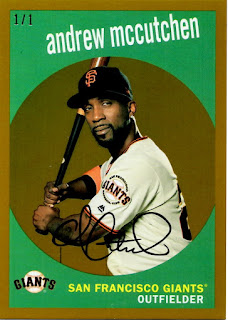 I will show off some other parallels in the future from the 2018 release.  One of them I am really excited to show off and have selected a date in April.

Posted by Collecting Cutch at 5:10 AM