During the month of October I purchased three cards of Cutch wearing a Yankees uniform.

One was a Topps Now Postseason card for the Wild Card game.  It just got printed and arrived.

Another was a short print photo variant of Cutch wearing the pinstripes found in 2018 Update.  I received that card on Halloween.

The first "card" I received was a limited print sketch card from Edward Vela that is signed and limited to 50 copies.

For those unfamiliar with his work, Edward digitally paints images of players and prints them out on slightly thinner stock (similar thickness to acetate cards from the 90s). 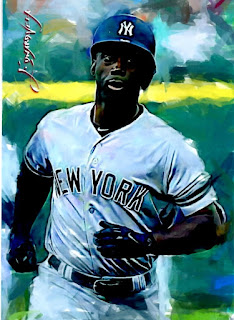 They hold no value long term and the digital paintings are cool, but for just a novelty item I see the benefit of adding them for the $5 price tag. 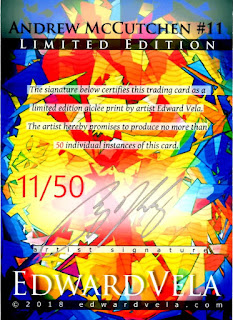 I will show off the other Yankees cards I have of Cutch in the future and am currently having a sketch card drawn by Topps Super Artist Juan Rosales wearing the legendary pinstripes.  It looks amazing so far!!!
Posted by Collecting Cutch at 12:26 PM