A Pair of Printing Plates Never Seen Before

I have been seeking out some more 1/1 plates of late which has lead me to find these. 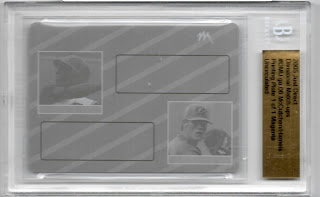 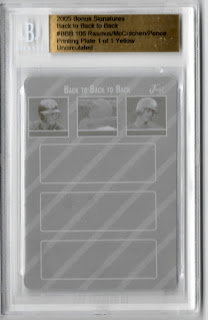 To be honest, I don't know what came over me.  I'm not a huge fan of Just Minors and all of their sticker autos from 2006 to 2009.  A seller on eBay seems to have come across a large amount of inventory from the defunct company.

With such stars as Cole Hamels, Colby Rasmus, and Hunter Pence appearing on these cards at that moment I submitted a pair of best offers for the group.

Unlike other printing plates which clearly have distinct coloring between magenta, cyan, yellow, and black these Yellow and Magenta plates look oddly similar in color. 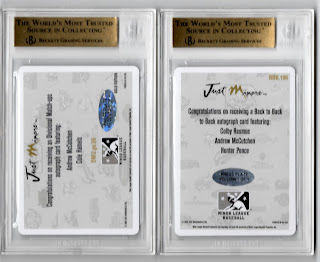 Despite not being licensed and being uncirculated printing plates these cards are still registered on Beckett, thus they count towards my new 1/1 total climbing to 121 and 122 respectively.
Posted by Collecting Cutch at 4:36 PM