As everyone else in America is recovering from the Super Bowl last night, thus officially ending football season, it's important to realize Spring Training is just around the corner.

It was only 3 years ago today that the sports world lost a Hall of Fame slugger, TV/radio personality, and a Pittsburgh Pirates legend.

Ralph Kiner dominated the National League by launching many Home Runs out of Forbes field in the 40s. He ultimately had his career cut short due to injury, but during his prime he was a wrecking force having lead the NL HR title 7 years in a row (a feat that no one to this day has accomplished).

Let's look at the most recent HR leaders for the past 7 years and see how many times their name appears.

Ok, so maybe Arenado can go on to carry his long ball dominance until he reaches age 30? Doubtful, but we'll keep an eye on it.

Well, a team might win 7 years in a row as Trumbo, Davis, and Cruz all played for Baltimore when they won the title. Even then though, I don't know if that trend will continue.

Even if it does, it will take a team effort to match what Ralph Kiner accomplished.

Even though he wasn't a game changer and doesn't have any flashy milestone numbers, let's remember Ralph Kiner today as I show off my own little Kiner's Korner on Collecting Cutch 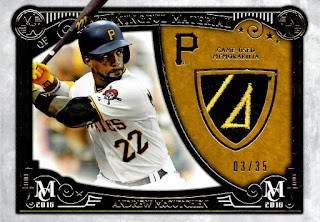 The card above is not the nicest of my Cutch/Kiner cards, but it is the only one that shows tribute to the former Pirate Hall of Famer.  The patch on the card is the 4 worn on the right arm sleeve during the 2014 season. 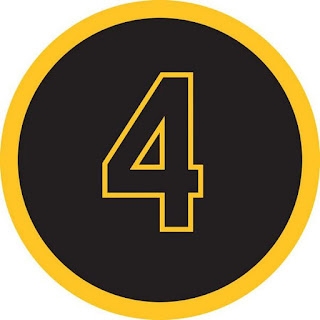 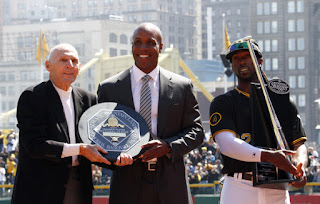 Figured I would show an image from the 2014 Home Opener when former Pirates MVPs Dick Groat and Barry Bonds presented Cutch with his 2013 NL MVP Award and his 2nd straight Silver Slugger Award.  Notice the patch? 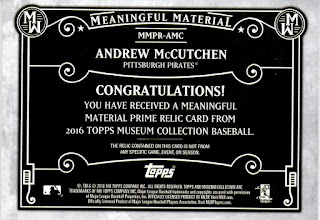 And above is the back of the 2016 Museum card I showed earlier.

Now it's time to show off the dual relic/autos 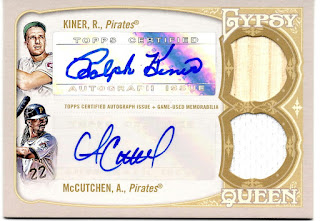 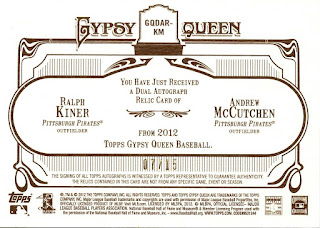 Now for just some more relics 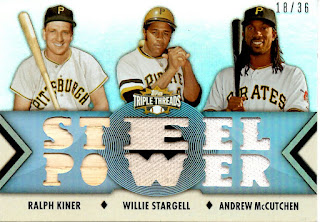 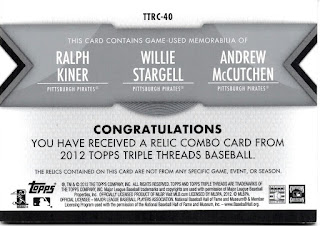 It was fun to go through these older cards and scan them all in and remember the joy they brought me first acquiring them. I would love to add the parallels of the "Steel Power" Triple Threads card you see above.


Posted by Collecting Cutch at 7:35 AM