Ooooooh you almost had it...

I am sure everyone knows that commerical where the guy says "oooooh you almost had it. Gotta be quicker than that."

Well, after winning my most recent 1/1 bringing my total to new heights (over 120 now) I began thinking about the missing 1/1 from my collection.

This isn't the first time I have managed to grab 3 of the 4 plates.  I will show some of the other near complete printing plate runs in a future post. 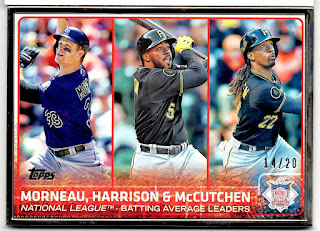 In 2014 both Andrew McCutchen and Josh Harrison were competing for the batting title, but Walt Weiss, the Colorado Rockies manager was sitting Justin Morneau a lot down the stretch (he did the same thing this past year with DJ LeMehau). 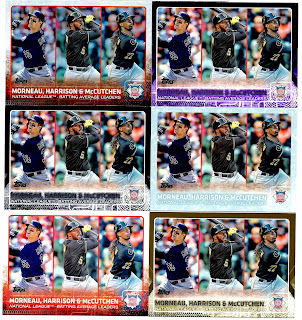 I am still seeking a few of the parallels (black 1/1 plate, pink,blank back 1/1)

The back shows just how close Harrison and Cutch were.
Makes me wonder what the 2014 Pirates season would look like with Morneau at 1B all season instead of that Jones/Sanchez platoon. 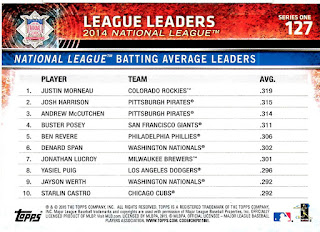 Posted by Collecting Cutch at 3:36 PM