I Love This Hobby

News broke yesterday from a 2019 Topps Luminaries booklet that had 50 sticker autos of some of the game's most popular living home run hitters from the 80s to current.  Johnny Bench and Carl Yaztremzki were also on the booklet.  It was a monster hit with names like Trout, Guerrero (both them), Griffey Jr, Acuna Jr, Ortiz, Otani, and many others.  I couldn't even imagine getting a hit like that.  It is probably worth 10s of thousands of dollars.

I recently hit a pretty big booklet card myself, by my standards.
2013 Topps Five Star booklet

Cost me $81 delivered for a pair of players that are legends in Pittsburgh.  It is possible that Cutch gets his jersey retired post playing career and Willie has already had his jersey number retired along with getting a bronze statue built outside PNC Park.

At the time of purchase the hottest name in the hobby was Aristides Aquino, who is nicknamed the Punisher. 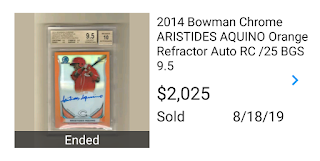 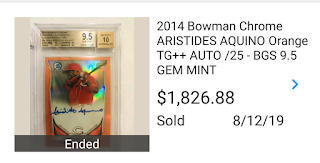 I am not sure if Reds collectors are just over paying, but the concept of prospects demanding such outrageous prices is mind boggling to me. 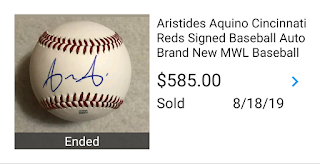 His sloppy signature isn't rare and yet people are paying more for an autographed baseball of him than a baseball signed by any living Reds Hall of Famer.  It boggles my mind!!!!

Yes, he had a hot streak in his call up, but since then he hasn't done much of anything.
His most recent 15 games he has a .236/.263/.455 line which equates to an OPS of .718.  If his recent numbers were continue for an entire season he would be the 68th best in National League and not even break the top 125 in majors.

I know the hobby is always looking forward for who the next great superstar could be and maybe one day in 20 years we could look back at Aristides numbers and be amazed by the numbers he put up playing into his late 30s, but I highly doubt that will be the case.

To put into perspective, Willie Stargell a Hall of Fame power hitter already appeared in two All-Star Games, had 236 RBI, 343 hits, and 59 Home Runs by his age 25 season.

Another Pirates legend, Andrew McCutchen, had 2 All-Star Games, 293 RBI, 82 HR, and 694 hits by his age 25 season.  Cutch was on pace to beat Stargell's numbers over his career.

Thanks to all those in this hobby neglecting this amazing 1/1 early Five Star release booklet in favor of cards of 25 year old rookies.  I will gladly pay $81 for 1/1 cards like this all day every day.  People can enjoy their $260 autographs with print runs of over 1,000 of 24 year old Pete Alonso. 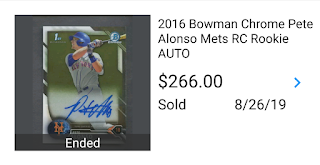 I will stick to cards printed with two players who represent nothing but class on and off the field for my favorite team, the Pirates.

The only problem?
This is the only dual signature of Cutch and Stargell ever produced.