He didn't miss it, he crushed it

Have you ever wanted to own a Home Run baseball from your favorite player?
Well, I can say that I do. 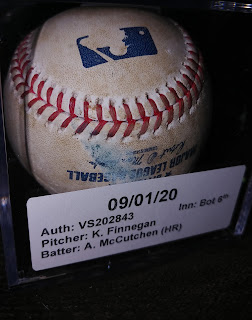 It was authenticated by MLB and Hunt Auctions. 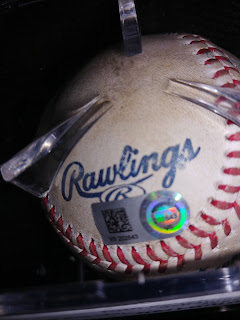 With the unfortunate COVID pandemic that plagued the world this year, no fans were permitted to watch a Philadelphia Phillies game in person.  Fortunately however, the Homerun baseballs were auctioned off for charity and I was able to acquire the 238th career homerun of Andrew McCutchen.  On September 1st, 2020 Cutch launched (and if you watch the video below, that may be an understatement) his 5th homer of the shortened year.  He would hit 5 more in the month of September to finish with double digit homerun totals for the 12 straight season joining a list of only 3 other active players to hit double digit round trippers since 2009.  The other three players are Nelson Cruz, Robinson Cano, and Edwin Encarnacion.
You can click here to see the video on YouTube or hopefully I was able to embed the source correctly from MLB below.
Posted by Collecting Cutch at 3:51 PM