Occassionally though, I come across some nice custom unlicensed cards of the Pirates Franchise Face.

Because Hits Memorabilia doesnt have any licensing rights, they try to show images that are easiest to "airbrush" the logos out.

(Totally off topic question...will the cards still be referenced as having been airbrushed 30 years from now or will it just be called digitally removed?)

This card is sharp looking though. 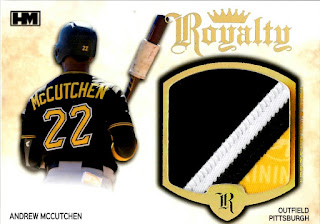 It has a simple design and a beautiful looking patch with the Spring Training  markings.

It was acquired for roughly Cutch's jersey number. 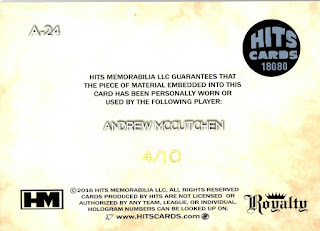 Let's reference what the material looks like as a whole 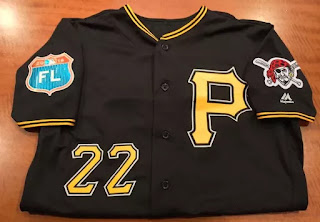 Not a bad looking jersey at all. Hopefully I can secure a nice card one day using that awesome Florida Grapefruit League patch.

The jersey used by Cutch in the production of this card is from a game worn on March 11, 2016. 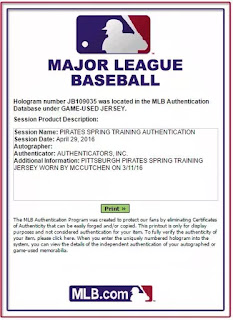 How did Cutch do that day?

Well, he went 1 for 2 with his first Spring Training Home Run of the 2016 season. I would say that's a nice card to have a jersey swatch from.

Posted by Collecting Cutch at 1:08 PM