It's been a few days since I last posted.

The reason is simple. I was enjoying Football Sunday. The Steelers somehow managed to win without scoring a touchdown, but giving up 2.  Chris Boswell set a post season record for kicking 6 field goals.

Last night I got caught up watching a handful of tv shows and then rewatched two amazing specials on the MLB Network. If you haven't watched Forever Brothers, the story of the 1971 Pirates the first team to field all minorities or School of Rickey, the Rickey Henderson documentary I strongly suggest you watch them next time they air.

One of my first posts here on Collecting Cutch was my favorite card of 2016. It featured Jolly Roger sleeve patches of  Cole and Kang along with a nice patch for Cutch.

Triple Threads is notorious for producing some really nice cards and some $6 triple relics. I try to avoid the latter.

In doing so, I went for the former. 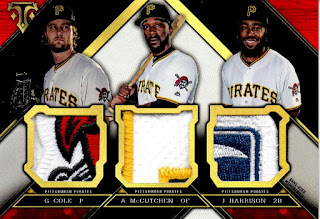 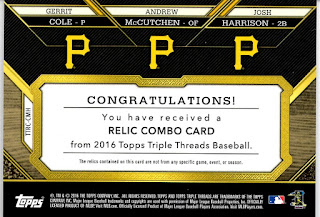 This red 1/1 cost as much as the emerald /3 which I unfortunately lost.

I will continue to seek out the other parallels now that I own the 1/1.

Posted by Collecting Cutch at 8:39 PM