What Could Have Been? A Failed 1/1

There's moments in life where we are at a fork in the road and we make a decision where we went right instead of going left.  Sometimes we look back and wonder "What could have been?"

Because I imagine none of you are friends with Doc Brown, we are all stuck living with the choices we have made.

Prior to the holiday season, I placed a very unique 1/1 card inside my scanner and then put it on my desk. The card was a redemption of sorts as you'll see later in the post. I wasn't sure if I was going to attempt to redeem it because quite honestly I didn't know if I would be a winner.

It's a rip card POTENTIAL redemption 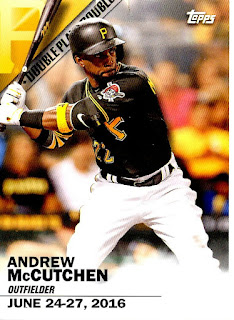 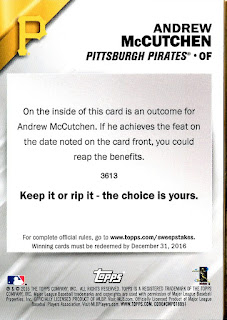 Inside is a 1/1 mini guaranteed. It could have also lead to a much bigger prize.

What did Cutch do between June 24-27?
He played all four games of the Pirates homestand hosting the Los Angeles Dodgers.

His batting line was 5/15 (including a double and 3 run Home Run). He collected 4 RBI, scored 3 runs, and walked once. He struck out 4 times, was caught stealing, and left 6 men on base.

It's too late to redeem the card if it was a winner, but I am stuck wondering What if?

Would you rip the card knowing you can't redeem it to answer the question or keep it unripped?

Posted by Collecting Cutch at 8:09 PM

Email ThisBlogThis!Share to TwitterShare to FacebookShare to Pinterest
Labels: 1/1, 2016, one of one, redemption, rip it, unripped