Since my collection has changed direction to only focus on Andrew McCutchen going forward, I need to come up with some interesting ways how to show off my over 1,400 unique cards of Cutch.

One method I think I will utilize is showing off a segment called Throwback Thursdays.
Is it an original idea? Nope
Will it be fun to see Cutch wearing uniforms from the 1909, 1971, and 1979 World Series Championship Pirates teams? Yup

So to kickstart this new monthly series I present to you Cutch's 2010 Topps Triple Threads card featuring a uniform worn by the likes of Hall of Famers Honus Wagner and Fred Clarke.

The Pirates wore this uniform in 2009 shortly after Cutch made his MLB debut to celebrate the Pirates 100 Year Anniversary of their 1st World Series Championship.

Anyone ever look at their favorite player to see how many cards you have of him wearing a Throwback uniform? 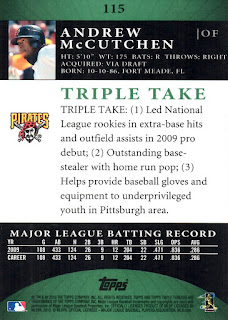 Above is the back of the emerald version of the 2010 Triple Threads card.

Posted by Collecting Cutch at 4:38 PM