I had already stopped collecting when the original Gold Label cards came out in the early 2000s.  That's probably a gold thing though because I would have probably over paid for Jason Kendall and Jason Schmidt cards from that time.

When the 2016 Gold Label checklist was released I saw that Cutch was listed which meant I would have to add and track down 9-12 cards if I was lucky to find the Gold 1/1s.

Well after a few months I have completed all 3 classes for the base, blue, and red. 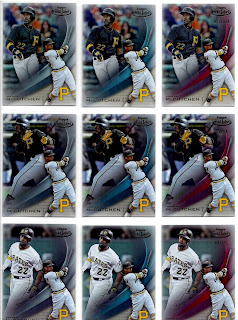 The base and reds were easy to track down even though the reds are supposed to be the rarest (golds excluded).

The hardest one for me to find? 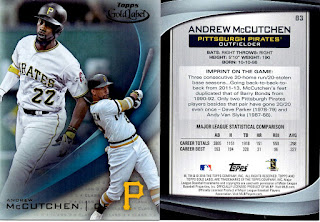 Why? I don't know.  Since release only a few have hit the market, but nearly a dozen of the Class 3 Reds (/25) have shown up for sale.  Weird, right?

The back of the card talks about Cutch's 3 consective 20/20 seasons from 2011 to 2013.  He was on track in 2014 too, but suffered an injury in retaliation for Ernesto Frieri ending Paul Goldschmidt's season.  The injury landed Cutch out of the lineup for nearly 2 weeks and limited his base stealing during the final month of the season.  He would finish two bases shy.

Posted by Collecting Cutch at 8:15 PM